Dozens of staff at a hospital have been filmed standing in silence for an emotional ‘walk of respect’ for a selfless dying organ donor.

The 53-year-old patient made his final journey along the fourth-floor corridor in the touching gesture at St Luke’s Hospital in Meridian, Idaho on Saturday.

Medical staff ceased all operations to line the walls of the hospital with a silent but emotional ‘walk of respect’ to the man.

The anonymous man was wheeled through the hallway in front of medics, family and friends, before being taken off of life support and passing away.

Staff at St Luke’s Hospital in Meridian, Idaho, gathered on the fourth floor corridor for an emotional ‘walk of respect’ for an organ donor as he was taken to have his life support switched off

The walk of respect has become a tradition at Idaho’s St Luke’s hospitals, and sees staff turn out to honour those giving the life-saving gift of organ donation.

A video posted on social media by the hospital shows dozens of staff standing in respectful silence as the terminally ill man is taken to be removed from life support.

The man is surrounded by the people who have been keeping him alive as he is taken on his final journey out of intensive care.

And medics standing in the halls were close to tears as, on Saturday September 27, the man became the second donor that week to receive the tribute.

‘I was moved by the number of people who made a point to be there,’ said Anita Kissee, the hospital’s PR manager who posted the video online.

‘There were not a lot of dry eyes – I too was wiping my tears. What a privilege to be invited to be there in that moving moment.’ 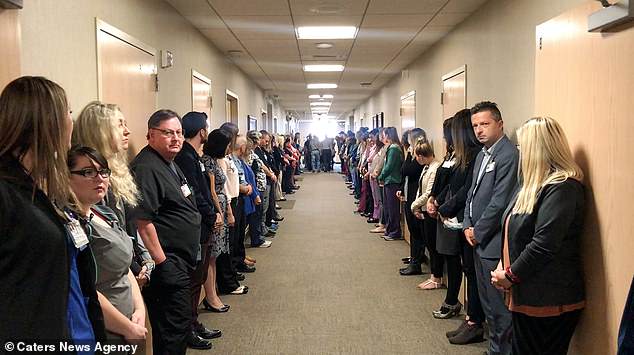 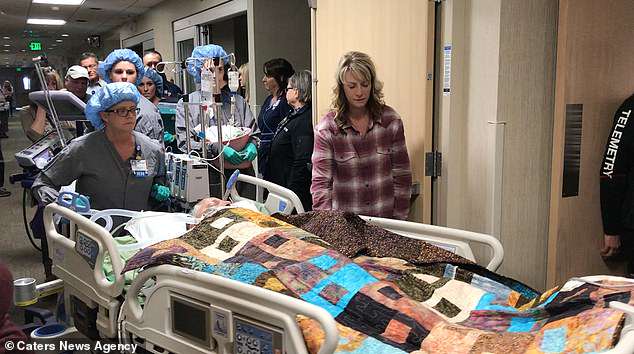 The man was the second person in a week to have received the walk of respect at the hospital, which has become a tradition for those who are taken to donate their organs when they die

A spokesperson for St Luke’s Health System, which runs the hospital, added: ‘It’s a way to pay tribute to the patient, their incredible gift of life, and support the family during a deeply emotional time.

‘The employees who are available at the time all gather on the fourth floor and line the halls from the ICU to the elevator.

‘We had two this week, which is unusual.

‘Each of our hospitals have their own version of this, but Meridian is the largest.’

There are more than 114,000 people in the US on the waiting list for organ donation, but only around 0.3 per cent of people die in a way which means their organs can be used.

And while 75 per cent of adults in the country support organ donation, according to government statistics, only 54 per cent of people have signed up.

The most commonly transplanted organs are kidneys – which can be done when donors are still alive because people have two but can live with one.

After this the liver, heart and lungs are most commonly transplanted, but all must be taken from dead donors.