Tadej Pogacar won stage 15 of the Tour de France to close the gap on race leader Primoz Roglic as Egan Bernal’s defence of his title was ended on the unforgiving slopes of the Grand Colombier.

Pogacar took victory and bonus seconds on the line just ahead of fellow Slovenian Roglic, cutting his deficit to 40 seconds as the general classification received another shake up at the end of the 174.5km stage from Lyon.

Bernal began the day third, 59 seconds down, but cracked early on the 17km climb to the summit finish and surrendered more than seven minutes to tumble out of contention.

That the Colombian was dropped at a time when Roglic’s Jumbo-Visma team-mate Wout van Aert – a man who has won two sprints in this Tour so far – was setting the pace on the front suggested his problems ran deeper than mere fatigue.

The 23-year-old’s collapse means the Ineos Grenadiers, formerly Team Sky, are out of contention going into the final week of race they have won in seven of the past eight years.

Now it appears to be a battle of two Slovenians, and two close friends who may find those bonds tested over the next week.

“It was a really difficult stage and in the end I was waiting for the sprint so I’m happy to win again,” said UAE Team Emirates’ Pogacar, who doubled up on his stage nine success.

“I don’t know what happened (to Bernal) but Jumbo did a really high pace and some riders paid for it.”

With the race heading into a rest day on Monday before the final battle for yellow, the 21-year-old Pogacar added: “For the moment (Roglic) looks unstoppable but today Bernal cracked, one day maybe I can crack, or Roglic. 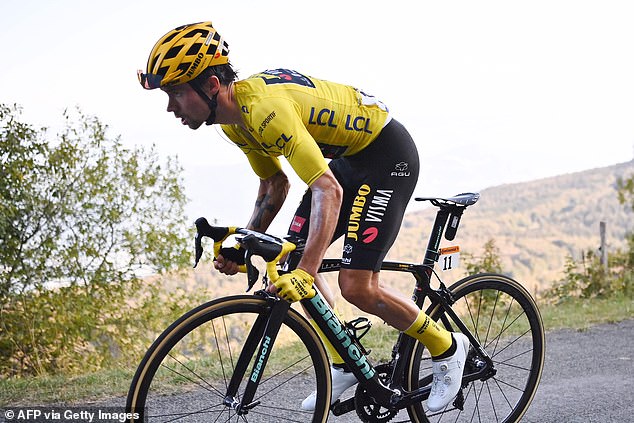 “You never know in a three-week stage race so there are still opportunities.”

Van Aert ate into half the mountain before pulling over, dropping back to follow Bernal over the line some seven minutes and 20 seconds down.

Adam Yates tried an ambitious attack seven kilometres from the summit but it did not last long before the Mitchelton-Scott rider dropped back in, and at the end of the day he found himself moving up in the general classification as others dropped away. 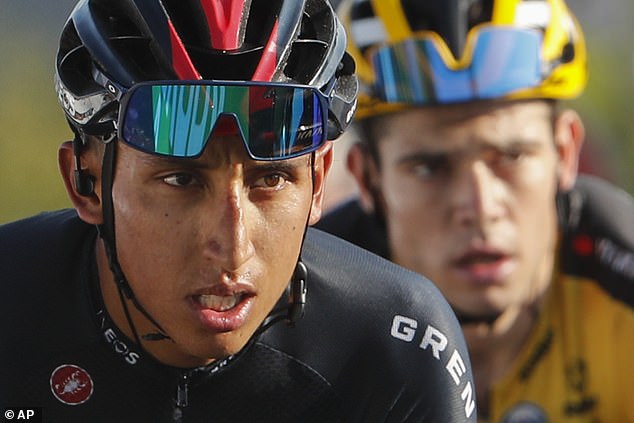 Rigoberto Uran now moves up to third, a minute and 34 seconds down from Roglic, while Yates sits fifth, two minutes and three seconds from the yellow jersey he held for four days last week.

“I wanted to try something just before the rest day,” Yates said. “I’ve been getting better day by day. I didn’t want it to come down the last kilometre or two because on previous days I’ve waited and suffered to hold the wheel.

“I went and tried to get over the steep bit to the flatter section for a rest, but Jumbo weren’t happy with me trying something so reeled me back.

“But overall the sensations were good. It’s a rest day and then hopefully some good stages in the Alps.”