Riders of the Tour de France have pleaded with fans lining the climbs to keep their masks on reduce the spread of the coronavirus.

During Saturday’s first stage in the Pyrenees mountains, many spectators did not respect the two-meter distance required by organisers as they cheered their favourite riders.

Others were pictured with their masks below their noses and chins as the peloton made it’s way up the mountain as social distancing proved difficult to be enforced along parts of the 87-mile stretch of road.

‘It’s definitely an issue,’ said Sunweb’s Nicholas Roche. ‘I think the photographs say it all. I had mixed feelings when I saw the fans on the Peyresourde and started getting goosebumps with the adrenaline again. I was like, “ah this is the Tour” and next thing straight away I was like, “no, this cannot be right”.’

To access the climbs, race-going fans would need a bike and a mask, making the pictures of those wearing a facemask under their chins even more staggering.

‘They had it underneath their chin so they could shout but you can also shout with your mask on,’ Roche continued. ‘Unfortunately, it’s quite difficult to control…hopefully there will be more controls but I also feel sorry for the policemen who are fighting up there against all of that.’

This year, on the rest day after stage nine, riders and sports directors will undergo a coronavirus test in a bid to reduced it’s spread. 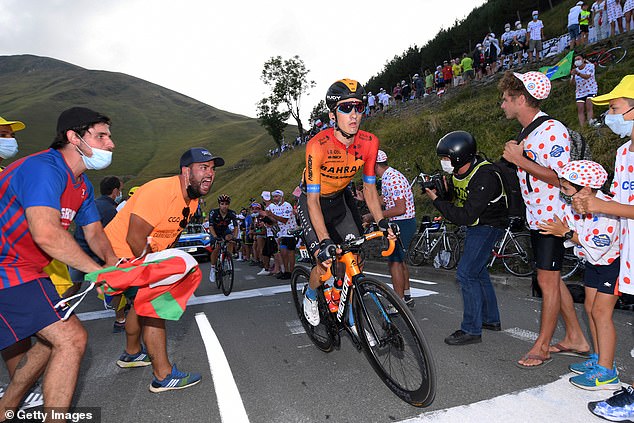 In addition to their recovery routine, the 166 remaining riders will stay in their own ‘bubble’, with a Damocles sword hanging over their head as they will undergo coronavirus tests that will decide whether they can keep on racing.

Tour de France organisers said about 650 tests will be performed. Some took place on Sunday, with the majority of riders being tested Monday.

Although test results are not expected to be unveiled before Tuesday, teams will soon find out whether the virus has contaminated the race bubble.

‘It would really be a shame to see a rider excluded from the Tour de France because he has been cheered on by not attentive enough fans,’ Cofidis team manager Cedric Vasseur said.

The next round of testing could indeed throw the race into turmoil. Anyone who tests positive will have to leave the race and any team with more than two positive tests – either rider or staff – within seven days will be thrown out.

‘If you’ve got it, you’ve got it,’ Dan Martin said. ‘It’s not your fault and I think the biggest fear of everybody is the false positives. Obviously, if you’ve got it it’s for the greater good that you have to go home. 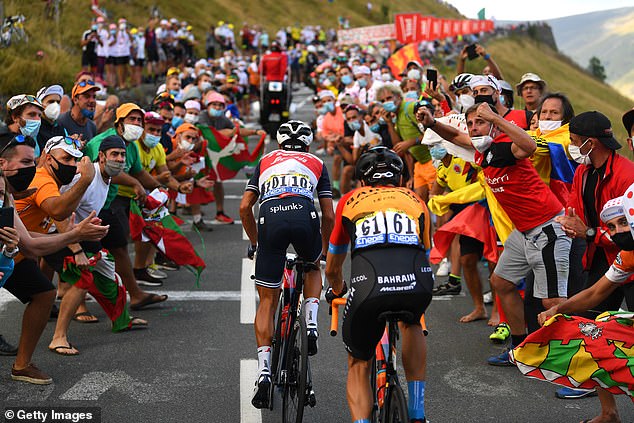 ‘You have to 100 per cent understand that. But if you don’t have it and you just had a false positive and then you go home that’s not fair. We’ve just got to hope we still have 22 teams with us on Tuesday.’

‘It is something that is in the riders’ mind,’ Roche added of the Monday test. ‘And it would be wrong if it wasn’t because everyone’s scared that the race won’t go on. It’s as simple as that.’

Under threat of cancelation at some point – more than 30,000 people in France have died after contracting the coronavirus, making the country one of the hardest-hit in Europe – the Tour has been salvaged by pushing it back from its traditional July date to end of the summer.

The price paid for the race to be run is a heavy sanitary protocol which includes mandatory COVID-19 testing for riders and teams staff members on rest days.

All were tested before the Tour started in Nice and have since lived in the race quarantine, making sure they stayed away from fans and sponsors usually omnipresent during the three weeks of the popular event.

After four staff members of the Belgian team Lotto-Soudal were sent home following abnormal coronavirus tests on the eve of the Tour, the race has been run without any further COVID-19-related incidents. 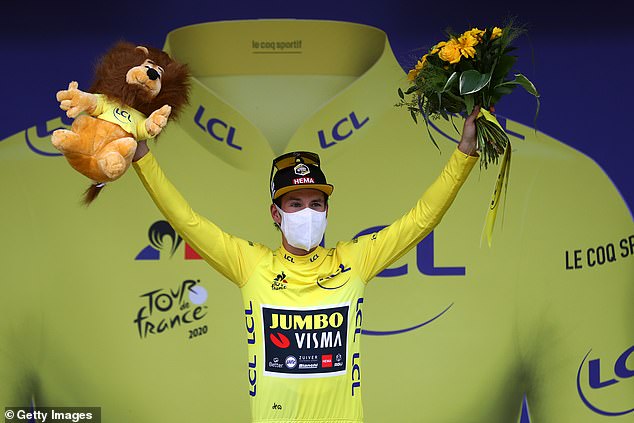 To avoid false positive results that could rule healthy riders out of contention, Tour organisers have said they will try to perform a retest and a blood analysis as quickly as possible. They have set up a mobile coronavirus lab that can produce results in two hours.

Following Sunday’s final stage in the Pyrenees, where Primoz Roglic of Slovenia seized the race leader’s yellow jersey, the 22 Tour teams have traveled by bus to the western Charente region. The race resumes Tuesday with a flat stage linking two islands, the Ile d’Oleron and the Ile de Re.