A woman with Tourette’s syndrome says she was made to feel as though she cannot return to a favourite family holiday spot because of her condition.

Kate Marsh’s family has a pitch at the Bryn Gloch caravan park in Betws Garmon, Caernarfon, and her mother had told the owners that she would be using it from time-to-time, and alerted them to her condition.

But the 34-year-old’s mother said that during their last stay, she was told her daughter Miss Marsh could only come back if she stopped using foul language, effectively ‘banning’ her.

The comments came despite the family making her condition clear and telling the owners she wasn’t being intentionally rude.

Kate Marsh and her fiance Nick walking in Snowdon during one of their stays at Bryn Gloch caravan park in Betws Garmon, Caernarfon. She says she feels she can’t go back there now

The park’s owner, Eurig Jones, said no-one had been asked to stop coming to the park, but did not comment on the allegations Miss Marsh had been told she could return as long as she did not use ‘abusive’ language.

Miss Marsh’s mother Kerry said: ‘I was with my husband on the site over the bank holiday weekend and we were about to go out for the day.

‘Eurig told us he’d been meaning to have a word with us about our daughter and said he’d received a complaint about her abusive language.

‘When we first arrived on the site in October last year we did tell them that Kate and her fiancé would be visiting the site on occasion and we made them aware that she has Tourette’s.

‘There didn’t seem to be a problem at the time but he told us on Saturday that she can’t be on the site if she’s going to abuse people.

‘Kate has never been deliberately abusive to anyone in her life. She has a disability and she can’t help the things she says.

‘He just kept saying that she wasn’t banned, but she couldn’t come to the site if she was going to use bad language.

‘We explained that sometimes bad language is part of her condition – you can’t tell a person in a wheelchair that they can come in if they leave their wheelchair at the door. 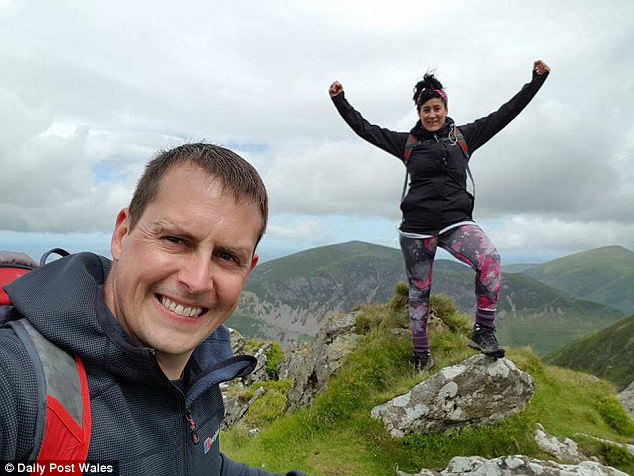 Miss Marsh, with fiance Nick, in Snowdon. She claims she was told she could come back if she didn’t swear, which she can’t help because of her Tourette’s, but the park denies she isn’t welcome to stay again

‘Unfortunately Kate can’t leave her tics at the gate and she does make every effort to apologise to people when she does have tics as she doesn’t want to offend anyone.

‘Her outbursts aren’t directed at anybody, it’s just her brain making her say things that she can’t control.

‘I’m so upset for her because the condition can be very tiring and draining and she used to enjoy coming here for a bit of respite to go walking with no one around, but it’s been ruined.’

The family has now decided to remove their caravan from the park, saying they have been left ‘devastated’ by the incident.

It brought back unhappy memories for Miss Marsh, 34, as she was kicked out of a branch of Costa in Porthmadog in May last year after an involuntary outburst.

The chain later apologised and asked her to help them with their staff training. 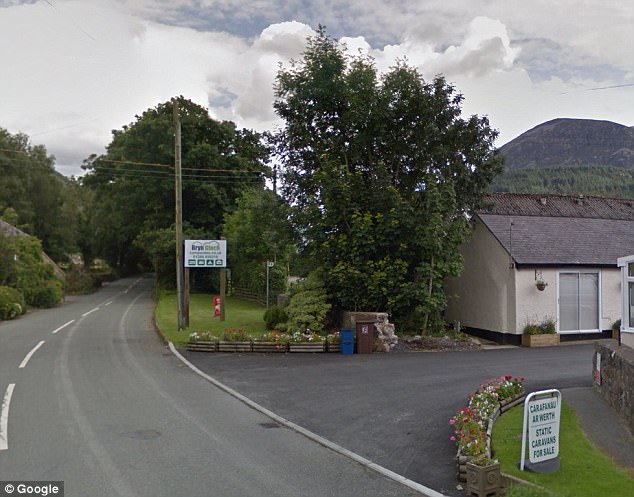 Bryn Gloch in Betws Garmon, Caernarfon, where the Marsh family has now removed their caravan, after daughter Miss Marsh was left feeling like she could not go back

Miss Marsh said she was frustrated people were not more understanding about her condition.

She said: ‘I really looked forward to going there on holiday and it’s like a slap in the face.

‘I’m being blamed for something that I have no control over and I’ve really had enough.

‘There’s no need to be treated that way.

‘My stress-free getaway has been taken away from me.

‘I wish for one day the world could experience Tourette’s and see how hard it really is.’

Caravan park owner Mr Jones denied that Miss Marsh had been banned from the site.

He said: ‘The Marsh family have never been asked to leave the site for any reason and it is their decision to remove their caravan.

‘They were contacted on August 27 and it was emphasised that they are welcome to continue to use their pitch until 31 October 2017, which is when our contract with them finishes.’