Tourist captures amazing snaps during a holiday to IRAQ

A trip to Iraq probably isn’t on too many bucket lists.

After all, violence and terror attacks there are very likely – over 3,000 civilians were killed last year. The UK Foreign Office advises against all but essential travel to the country.

But one seasoned traveller went anyway – and captured some amazing holiday snaps of things you might not associate with Iraq, such as funfairs and high-speed trains, and some things you would, such as bullet-ridden armoured vehicles. 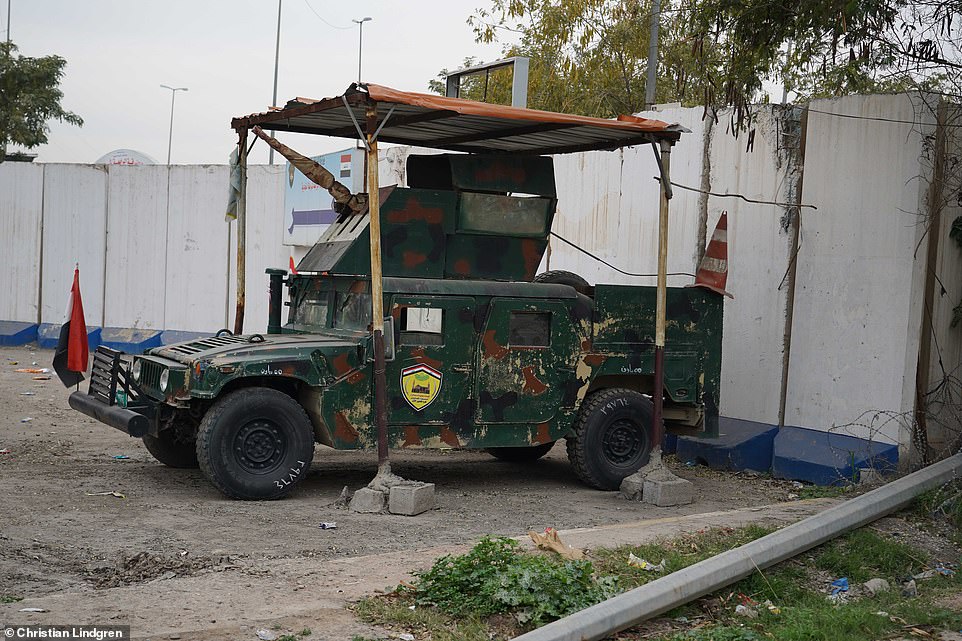 A Shia militia car parked up at the side of the road in Baghdad. Christian says he found the militia to be very friendly and helpful 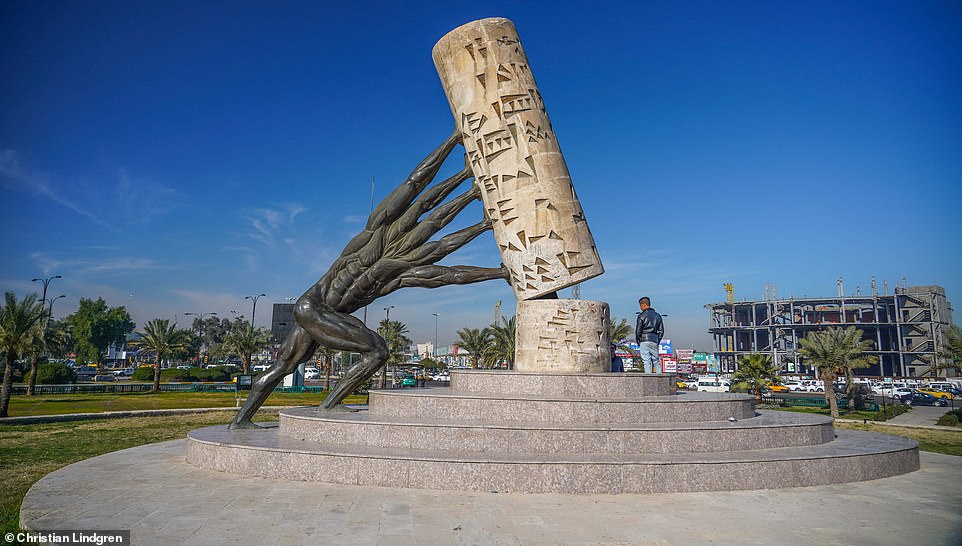 Christian came across this unusual statue in Baghdad. It was created by sculptor Mohammed Ghani Hikmat, who was commissioned to create a number of pieces in 2010 at the end of the Iraq War 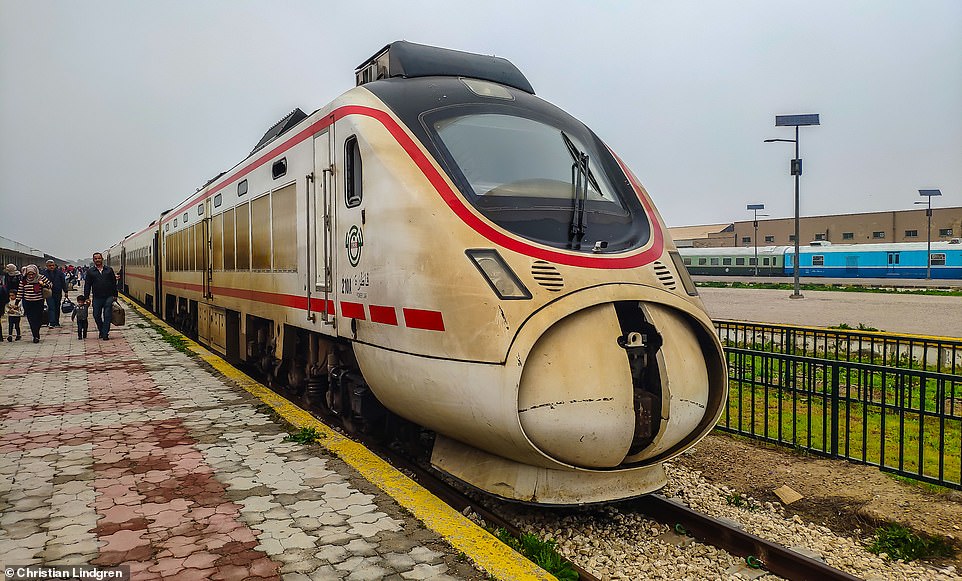 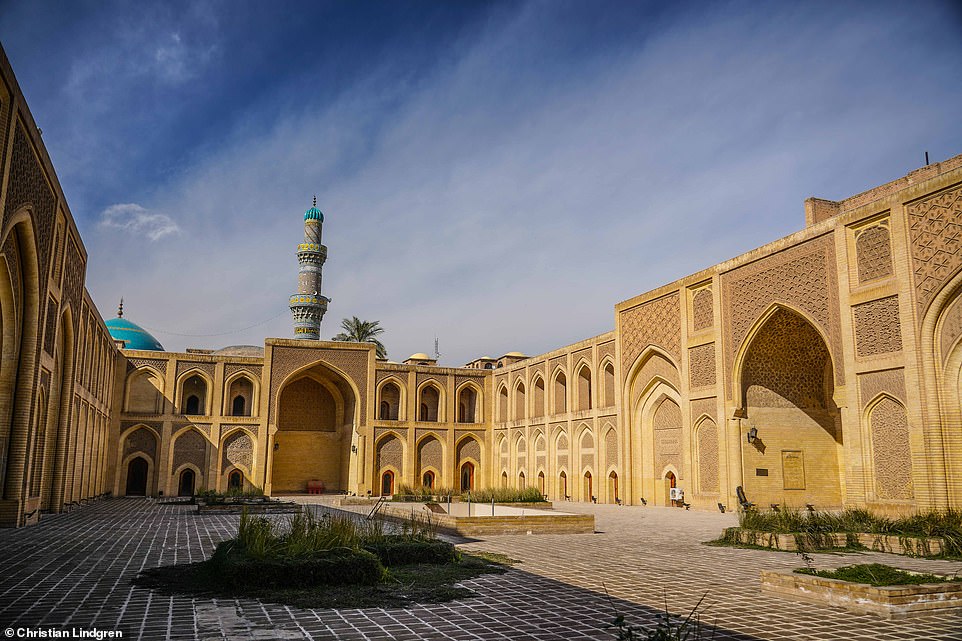 The beautiful Mustansiriya Madrasah building on the banks of the River Tigris in Baghdad. It was a medieval school complex that is now part of the Al-Mustansiriya University

Christian Lindgren, who is originally from Norway, made it to the Iraqi capital Baghdad via Istanbul in February after a ‘nightmare’ visa-approval process – which took months.

The 30-year-old told MailOnline Travel that he had been itching to visit Iraq for a long time.

Christian explained: ‘I have travelled extensively around the Middle East over the years, and Iraq was one of the last countries I had yet to visit in this region.

‘From my previous travelling experiences in the Middle East, I knew that most parts of the country would be safe, if I kept clear of the regions bordering Syria.’ 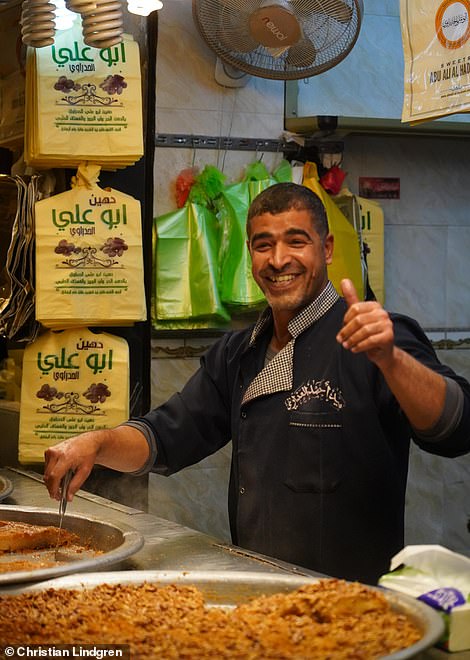 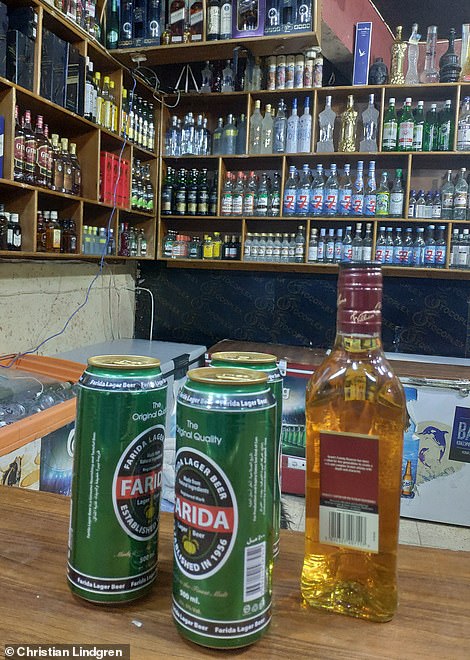 Christian says all of the locals that he met on his journey were very friendly. Pictured right is the beer and ouzo on sale in one of Baghdad’s many alcohol shops 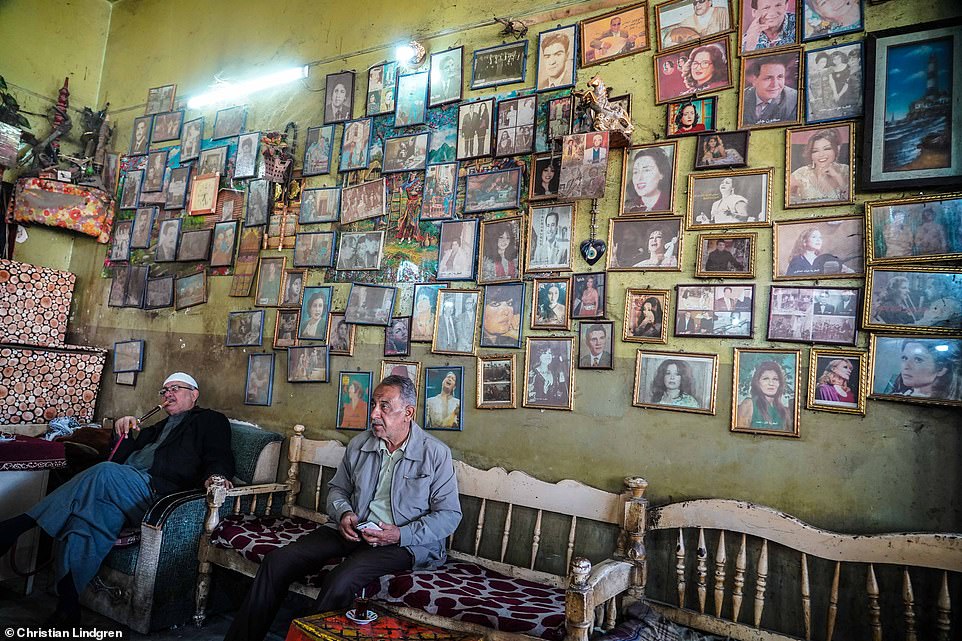 Two men sit and enjoy tea and shisha in a traditional tea house in Baghdad. Christian says many of these tea houses are over 100 years old 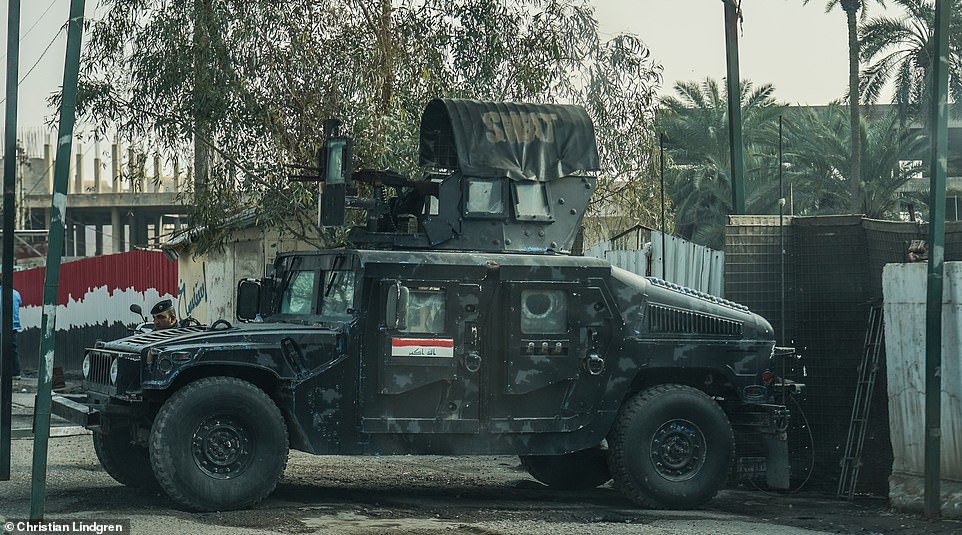 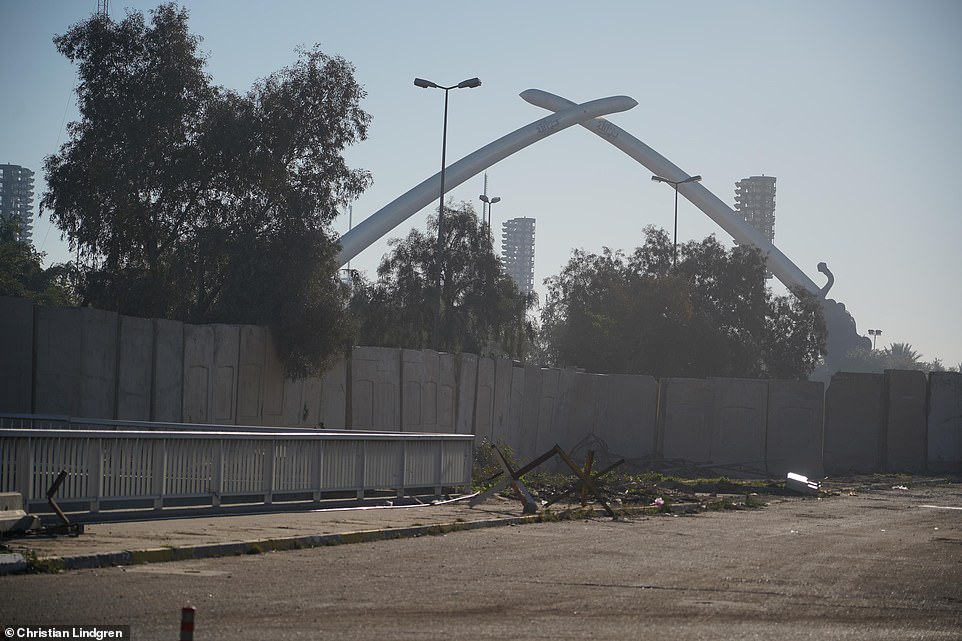 Christian captured a shot of the Victory Arch, which is located in the international zone of Baghdad

Despite mainly feeling safe in Iraq, Christian did see the after-effects of war, including this ship wreck in the Shatt-al-arab river in Basra 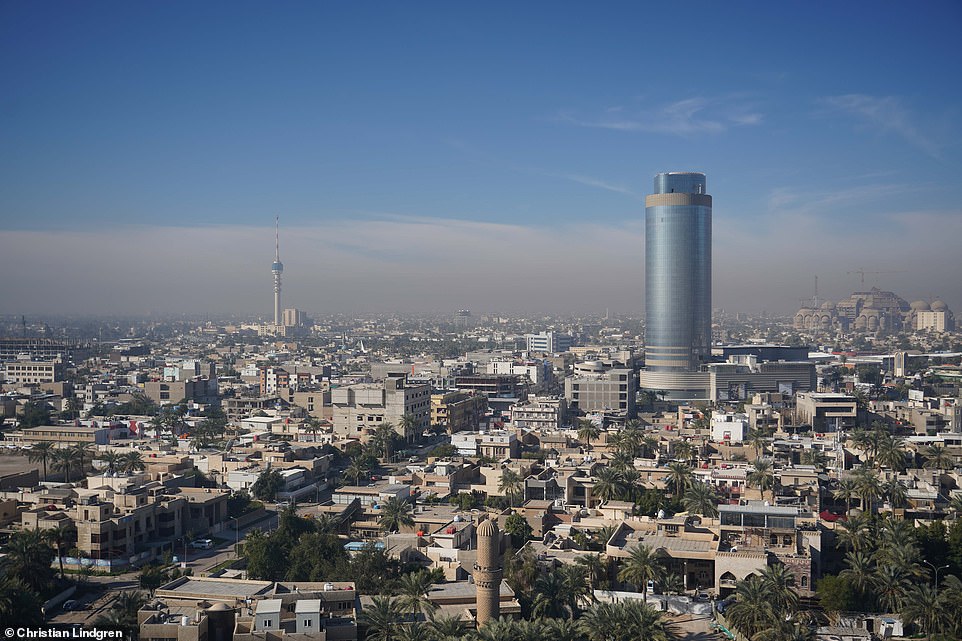 The first place Christian visited was Baghdad and his first impression on entering the city was how normal life seemed.

He recalled: ‘I thought, where is the destruction? It sounds strange but Baghdad is like any Middle Eastern city, the streets are full of life.

‘Yes, you do have military checkpoints on about every single street around Baghdad, but after only a few hours will you completely forget about them.’

His favourite thing about the city was its bustling social scene, the buzzy restaurants and cafes. Some shops even sell alcohol. 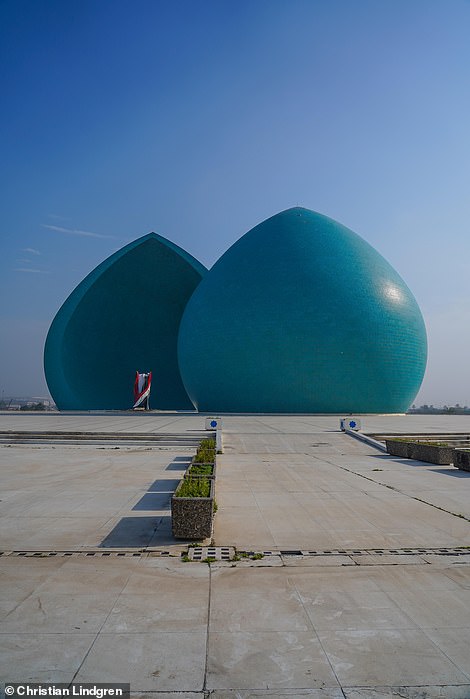 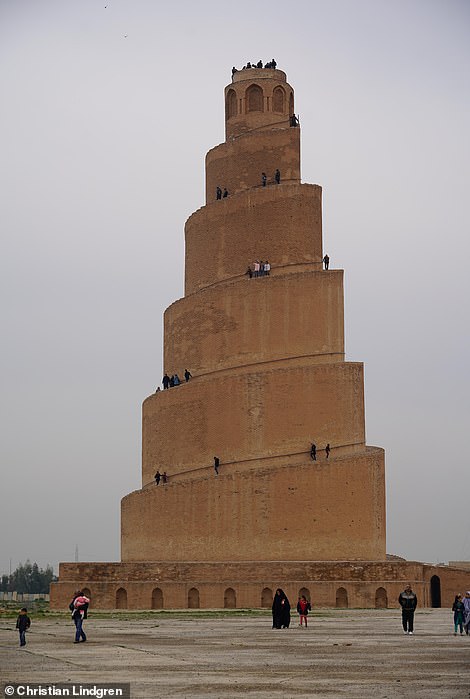 The beautiful Al-Shaheed Monument in Baghdad, which is also known as the Martyr’s Monument and dedicated to those who lost their lives in the Iraq-Iran war, left. Pictured right is the Samarra Mosque, one of the holiest sites in Iraq 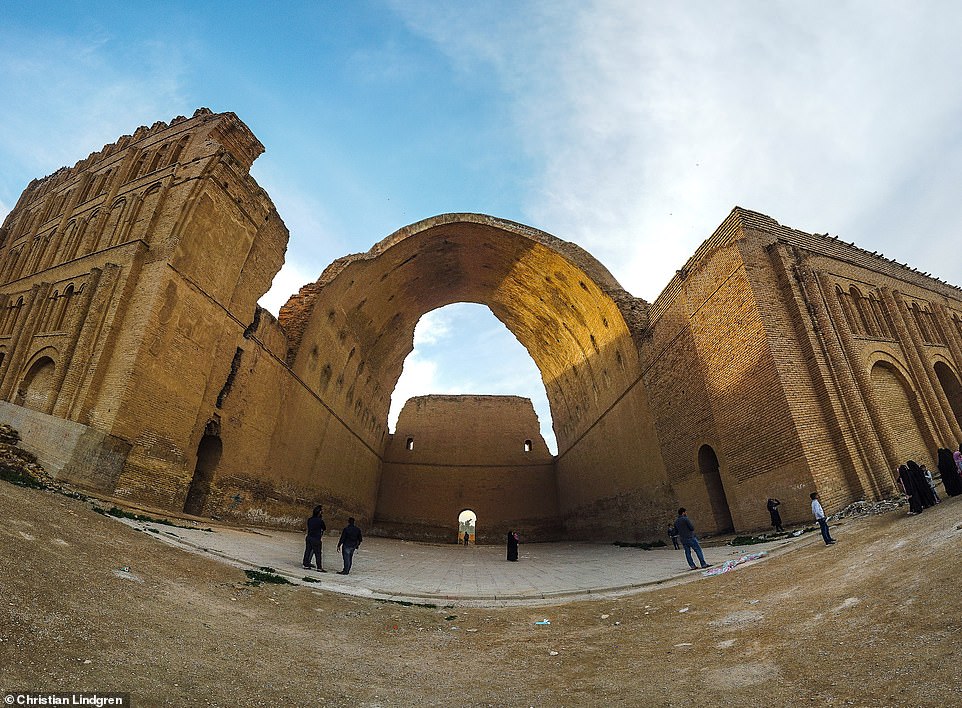 Christian visited the ancient city Ctesiphon, the last Persian capital. It was close enough to Baghdad for Christian to take a day trip there 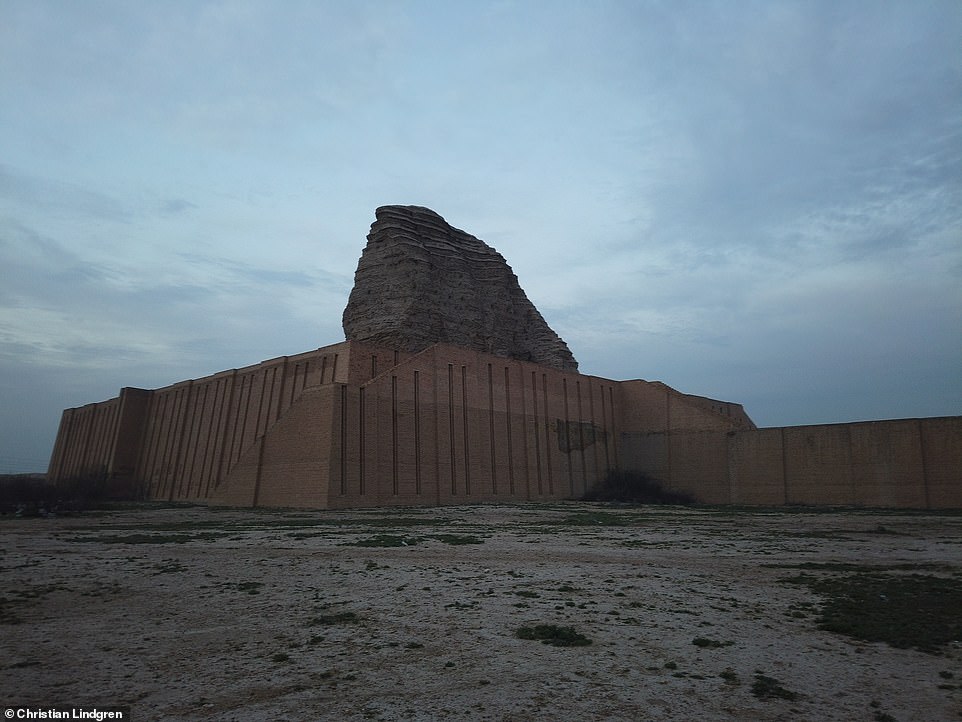 The ancient city of Ziggurat of Dur-Kurigalzu, which was built more than 3,400 years ago in southern Mesopotamia, close to modern-day Baghdad

Christian continued: ‘Streets all over Baghdad are lined with food stalls crowded with locals.

‘Traditional tea houses, which been open for more than 100 years, are still full of local people and restaurants are packed with families until late.

‘There were coffee shops that looked like they could have been anywhere in Europe, filled with young Iraqis working on their laptops while having a freshly brewed cappuccino.

‘I also saw alcohol shops selling locally produced Iraqi beer and ouzo in public, and not hidden away like you would find in other Middle Eastern countries.’

Christian also travelled to other towns and cities in Iraq that are considered safe. 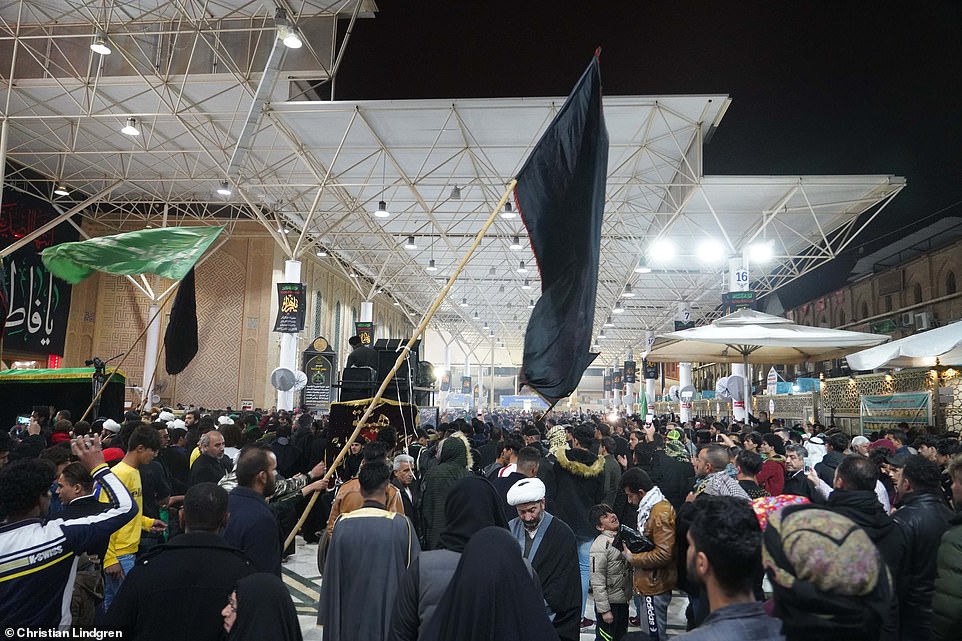 While in the holy city of Najaf, Christian came across a street celebration, where people were waving flags and taking pictures on their phones 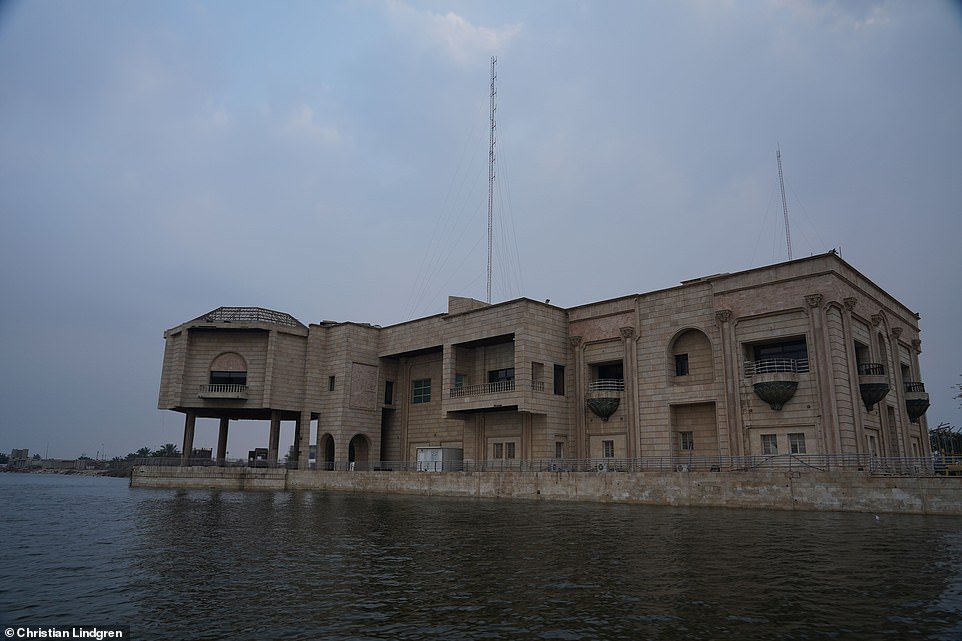 On a trip to the southern city of Basra, Christian captured this image of Saddam Hussein’s former palace on the banks of the river. It is now home to the city’s museum

His first stop was the holy city of Samarra, then Najaf, Karbala and Kufa, which are three of the most sacred places in Shia Islam.

He also paid a visit to the ruins of Babylon, home to Saddam Hussein’s former palace, which has been completely looted.

Christian next made it to the Mesopotamian Marshes on a boat trip before heading to the city of Basra.

When heading back to Baghdad he took an overnight train from Basra, with the locals.

He said: ‘The locals are extremely friendly and welcoming. I only have good things to say about them.

‘Like in every other place in the world that receives mostly bad publicity in the West, the locals are eager to show you that they are just like you. 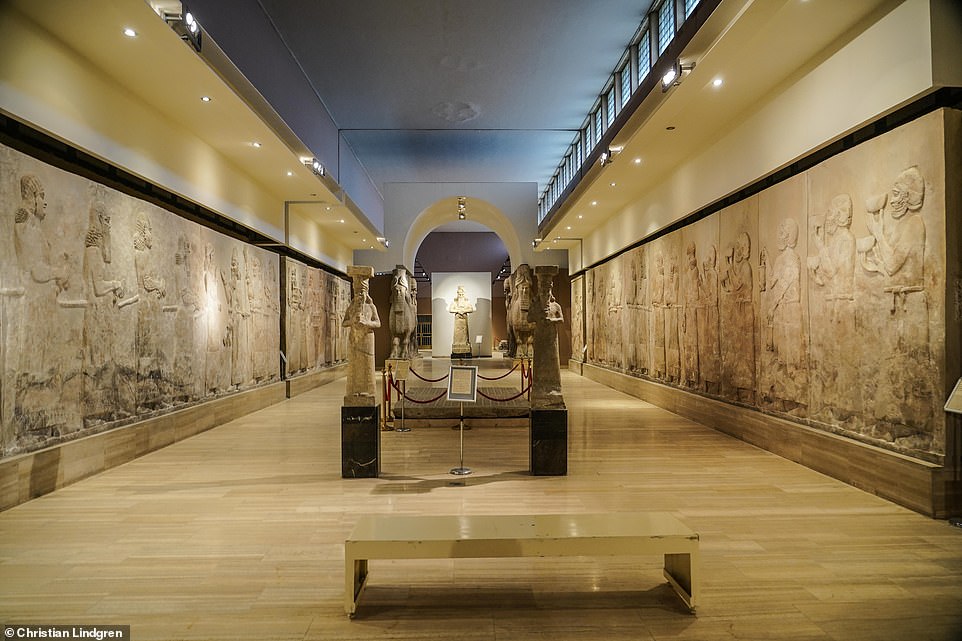 Some of the extremely intricate artwork on display inside the National Museum of Iraq. It was looted during the 2003 invasion of the country 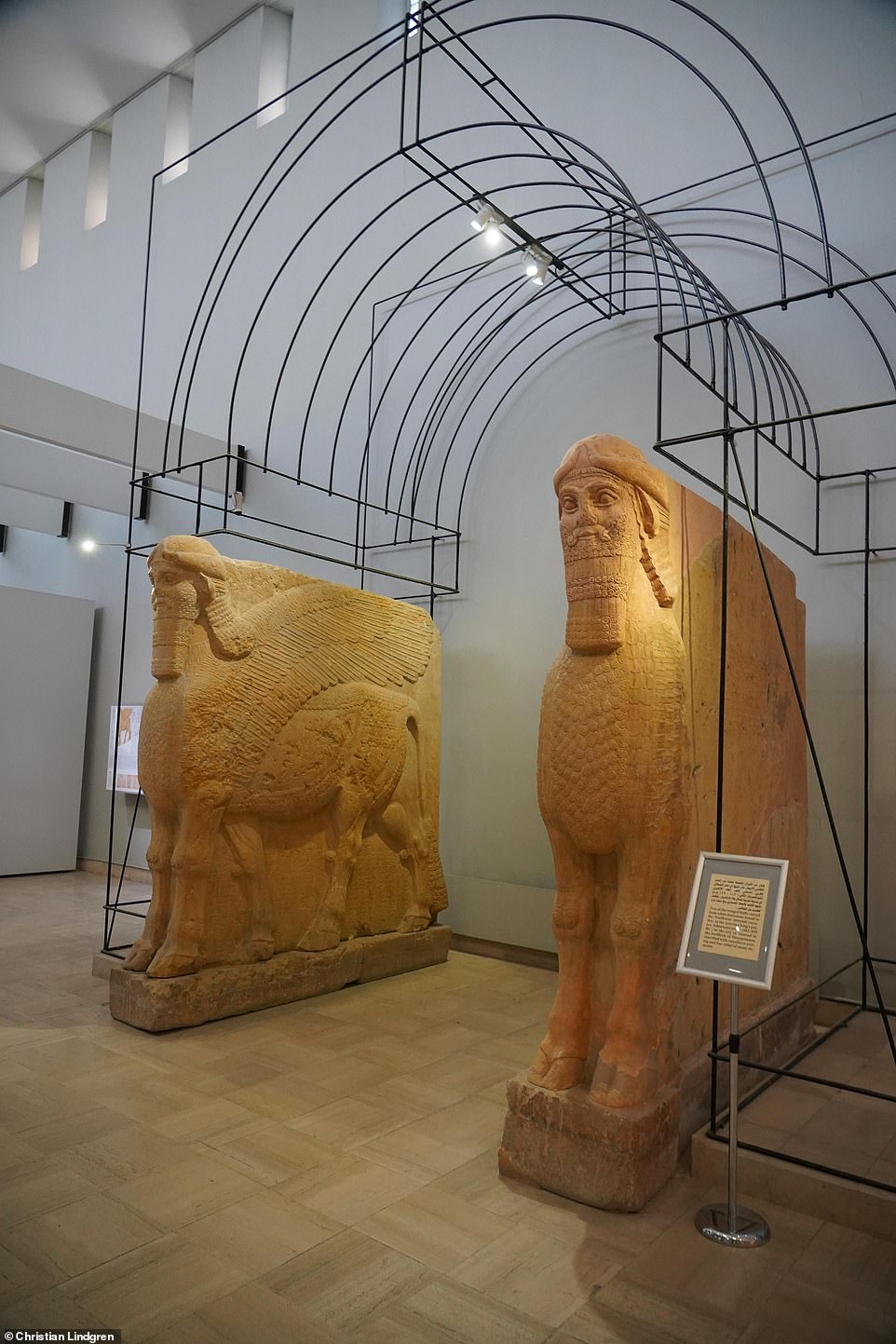 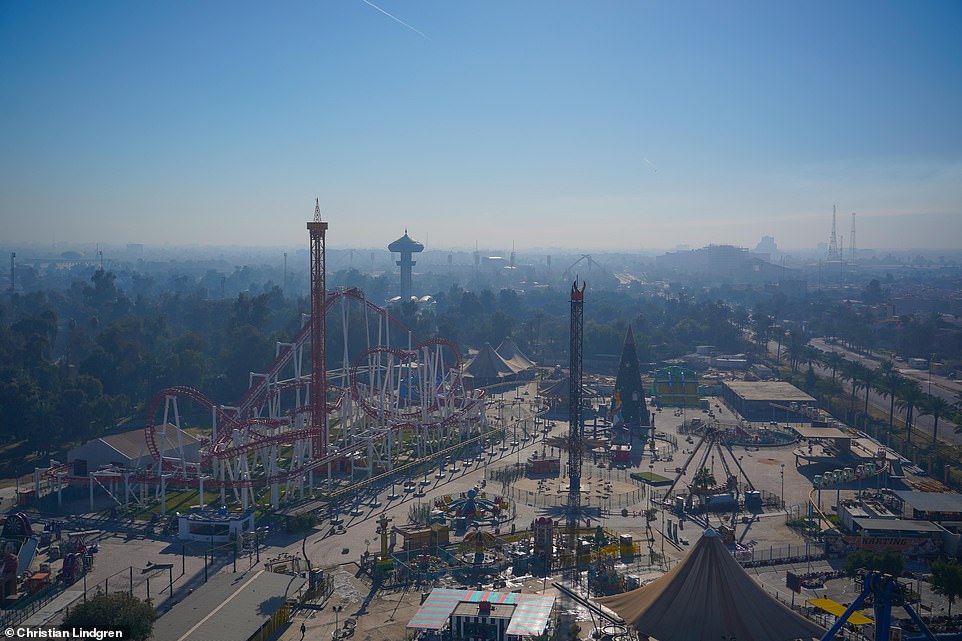 An overview of the amusement park in Baghdad that is located within the city’s zoo. Animals have now returned there

‘I probably set a new personal record in taking selfies with locals. Also, the local Shia militias around the country were nothing but friendly.’

Christian says he would recommend a trip to Iraq to any experienced traveller, so long as they have a local guide to travel with who knows about the security situation.

He said: ‘I’m extremely happy I visited Iraq. And if I get the opportunity to visit Iraq again I will revisit without any doubt at all, but the security situation can change fast.

‘During my visit to Iraq I did not feel unsafe for even a second. But you can’t forget that extremism is still a huge problem in Iraq.

‘During my visit to Baghdad two separate small bombs went off, killing a few soldiers.

‘I never saw or heard anything, and if I hadn’t been specifically googling the news, I would never have known it had happened.’