Tourist is forced to wrestle a monster crocodile in remote Queensland

A tourist has narrowly escaped death after being attacked by a massive freshwater crocodile in North West Queensland.

The victim, aged in his forties, was swimming in a gorge at a remote national park around 2pm on Sunday when a crocodile latched onto his arm.

The man, who was on a motorbiking tour group, fought back, wrestling with the croc until its jaws opened and released him.

As well as injuries to his arm, he suffered puncture wounds to both hands and his leg, during the ordeal.

After the attack tour members called triple zero then drove the injured tourist to a nearby airstrip, to meet the rescue chopper.

The Mount Isa RACQ LifeFlight Rescue crew rushed to the remote location just after 2pm and airlifted the man to Mount Isa Hospital in a stable condition.

‘He was in a lot of pain and the puncture wounds from the croc’s teeth were very deep,’ RACQ LifeFlight Rescue Aircrew Officer Greig Allan said. 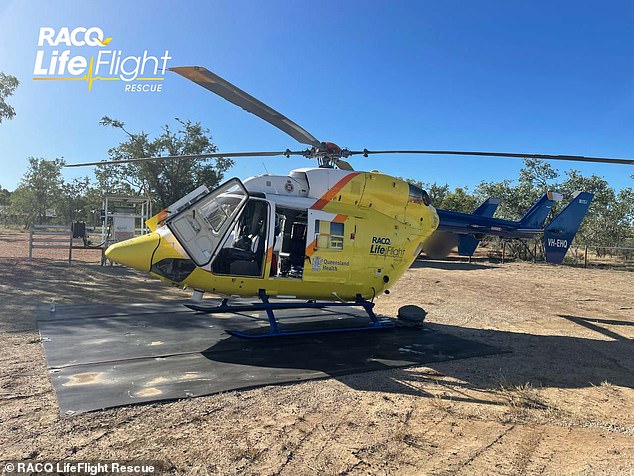 The man told rescuers (pictured0 he put up a fight against the massive croc, which eventually led to it releasing him from its jaws

‘The patient told us the salt water crocodile would have been between two and three metres long, so he’s lucky to have escaped with his life.’

The close encounter comes just weeks after a woman was mauled by a freshwater crocodile while swimming at a popular tourist spot in Western Australia.

The 38-year-old was bitten on the leg while enjoying a dip at Butler Cove, Lake Argyle, in the remote Kimberley, on May 4.

She suffered serious leg injuries and was rushed to Kununurra Hospital before being taken to Broome Regional Hospital in a stable condition.