One royal family fan got an unexpected Christmas surprise when her boyfriend proposed to her live on Sky News as they queued to catch a glimpse of Meghan Markle.

American couple Mike Metz and Ashley Millican, both 20, were waiting to see the Queen, Prince Harry and his fiancee at Sandringham when Mr Metz popped the question.

Mr Metz got one one knee when Sky News correspondent Rhiannon Mills asked why it was so important for them to come and see the royals on Christmas morning.

He pulled out a ring and said: ‘I want to spend the rest of my Christmases with you Ashley, so I don’t know if you want to marry me?’

Putting her hand to her mouth and fighting back tears, she replied: ‘Yes. Oh my God’, saying ‘Yes, yes, yes’ as she took the ring from the little white box.

The couple were waiting for the royals to attend a Christmas Day service at St Mary Magdalene Church, on the Queen’s Sandringham Estate, while they visited the UK to see a relative from Wisconsin.

‘I’m feeling great, excited,’ Mr Metz told Mills, who had been tipped off about the proposal.

American couple Mike Metz and Ashley Millican, both 20, were waiting to see the Queen, Prince Harry and his fiancee at Sandringham when Mike popped the question

Miss Millican, from Texas, said the proposal came as a complete surprise.

‘I had no idea,’ she said, adding: ‘I was definitely very surprised. I never thought he would ask me right before we were about to see the Royal Family for the first time.

‘It was a big surprise. It’s my grandmother’s ring, it’s very pretty.’ 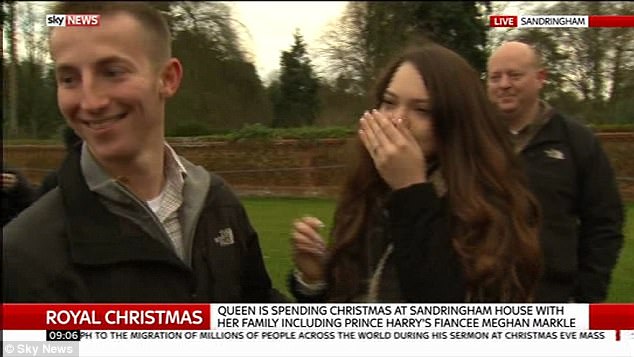 Mr Metz, of Wisconsin, said he started to plan the proposal in August, asked Miss Millican’s parents in September and was nervous ahead of the day.

He said the couple planned to tie the knot in around 18 months’ time and would ‘absolutely’ watch the royal wedding.

‘It was pretty tough to keep secret as I was so excited,’ he said. 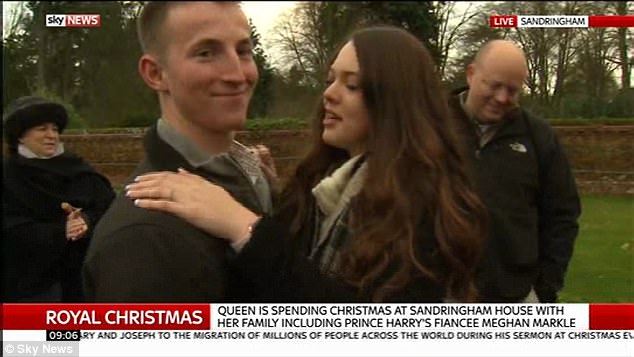