The tow truck driver failed to secure the white Volkswagen Beetle and let it veer into other cars parked on the street. It damaged at least four cars as it headed towards the main road.

A towing truck driver has been spotted slamming a loosely secured car into four vehicles parked along the streets in south-east London.

Shocking footage taken by an onlooker on November 16 shows the reckless driver pulling a white Volkswagen Beetle down a quiet neighborhood in Abbey Wood, southeast London.

The clip has been garnered more than 6,500 views and viewers were shocked by the driver’s bizarre stunt

The white truck drives past the cars parked on both sides of the street, veering the Volkswagen into a grey four-door car and damaging both cars’ bumpers.

As the driver hurtles further down, the car swings to one side, hitting a dark-colored van with a loud thud and another similar one parked behind. 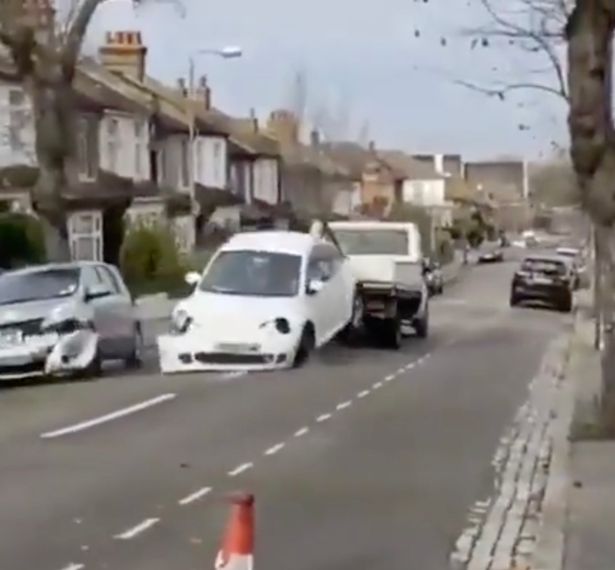 The tow truck driver slammed the white car into a grey vehicle, breaking both bumpers

The parked cars are left with visible dent marks on the doors and the trunk.

A motorist can be heard making constant horns in an effort to warn the tow truck driver.

But they drive off to the main road, leaving an expensive trail of carnage behind.

A woman can be heard screaming: “Oh my God!” 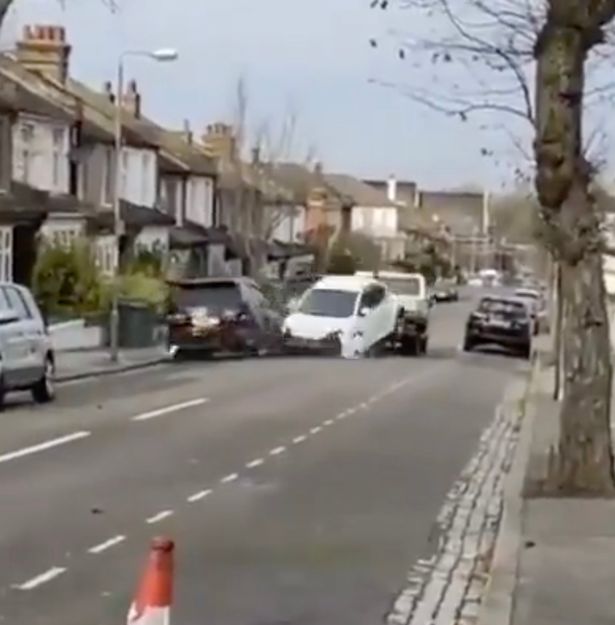 They carried on hitting three other vehicles down the road

It is not sure whether the car owners found out the damage shortly after the disastrous hit.

The clip has been garnered more than 6,500 views and viewers were shocked by the driver’s bizarre stunt.

One wrote: “Even if the driver were stone deaf and couldn’t hear the crashing sounds, they would feel the impact so yes, certainly the driver couldn’t care less.”

Some demanded to know the towing company so that it would remind them “never call them”.

Another compared the scene to the action video game Grand Theft Auto.

The Metropolitan Police have since confirmed that the car was stolen.

A spokesman told the Daily Star: “We are aware of footage circulating on social media that shows a truck towing a Volkswagen colliding with parked cars in Greenwich.

“Police were called at 12.45 pm on Monday, 16 November to reports two cars having been stolen from Federation Road, Abbey Wood.

“Officers attended. At the scene, a Vauxhall Zafira and a Volkswagen Beetle had been stolen from a residential car park.

“As the suspects left the scene in the tow truck, the Volkswagen, which was not properly secured to the vehicle, collided with six parked cars on both Federation Road and Congress Road.

“The tow truck, with the VW still attached, was recovered after being found abandoned in the Abbey Wood area.

“At this early stage, there have been no arrests. Inquiries continue.

Chief Inspector Peter Bodley added: “We fully understand the upset and inconvenience caused to the owners of the stolen and damaged vehicles involved in this incident and are undertaking inquiries to locate the outstanding stolen car and to identify those responsibly.

“If you witnessed any part of this incident but have not yet spoken with police please do get in touch without delay.”

Anyone who has information or footage but has not yet spoken with the police should call 101.