The family of murdered dog walker Toyah Cordingley have played down hopes the prime suspect in her case will ever face trial – as they claim police have been ‘careless’ with vital evidence.

The 24-year-old pharmacy assistant was found battered and bruised with ‘visible violent injuries’ at Wangetti Beach in far north Queensland on the morning of October 21, 2018.

Her body was discovered naked and partially buried in sand dunes by her father almost 12 hours after she was reported missing.

Rajwinder Singh, who fled on a flight to his native India the same day, is a key person of interest but no arrest warrant or Interpol ‘red alert’ has been issued by Australian police.

Indian police have previously said they would be happily search for him – but nobody has officially asked them for help.

Ms Cordingley’s cousin Rachelle Foss said on Tuesday her family still had no answers and all they had been told was Singh was ‘wanted for questioning’.

‘Even if he is found and a warrant for his arrest is released, the likelihood of getting him extradited to Australia will be a very long and drawn out process,’ she said in a social media post.

Ms Foss then went on to criticise the Queensland Police operation for their handling of the operation. 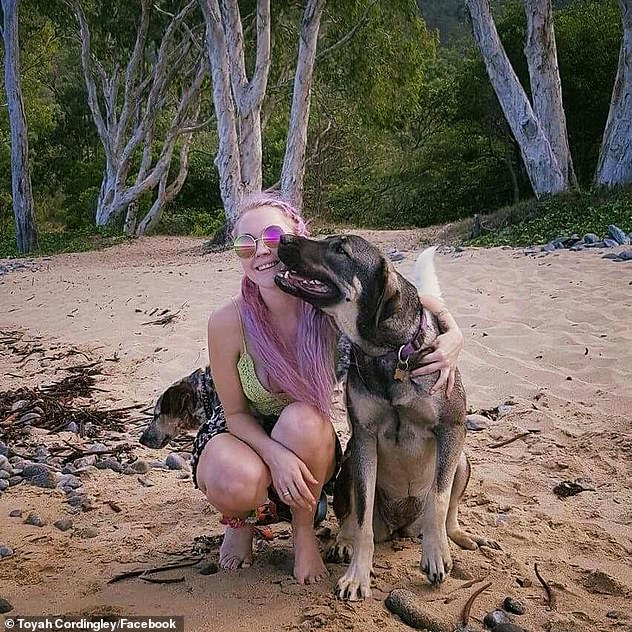 Ms Cordingley’s body was discovered naked and partially buried in sand dunes, while her dog was found tied to a nearby tree 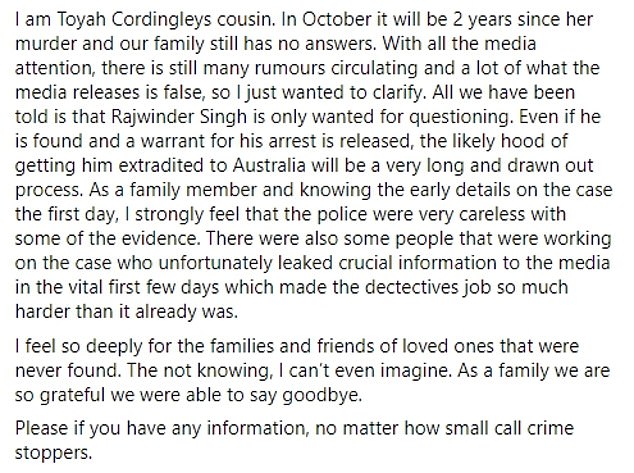 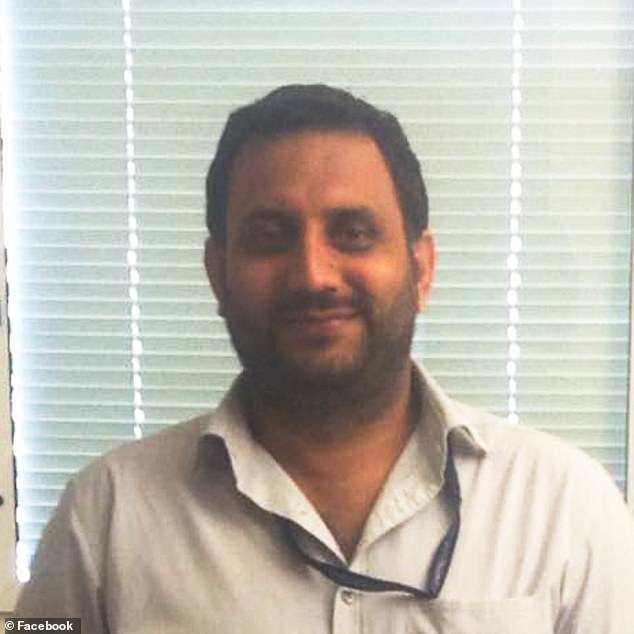 Australian police still haven’t issued an arrest warrant or requested a global Interpol ‘red alert’ for Singh, who fled to India the day after Ms Cordingley’s body was found

‘As a family member and knowing the early details on the case the first day, I strongly feel that the police were very careless with some of the evidence,’ she wrote.

The cousin did not explain how she believed police had bungled the investigation.

Ms Foss also took aim at the media – saying crucial evidence was leaked to the media in the first few days which made detectives jobs ‘so much harder than it already was’.

Queensland Police in December 2018 criticised media reports claiming a key suspect in the 24-year-old’s murder had fled Australia in the wake of her death.

In the weeks after her cousin was murdered, Ms Foss had shared a photograph of the young woman surrounded by sunflowers, alongside a post remembering her ‘pure, free spirited and kind’ family member.

‘I feel so deeply for the families and friends of loved ones that were never found,’ Ms Foss wrote in her latest post.

‘The not knowing, I can’t even imagine. As a family we are so grateful we were able to say goodbye.’ 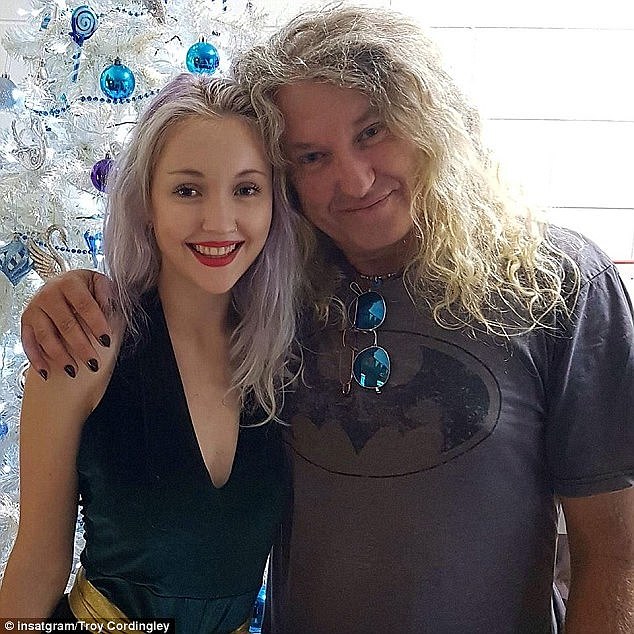 Ms Cordingley was killed while she walked her boyfriend’s dog at Wangetti Beach in Far North Queensland on the morning of October 21, 2018. Pictured with her father Troy

She urged anyone with information on the case to contact Crime Stoppers.

If anyone has information on what happened to Toyah Cordingley police have asked them to call on 131 444.

Authorities cannot arrest Singh – who is living as a free man in India – without an official order, the Courier Mail reports.

Queensland Police have refused to disclose the details of the investigation or comment on why a formal manhunt for Singh hasn’t been commenced.

‘This is a complex ongoing matter in which police are taking an appropriately thorough approach to all aspects of the investigation,’ police said in a statement. 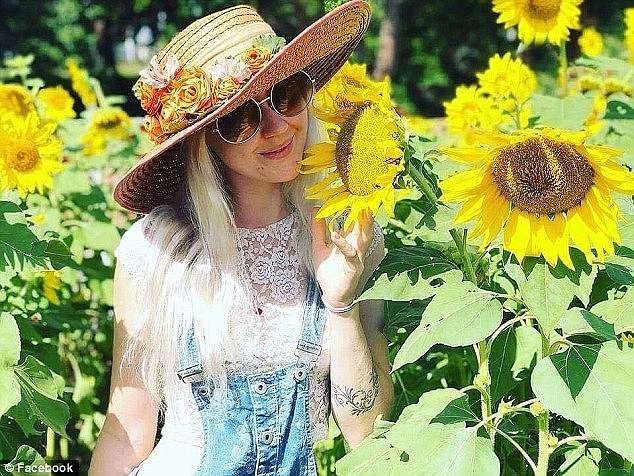 It’s believed Singh nurse quit his full-time nursing job at Innisfail Hospital, abandoned his wife and child and fled to India the day the body was found.

Last year a family spokesman said Singh – who worked as a nurse at Innisfail Hospital – could be hiding out in a Sikh temple.

‘If someone wants to hide, it is easy to hide in India,’ the spokesman said.

‘He could be in any one of thousands of Sikh temples, where he can live under a fake identity and get work, free food and board.’

Singh has extended family living in his home town of Amritsan in Punjab state, near the Pakistani border about 450km north of India’s capital New Delhi.

Late last year, Singh’s uncle told 7News Singh had not been in contact with the family there.

Inspector Harsandeep Singh of Punjab Police said they were here for justice and ready to investigate, but even if they saw Singh, they couldn’t arrest him without any order or request.

‘There is no case against Rajwinder Singh in our police station. He is as clean as you and me. For us right now he is a law-abiding citizen of this country,’ he told the Sunday Mail. 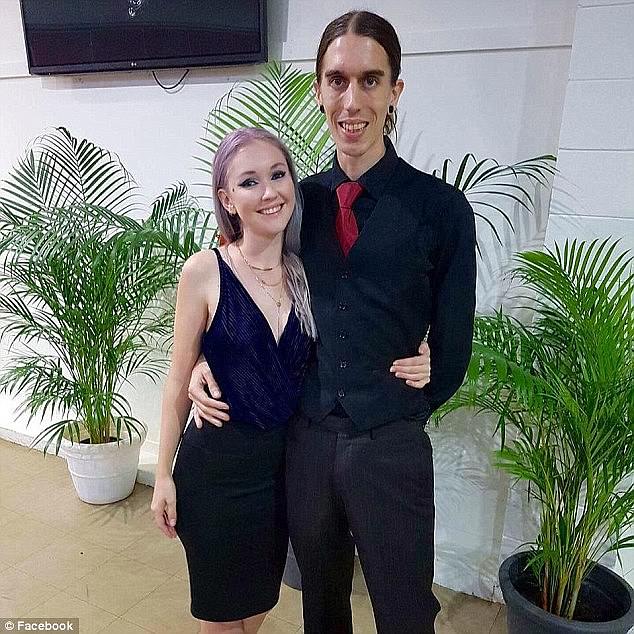 Ms Cordingley is pictured alongside her boyfriend Marco Heidenreich

It’s understood to be extremely difficult to extradite fugitives from India.

Ms Cordingley’s family and friends have vowed never to give up the hunt for justice.

More than 100 people gathered last October to unveil a memorial on the anniversary of her death, not far from the spot where she was killed.

Days later, heartless vandals tore down a banner with Ms Cordingley’s face on it on it.

They also tossed trinkets left at the site by loved ones in a nearby bin. 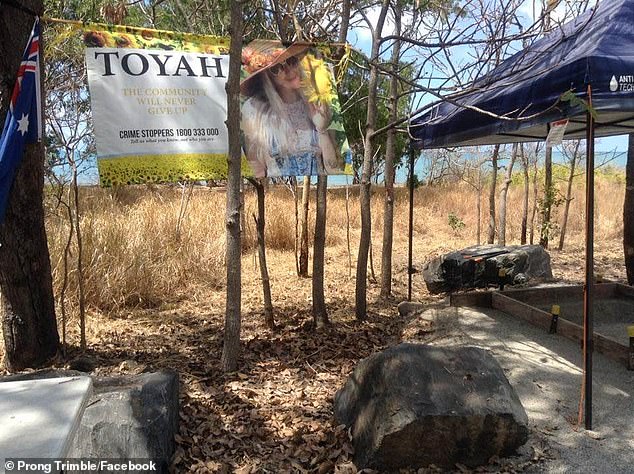 More than 100 people gathered last October to unveil a memorial on the anniversary of her death, not far from the spot where she was killed 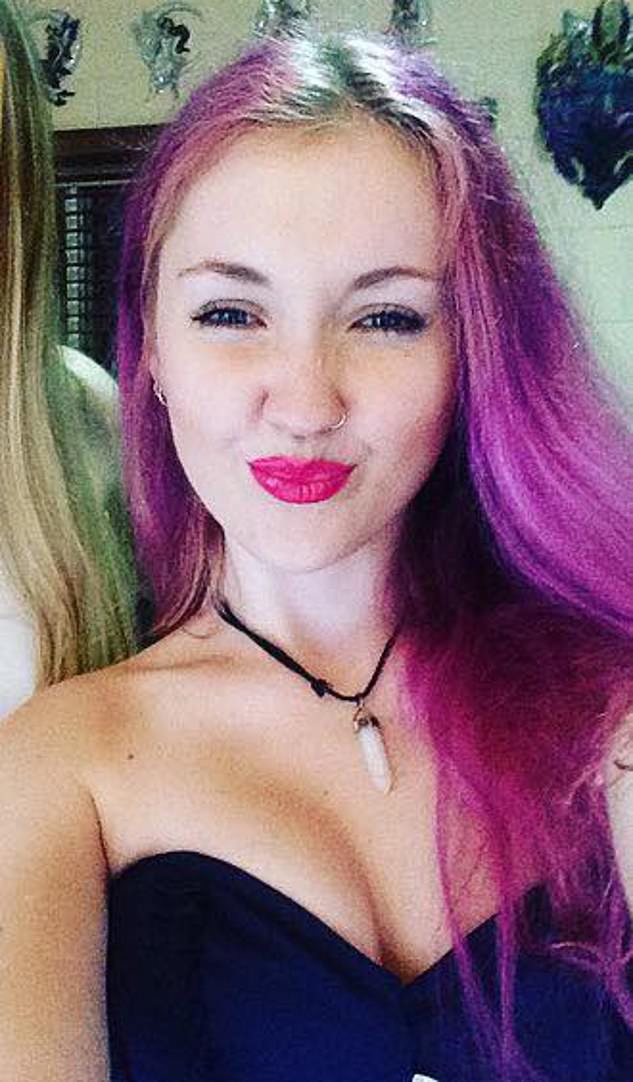 If anyone has information on what happened to Toyah Cordingley (pictured) police have asked them to call on 131 444. You can remain anonymous

Family friend Wayne ‘Prong’ Trimble noticed the banner – which was printed to help catch the killer – was missing.

He pleaded with the culprits to come forward.

‘Does anybody know the lowlifes who stole Toyah’s banner from near her monument in the last couple of days?’ he asked on Facebook.

‘That banner was given to Toyah’s family to hang there. We want it back … Just put it back to save your life if it’s worth saving. I’m pi**ed off.’

Steve Parsonage from the Copy Shop Business Centre printed a new banner to take its place.

He also gave one to her devastated parents, Troy and Vanessa Cordingley.

The site also has a memorial stone and an area for visitors to sit on.