Toys R Us is to shut all 100 of its UK stores after administrators failed to find a buyer for the collapsed retailer – resulting in the loss of 3,000 jobs.

The chain was plunged into liquidation in January after failing to pay a £15million VAT bill and it put jobs across the country at risk.

It appointed Moorfields Advisory to oversee an administration at the end of February after the firm failed to find a last-minute rescuer.

But on Wednesday, staff were told that no buyer has been found for the retailer and added that all of its British stores will close.

Toys R Us in Oldbury, West Midlands is still open although the staff do not know when it will close 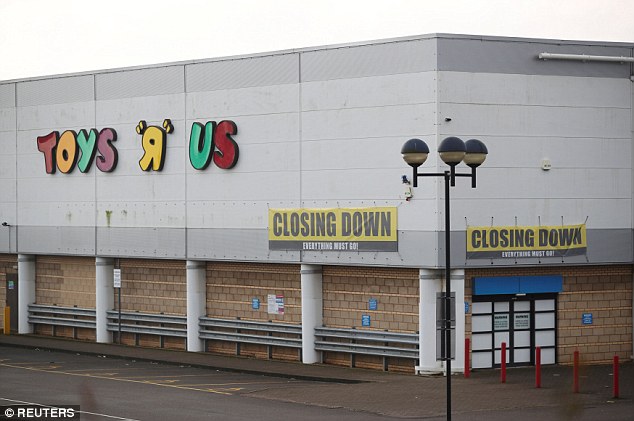 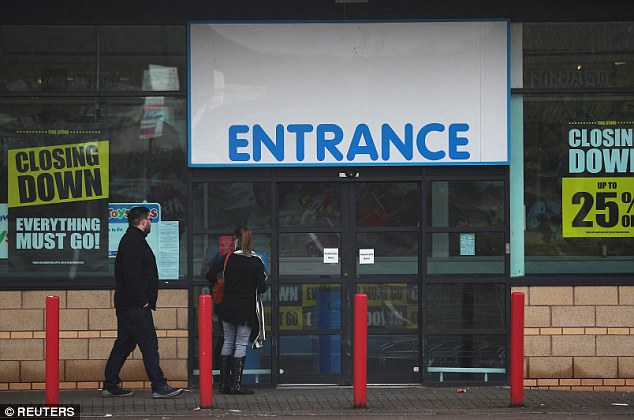 A total of 67 staff at the company’s head office in Maidenhead have now been made redundant and 25 stores have either closed in recent days or are due to close by Thursday.

These stores had been earmarked for closure as part of a restructuring before its demise and Moorfields will now begin a six-week ‘wind down’ of the remaining estate.

Simon Thomas, joint administrator and partner at Moorfields, said: ‘We have made every effort to secure a buyer for all or part of the company’s business.

‘This process attracted some interest, but ultimately no party has been able to move forward with a formal bid prior to the expiration of the stated deadline.

‘It is therefore with great regret that we have made the difficult decision to make a number of positions redundant at the company’s head office in Maidenhead and proceed with a controlled store closure programme.’

Fans of the store were distraught this afternoon after learning it would be shutting all of its stores.

Many took to social media to relive their childhood memories and one person created a poignant GIF showing Geoffrey the giraffe looking out into the sunset with a child.

Hundreds also took to Twitter to voice their disappointment and devastation with many commenting on how the store was ‘the most exciting place’ as a child.

One Twitter user wrote on Wednesday afternoon: ‘I never thought I would be alive to see Toys R Us close :(‘

Another added: ‘Toys R Us was THE most exciting place as a kid. I doubt ‘pick something from Amazon’ is the same for kids today.’

A woman said: ‘So sad that my future kids won’t get to experience the magic of Toys R Us like I did.’

It is believed that Moorfields will now begin a six week ‘wind down’ of the store estate.

Moorfields said at the time of the chain’s collapse that it is making ‘every effort’ to secure a buyer for all or part of the business.

However, it added that no suitor materialised in what is proving to be a dire time for high street retailers. 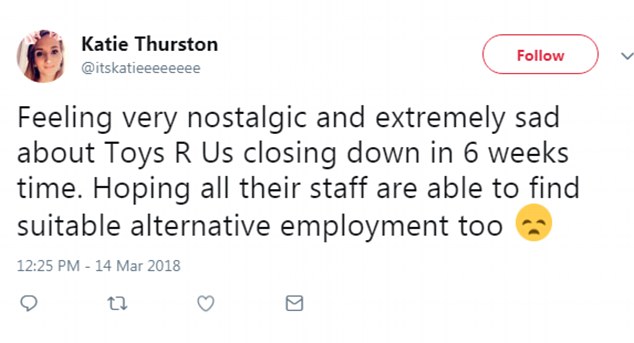 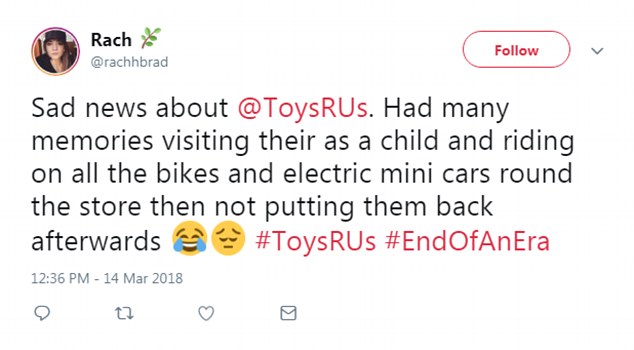 Professor Heiner Evanschitzky, co-director of Aston Centre for Retail Insights based at Aston Business School, said: ‘A key problem for Toys R Us was a lack of clear focus: is it a big box discount store for toys, a store with a vast assortment of toys, a leader in quality and service?

‘They missed an opportunity to reposition themselves as an inspirational place to shop at. Consumers rightly asked why they should bother going there instead of buying online.’

The retail sector has had a dismal start to 2018, with the collapse of Toys R Us and Maplin and a host of firms undergoing painful restructurings, including New Look and eateries run by celebrity chef Jamie Oliver, as well as Byron and Prezzo.

High street chains across the board have been hit hard by falling consumer spending, soaring Brexit-fuelled inflation and competition from online rivals.

Mr Thomas added: ‘All of the remaining 75 Toys R Us and Babies R Us stores will remain open until further notice.

‘We’re extending the nationwide discounting programme and would like to encourage customers to take advantage of the special offers available in store while stock levels remain high.’ Closing down signs are seen outside the Toys R Us store in Coventry and around 3,000 staff members will lose their jobs 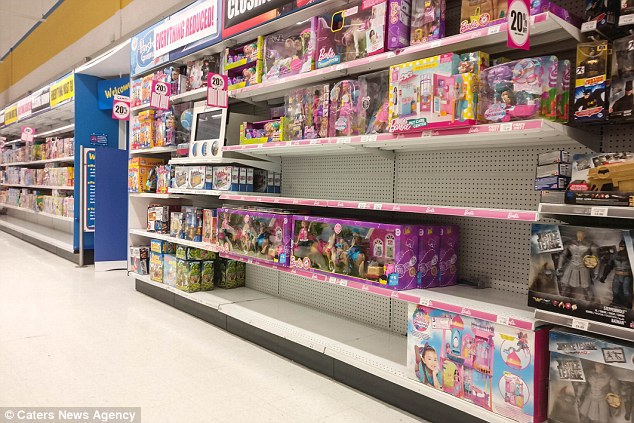 The Toys R Us store in Oldbury, West Midlands, has various empty shelves and discounts up to 25 per cent, with Barbies a clear favourite with buyers

Hannah Maundrell, Editor in Chief of money.co.uk, told MailOnline: ‘The waiting game could be over for Toys ‘R’ Us staff as all of their stores are now expected to close within the next six weeks after finally filing for administration last month.

‘It’s a sad end to an era, but not surprising news because we know they’ve have been struggling to find a buyer.

‘It’s distressing news for employees of Toys ‘R’ Us and their families, especially because their fates have been uncertain for so long.

‘Now is the time to check what redundancy rights you have and dig out any income or mortgage protection policies you hold.

‘Unfortunately Toys ‘R’ Us aren’t the only retailer who have been struggling recently, so anyone who is worried about the future of their jobs should hope for the best but prepare for the worst.

‘The deadline has now passed to use gift cards in store and online so these are now unlikely to be accepted.

‘Toys ‘R’ Us have said all orders received prior to them going into administration will be fulfilled or refunded.

‘If you are still waiting for your delivery today (14th March) then you need to log your order as missing. Toys ‘R’ Us are no longer accepting items for exchange or refunds.’