Imagine having a condition where you perform sexual acts and have no control over or awareness of what you’re doing, and very little memory of it afterwards.

That’s what it’s like to have sexsomnia, a condition that causes people to engage in sexual activity in their sleep, but aren’t aware of it.

Not surprisingly, it causes both embarrassment and distress for those who experience it, and their partners. It’s not hard to imagine the kind of serious difficulties it can create when it comes to issues surrounding consent.

‘You sure this is real and not just a great excuse to rape someone without being blamed?’ was one response to my query on social media asking any sufferers to tell me their experiences.

It quickly became clear how suspicious people are of the condition – and no-one’s arguing the possibility for exploitation. A medical diagnosis of sexsomnia has been used as a criminal defence in court for alleged sexual assault and rape cases. Albeit rarely.

But studies and research prove the condition does exist, and it might be more prevalent than statistics suggest because people are too embarrassed to admit it.

Here, a man who is a sexsomniac and his partner tell me what it’s like to live with the condition.

Tracey Cox explains that sexsomnia is a condition that causes people to engage in sexual activity in their sleep, but they aren’t aware of it. Stock image

I’ve been a sexsomniac since my 20s

Dave*, 39, has been with his current partner for 13 years

‘It happens more frequently with my long-term partner probably because she doesn’t stop me or push me off. My other exes were like, “Get off me, I’m asleep!” but she likes sex and is up for it. She knows when it’s happening: she says I’m very different in sexsomnia mode. Like an animal. That I don’t have any thought of “what I’m doing or would she be OK with this?” The rest of the time I am very respectful when I have sex with her. 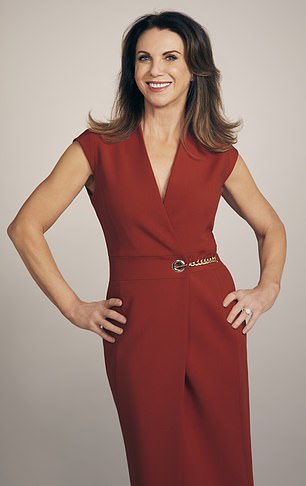 Sex and relationship expert Tracey Cox, pictured, speaks to one couple living with Sexomnia and how the condition affects their lives

‘Most of the time, I’ve either woken up during or had some memory or recollection of the episode. But other times there’s no memory at all. I’ll wake up and go about my day and then my partner will message and say, “Do you remember about last night?”. And I don’t.

‘When I was a kid, I used to sleep walk and talk a bit, I think it’s under the same umbrella. My trigger seems to be anxiety. It happened when I first moved to London and didn’t have a job. It happened when I was going to be a parent and worried about money. It peaks when I feel stressed and anxious. I haven’t felt like that for a while, so I’ve been OK.

‘I know some people don’t think it’s real but it’s 100 per cent real. It’s not an excuse to do whatever in my sleep: you don’t just make up this condition.

‘Because my partner embraces it, I don’t feel guilty. But it does feel weird and scary sometimes. My Dad and Mum sometimes stay with us in London and we have no spare room so my Dad sometimes sleeps with me.

‘He said one night he woke up and I was leaning over him. My parents know about it, but it still didn’t stop me feeling mortified – leaning over and not realising it was my mum or dad in the bed, that scared me. I’m not aware in that moment who’s there and that’s the part that’s frightening. I need to be so careful of who I’m lying next to.’

I enjoy the ‘sleep sex’ – it’s intense and exciting

Susannah*, 47, is Dave’s partner. They have one child together 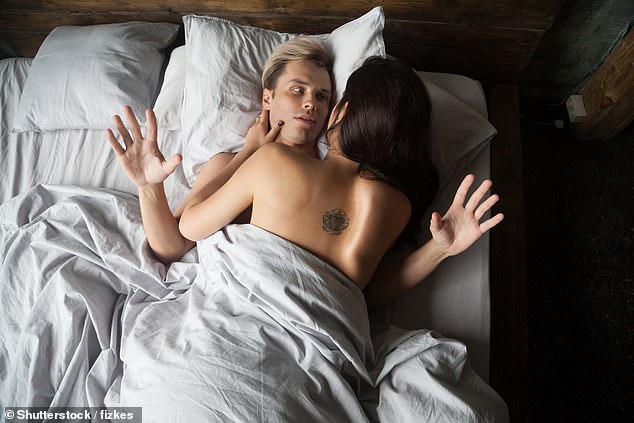 When a person has sexomnia, they might have sex in the night without realising or remembering. Stock image

‘It happened a few more times and I started to see a pattern. It was usually around 2am. I kind of liked it and was intrigued and it was at the start of the relationship when things were quite rocky. I never said stop when it happened, even when he hurt me once by thrusting too hard into my mouth. I don’t know why I didn’t stay stop. I think I liked the rawness of it. I’d also read that you weren’t supposed to wake up people if they were sleepwalking and wondered if the same applied here.

‘I remember the moment I realised what was going on. We were watching House, the TV show about the medic who solves problems. The doctor diagnosed a patient as a sexsomniac. I remember looking at him and saying, “So that’s what’s going on!”.

‘The sex is so intense when he’s having an episode. It’s like having two men in one. He never makes love like that usually. Actually, it’s not making love – it’s nothing like that. It’s wild and he’s so strong as well. It’s like he’s on some sort of drug. It’s exciting – the intensity, the adrenaline. I used to keep lube handy, I was never going to turn him away. Now I would if I needed to, but back then I didn’t want to. I was intrigued. I would open my legs, put some lube in and enjoy it.

‘There is no doubt this is a real condition. Once, we were on holiday and he had to share a bed with his Mum. She said he tried to climb on top of her in the middle of the night. His parents know about his sexsomnia – we all make a bit of a joke about it – so she handled it well and pushed him off and was very understanding about it all.

‘Another time, he had to share a bed with his Dad and did the same thing. His Dad was totally spooked out and came out of the room immediately and slept on the sofa. Things like that upset him but he’s been living with it all this time, so I guess he’s used to it.

‘I think it’s a calming thing for him. I think he masturbates when he’s stressed during the day as a way of releasing tension. Maybe his brain decides that’s a good thing to do while he’s asleep as well, if he’s feeling anxious.

‘There’s another reason why I don’t mind his sexsomnia. Both times I’ve been pregnant, it’s been after an episode.

‘We have a seven-year-old child now because of it. We’d tried everything to get pregnant and it was only sleep sex that worked. Since then, it’s happened far less. I think he’s a lot calmer now.’

THE FACTS ABOUT SEXSOMNIA

Sexsomnia is a rare type of parasomnia (sleep disorder) in which a sleeping person engages in sexual activities.

The sexsomniac is unaware of and unable to control their actions with bouts of sexual activity tending to start abruptly and lasting less than half an hour.

How do you know they’re not awake and pretending?

One of the most confusing things for people interacting with a sexsomniac is that their eyes are often open… even though they’re still asleep. Their look is described as ‘vacant’ or ‘glassy’ with a ‘faraway look’.

Another tell-tale sign it’s genuine is the person is either completely or minimally responsive to what’s happening or any attempt at conversation.

Another giveaway: their sexual advances are unusual for the person and often unusually aggressive. They’re selfish: focused on their own enjoyment not their partners. The person seems lust-driven and less inhibited than they are when having sex awake.

It’s extremely difficult or impossible for their partners to wake them up at the time. Once they do wake to full consciousness, usually the next morning, there’s often no memory of what’s happened.

How many people have it?

Case reports of sexsomnia are few and far between.

Not just because it’s rare but because people who suffer from it are often too ashamed to own up to it.

A study in 2017 highlights just how rare it is in the general population: of 16,000 patients being treated at a sleep clinic, only 17 cases of sexsomnia were found.

There’s no one cause – but there are factors that appear to trigger it.

Lack of sleep, high anxiety and stress and being over tired all appear to be linked to the condition. Drinking, drug use, things that disrupt sleep (like shift work) and depression can also be triggers.

It’s also likely to be at least partly hereditary.

How do you know if you’ve got it?

Most don’t remember anything they did or said during the night and it often takes hard evidence – like a partner taking a video – before they’re convinced it happened.

What about the issue of consent?

It’s a given that a sexsomniac must make sure any person who shares a bed with them is informed and able to control their advances.

Having ‘sleep sex’ sounds like fun for the person instigating it but it’s often not. Imagine being unaware and not in control of what you do while asleep – and waking up to find you did things you’d never do in real life to someone you’d never normally interact sexually with.

If it could cause problems – the sex isn’t wanted or you’re worried you might initiate sex with someone you don’t want to – experts highly recommend sleeping in another room, preferably one with a lock that’s difficult to undo easily. Alternatively, your partner can sleep separately and lock their door from the inside.

What if I think I have it?

You can’t cure sexsomnia but it is manageable.

If you think you have it, visit your GP and ask for a referral to a physician who is a sleep specialist.

There is medication that can help but it’s more likely you’ll be advised to manage your triggers.

These vary person to person but reducing stress and developing good sleep habits all help to keep it under control.