Border Force officials are only aiming to spot check fewer than a third of arrivals at Britain’s airports, it has been revealed.

The government has introduced measures which require passengers arriving in the UK to fill out an online form before they arrive in the UK from any country.

This includes countries or territories which are not on the list for mandated self-isolation and guidelines state the form must be completed within 48 hours of arriving back in the UK.

But a target of just 30 per cent has been set for agents checking passenger paperwork on their arrival into the country, a source told the Guardian.

It comes as a second wave continues to surge across Europe, with Portugal becoming the latest country to report a rise in coronavirus cases, sparking fears it may be added to the government’s quarantine list.

Passengers arrive at Heathrow Airport in London, as it’s revealed Border Force only check up to 30 per cent of passengers’ locator forms on their return into the country

Passengers entering the UK from a number of countries, including France and the Netherlands, are expected to self-isolate and the government uses data from completed online forms to ensure this is being done correctly.

However, sources stated that of the 30 per cent spot-checked by Border Force, 10 per cent had not completed forms.

Border Force officers are expected to manually scan a QR code at the top of the passenger’s document to check it has been completed successfully when they arrive in the country.

This is also to ensure the government can contact passengers if someone they’ve travelled with develops coronavirus symptoms.

While Home Office figures show 1.3 million passengers arrived in the UK by air in July, only three fixed-penalty notices were handed out to people who failed to self-isolate after arriving in England and Wales between 15 June and 17 August, according to figures published by the National Police Chiefs’ Council on Thursday. 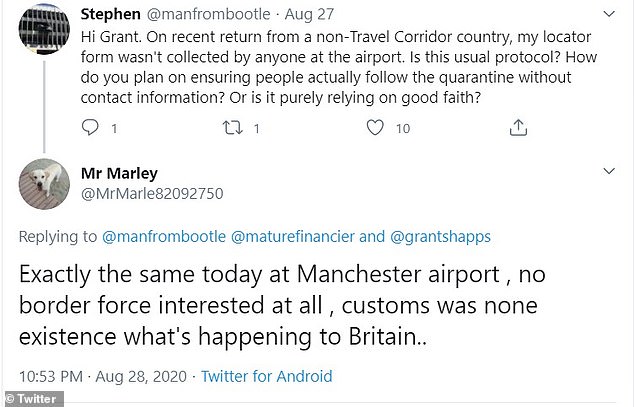 Hungary to close its borders to foreign visitors from Tuesday

Hungary will close its borders to foreign visitors from Tuesday in a bid to curb the increasing number of coronavirus cases, the government has said.

From September 1, foreigners will no longer be allowed to enter the territory of Hungary,’ Gergely Gulyás, the prime minister Viktor Orbán’s cabinet chief said during a press briefing, according to Euronews.

He added: ‘There is a risk of introducing the virus and most of the new infections are of foreign origin. Hungary is green, all other countries are now turning red.’

Hungarian citizens returning from abroad must quarantine for 14 days or must present two negative tests, which they must pay for themselves.

Hungary’s government indicated that the border closure will stay in place for a month.

People have taken to social media to raise concerns about the lack of checks at airports across the UK.

Mark Hart wrote: ‘Friends just arrived at Gatwick from Croatia – yep no control just straight through with no need to provide an address for their self-isolation.

‘Govt not serious about this at all. Surprised?? Given track record not a bit. Total joke.’

Phillip Kerle added: ‘I had the same experience coming back from Bulgaria about three weeks ago.

‘My temperature was checked before going into Sofia airport. I got off the plane at Stanstad walked out. No announcements, no requests to complete a form. Nothing.’

George Beckwith tweeted: ‘Arrived at Stansted Airport Saturday morning – No Physical Border control,No Covid checking, no Locator forms checked, no Customs check, no Staff/Officers around …. I just entered UK with only electronic passport check. This Country is out of control.’

Another user tweeted Grant Shapps, Secretary of State for Transport, asking: ‘On recent return from a non Travel Corridor country, my locator form wasn’t collected by anyone at the airport.

‘Is this usual protocol? How do you plan on ensuring people actually follow the quarantine without contact information? Or is it purely relying on good faith?’

The concerns over quarantine checks come as Portugal becomes the latest country to spark fears over holiday restrictions as it experienced a surge in coronavirus cases. 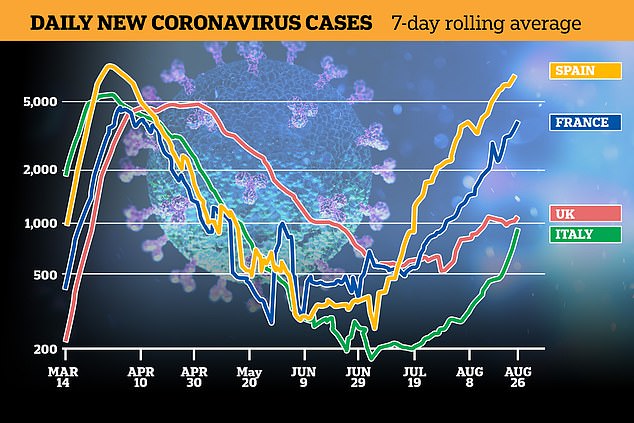 Spain, France and Italy are all seeing surges in the number of coronavirus cases, as a second wave of infection takes hold across Europe

A British groom getting married in Prague on Saturday has said almost 30 of his friends and family have had to leave before the wedding due to new travel restrictions.

Oliver, who did not wish to share his second name, is originally from Kent but has lived in the Czech Republic for 11 years.

Many of his family and friends have had to leave before the wedding takes place as they cannot quarantine when they return because of work constraints.

Travellers arriving in the UK from the Czech Republic after 4am on Saturday will need to quarantine for 14 days, in a rule change announced late on Thursday night.

Figures published yesterday showed the country recorded 399 new cases, an increase of more than a third on the previous Friday.

The UK government warns that any country sustaining a level above 20 new coronavirus cases per 100,000 citizens over the course of a week is likely to be stripped of quarantine exemption.

Portugal was only added to the UK’s low-risk list last Saturday but has now seen it’s highest daily total since July 12.

Most recently, the Czech Republic, Jamaica and Switzerland were added to the list of countries deemed to high-risk to travel to without quarantining on return.

The Department of Transport has said that anyone returning from these countries as of today must self-isolate for two weeks.

Across Europe, countries including France, Spain and Italy continue to see increases in the number of coronavirus cases.

Meanwhile Italy, which had some of the lowest case totals in Europe after reopening its economy, registered 1,367 cases – its largest rise since May.

Spain registered another 7,296 cases, enough to push the country above the US – the world’s worst-affected nation – in number of cases per million inhabitants, based on a seven-day rolling average.