An awkward interaction between Tracy Grimshaw and her rumoured A Current Affair replacement Allison Langdon has been caught on camera.

Grimshaw wrapped up her 17-year run as host on the show on Thursday night and and was sent off with applause, hugs and well wishes from her Channel Nine colleagues as she walked out of the ACA studio for the very last time.

Footage of her farewell at the Nine studios shows Grimshaw walking through a guard of honour and when Langdon goes to hug her, she appears to reject the embrace.

After hugging several staff members, including Karl Stefanovic and Peter Overton, Grimshaw walked by Langdon who had her arms outstretched for an embrace.

But Grimshaw brutally brushed her, appearing to shake her head before hugging Stefanovic.

Speaking on the Today show this morning, Langdon addressed the awkward moment admitting that she ‘didn’t get much sleep’ after the incident.

‘That’s where my heart breaks,’ Langdon said while watching the clip.

Footage shows Grimshaw walking through a ‘guard of honour’ and when Langdon went to hug her, she appeared to reject the embrace

Grimshaw brutally brushed her, appearing to shake her head 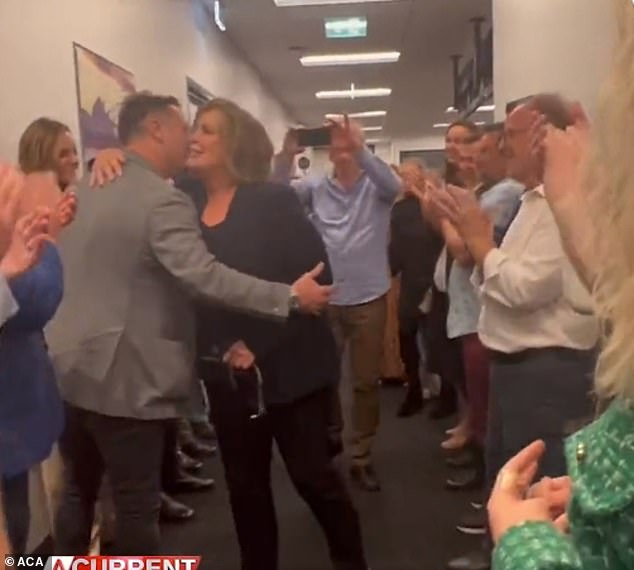 She then hugged Karl Stefanovic, who stood beside Langdon

‘I’m devastated. I mean, I turned to you at the time going “Tracy Grimshaw just brushed me.” When you get brushed by your hero, I gotta say it hurts.’

Stefanovic then revealed that Grimshaw had written a statement and apologised for snubbing her at the walkout.

‘Ally, I just watched the guard of honor from last night and I saw you went in to give me a hug,’ Grimshaw said.

‘And I hugged bloody Karl! I’m sorry I missed you. I was so overwhelmed and obviously didn’t see your petite head once his big boofhead loomed into vision. Big sorry.’ 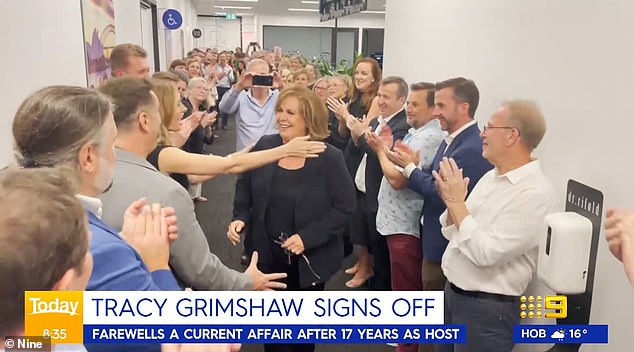 Speaking on the Today show this morning, Langdon addressed the awkward moment admitting that she ‘didn’t get much sleep’ after the incident 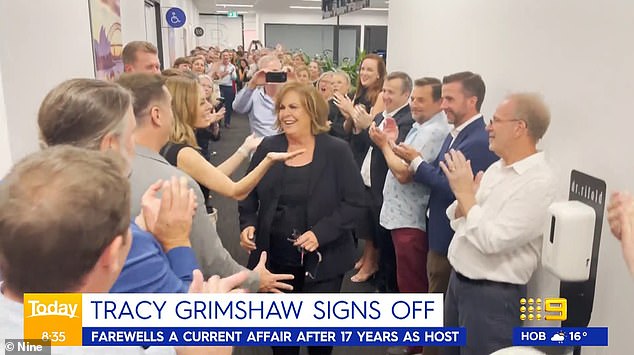 ‘I’m devastated. I mean, I turned to you at the time going “Tracy Grimshaw just brushed me.” When you get brushed by your hero, I gotta say it hurts,’ she said

‘Ah, relief!’ Stefanovic sighed, dubbing the moment one of the ‘greatest snubs on Australian television’.

Langdon is highly-tipped to replace Grimshaw as host of the show and an announcement is expected to be made by Nine next week.

Kyle Sandilands appeared to confirm that Langdon is replacing Grimshaw during an interview with the long-running host on Wednesday.

Speaking to Grimshaw on his KIIS FM radio show, the shock jock said he knew it was the Today show host.

Kyle claimed he’d had a private conversation with Langdon’s Today show co-host Karl Stefanovic, who has been asking him for advice on a potential replacement for her.

‘I feel like I know, because I’ve been speaking to [Karl] Stefanovic,’ he told Grimshaw after grilling her on the topic of her replacement.

‘Well, let me just tell everyone it is Ally. I don’t mean to bust Channel Nine’s bubble.’

Sandilands said Stefanovic didn’t tell him their chat was ‘confidential’.

‘Maybe that was a personal chat? I don’t know… But he didn’t ask me not to say anything,’ he continued.

Grimshaw remained coy when pressed on the rumours as to who will be her replacement, saying every candidate for the job is ‘an exemplary person’.

Grimshaw was sent off with applause, hugs and well wishes from her Channel Nine colleagues

‘I certainly hope Channel Nine would replace me with a dud,’ she joked.

‘But unfortunately they do replace me with someone excellent.’

‘I can’t possibly give you a hint, but you’ll know very soon,’ she added. ‘I wouldn’t be surprised if you know next week.’

During her final show, a teary Grimshaw thanked Australians for supporting A Current Affair as a slew of famous faces farewelled the long-time host after 17 years on the show.

The TV veteran was honoured by celebrities and ordinary Aussies who her show has helped over the years, with her replacement yet to be announced.

The presenter, who has interviewed the likes of Oprah, Ellen Degeneres, Celine Dion and Sharon Stone in her 40-year career, was handed a bouquet of flowers as she told viewers they would ‘soon’ find out who would take her place.

‘I’m terrible at the GB word, you know, the one that ends in ‘bye’ and starts in ‘good’ because I’ll blub and you all know that won’t be pretty,’ Grimshaw said.

‘But, seriously when I started here, my bosses at the time said they didn’t like interviews that ran longer than four minutes because you’d be bored.

‘And now look at us. The entire show can run interviews like that because you’ve told us you love them. Thank you for watching them.’

Grimshaw paid tribute to the entire Channel Nine team and gave a special shout-out to ‘Daria’ who she said has done her auto-cue since the Today Show.

A series of high-profile Aussies paid tribute to Grimshaw, with her colleagues praising her journalistic skill and ability to connect with everyday Australians.

Mr Albanese asked if Australian television would ever be the same again, while Kyle Sandilands applauded Grimshaw for always putting her guests at ease.

During her final episode, Grimshaw spoke with flood victims in Eugowra in NSW’s central-west town who received a $50,000 donation from Coles live on-air.

The show took a trip down memory lane, returning to some of Grimshaw’s most notable interviews, including Sue and Lloyd Clarke – the parents of domestic violence victim Hannah Clarke – the Irwin family and Olivia Newton John.

In September, the veteran presenter announced she was quitting A Current Affair, later revealing she planned to take a year off to amend her work-life balance.