A group of concreters have stolen toilet paper from a woman who stashed thousands of rolls behind her suburban home.

The trio filmed themselves picking up 48-packs of toilet paper from a mountain of the product piled high outside the home in Macquarie Fields in Sydney’s south west.

Both the homeowner and the tradesmen could be heard threatening to call the police on each other as the group mocked her and carried the packs to their ute parked on a road nearby.

The bizarre scene comes as Coles and Woolworths re-institute purchase limits on toilet paper amid a second wave of COVID-19 infections in Victoria.

‘We’re going to call the police on you – too much f***ing toilet paper,’ one of the tradesmen says when the woman threatens to notify authorities.

‘Boys bring your truck and dogs – this stupid b***h is taking everything off the shelves and hiding it in her garage.’

Daily Mail Australia understands the owner of the stockpile runs a shop on a street in the area.

The group appear to try and sell the goods to passers-by for $5, before the concreter filming the bizarre scene launched into an angry tirade against the woman’s stockpiling behaviour.

‘Do you know what you’ve done to Australia?’ he asks the woman.

‘You guys have no work to do?’ she responds, before the voice behind the camera says ‘we’ve got plenty of work to do looking at you’.

A New South Wales Police spokeswoman said the force had not received any complaints relating to the video, which was shared online via Facebook Live two weeks ago.

Social media users had split opinions on the dispute, with some taking sides with the homeowner. 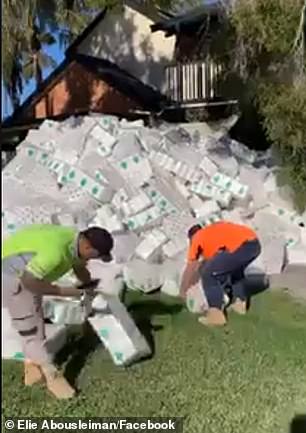 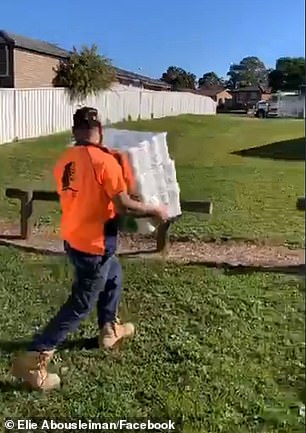 ‘There is no context to this this video. She could be a shop owner and they are stealing from her,’ one person wrote on Facebook.

‘And if she did hoard them then she did so months ago and you can now get toilet paper like normal at the shops again.’

Others though thought the tradesmen were in the right given the context of the COVID-19 pandemic.

‘People are actually starting to hoard toilet paper again. People like this make it hard for other families – they should be ashamed,’ another wrote.

Sydneysiders this week have again started to flock to supermarkets to stock up on toilet paper – three months after panic buying first crippled the nation. 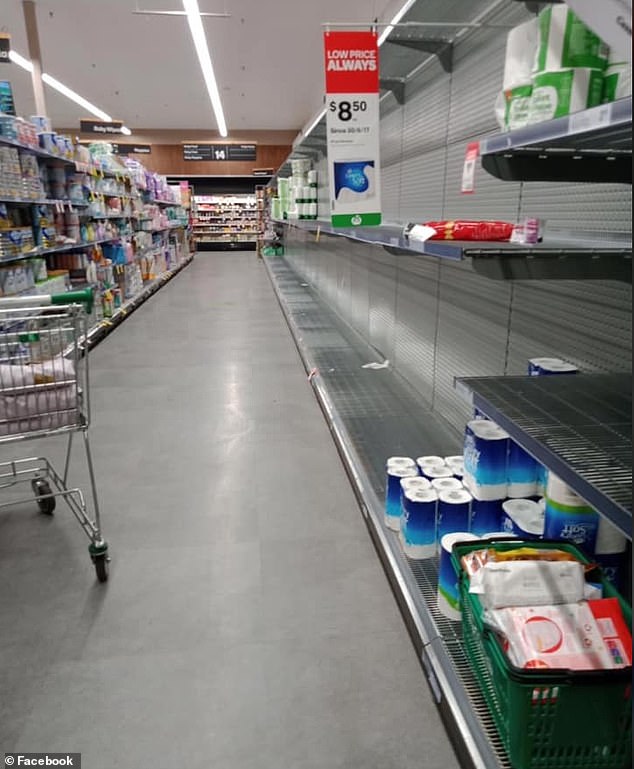 NSW supermarkets have started to again experience shortages in their supply of toilet paper amid a spike in COVID-19 cases in Victoria. Pictured: Empty shelves at Woolworths in Green Hills

Shoppers complained on social media on Friday that toilet paper was in short supply at Coles supermarkets in Leichhardt, Merrylands and Roselands in Sydney on Thursday.

All Coles and Coles Express stores across the country now limit toilet paper and paper towel purchases to just one pack.

In addition, Victorian stores and those along the NSW border have two-item limits on hand sanitiser, flour, sugar, pasta, mince, UHT milk, eggs and rice. 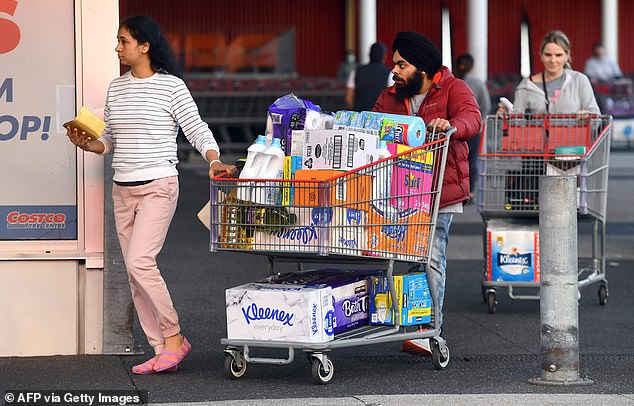 Shoppers leave Costco after stocking up on essentials. Costco, which has stores in Sydney, Melbourne, Brisbane, Canberra, Perth and Adelaide, is limiting customers to one pack of toilet paper each

Three Coles stores in Lavington, Albury and Deniliquin in NSW are affected since they rely on Victorian distribution centres.

A Woolworths spokesman said the company had reimposed a two item limit on a number of essential items across its Victorian stores on Wednesday afternoon.

Victoria has had 176 new cases of COVID-19 in the past seven days, with the local government areas of Brimbank, Casey, Cardinia, Darebin, Hume and Moreland identified as virus hotspots.