On August 12, 2015, a series of explosions killed approximately 173 people and injured hundreds of others at a container storage station in the city’s port.

Responders to initial reports of a fire at the site were not able to bring the blaze under control because, unknown to the firefighters, vast amounts of sodium cyanide and other chemicals which react with water were being stored at the site.

There were two initial explosions within 30 seconds of each other at the facility, the second of which was far larger because it was the result of 800 tonnes of ammonium nitrate exploding.

Fires at the site, which released tonnes of harmful substances into the air, were left uncontrolled due to the sheer scale of the explosion.

On August 12, 2015, a series of explosions killed approximately 173 people and injured hundreds of others at a container storage station in the city’s port

During a restart of equipment on July 3, 2017, following a 10-day shutdown for Eid, Multifabs Limited confirmed that there garments factory boiler exploded, collapsing a section of its multi-story factory in the district of Gazipur on the outskirts of Dhaka.

Worringly, the company was quoted as saying some 50 people were inside the building while the six-year-old boiler was having maintenance work done to it.

Over the next 24 hours, rescuers found seven bodies in rubble, and three other victims died in hospital. The death toll would remained at 10.

‘I heard a big bang when I was having tea outside,’ factory driver Hafiz Mostafa said, as dozens thronged the factory site and firefighters moved rubble in search of missing persons. ‘I saw windows, doors, glasses, machinery and a section of the wall of the building go flying.’

‘The boiler was running well,’ Mahiuddin Faruqui, Multifab’s chairman told Reuters at the time. ‘After servicing when workers were trying to restart it, it went off.’

In one of the worst defence industry disasters this century, 13 people, including the head of the Cypriot navy, a navy base commander and six firefighters were killed by a blast at a munitions dump which knocked out the island’s biggest power station.

Firefighters were called to the Evangelos Florakis navy base on the south coast of the island on 11 July, 2011, to tackle a blaze at the dump, which burned for about an hour before causing the explosion.

The blast almost levelled the nearby Vassilikos power plant, which produces nearly 60 percent of the island’s energy, damaged buildings in nearby villages and rained metal on a motorway. All the victims were Cypriots.

The country’s defense minister and army chief quit hours after the explosion at the dump, which held confiscated Iranian armaments. A government spokesman ruled out sabotage.

The blast wounded 62 people, shredded the outer walls of two multi-storey buildings and shook olive groves and farming villages for miles around the base.

‘My tractor jumped about half a meter in the air,’ said farmer Nicos Aspros, who was tilling his field at the time of the blast. ‘There isn’t a house in the community which hasn’t been damaged.’ 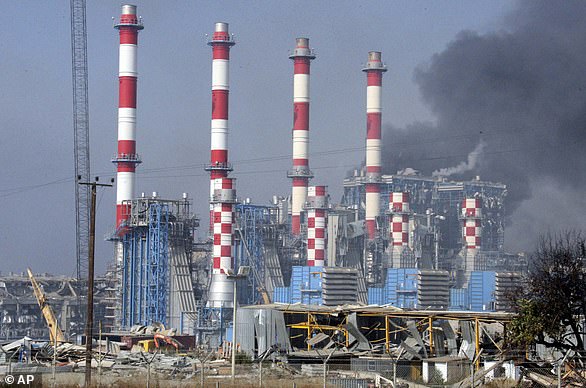 Firefighters were called to the Evangelos Florakis navy base on the south coast of the island on 11 July, 2011, to tackle a blaze at the dump, which burned for about an hour before causing the explosion

The armoury explosion was the result of an accidental detonation of a large stock of military high explosives at a storage facility in the Nigerian capital on 27 January 2002.

The fires created by the debris from this explosion burnt down a large section of Northern Lagos, and created a panic that spread to other areas.

Also thrown up by the blast were thousands of as yet unexploded military munitions, which fell in a rain of exploding shells, grenades and bullets casting further destruction across most of the northern section of the city.

As people fled the flames, many stumbled into a concealed Ejigbo canal and drowned.

The explosion and its aftermath are believed to have killed at least 1,100 people and displaced over 20,000, with many thousands injured or homeless.

The government of Nigeria launched an enquiry, which blamed the for failing to properly maintain the base, or to decommission it when instructed to do so in 2001.

The city of Enschede was built up around the SE Fireworks depot, the only one in the Netherlands to be located in a residential area.

On 13 May, 2000, firefighters were tackling a small fire at the warehouse when the explosion ripped through the building sending debris and fireworks into the air.

Unaware of the oncoming disaster, locals had been watching the firefighters tackle the blaze – and at least one was filming the fire – when the factory exploded.

A total of 400 homes were destroyed and 1500 buildings damaged. The blasts killed 23 people including four firefighters, and injured nearly 1,000 people.

One week prior to the explosion, SE had been audited. The company was judged to have met all official safety regulations while the legally imported fireworks had been inspected by Dutch authorities and deemed safe.

Dutch firefighters continued to work in harsh conditions, and with the help of German firefighters from a town a short distance over the border, the blaze was put out by the end of the day. 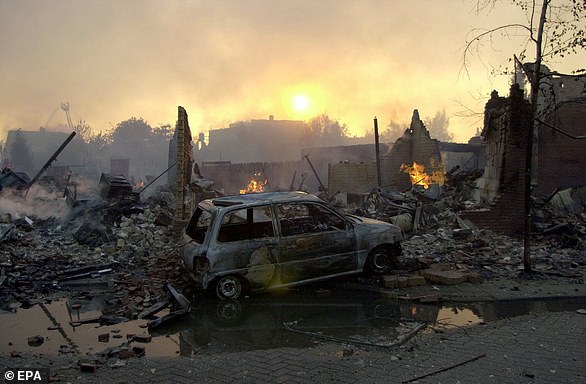 On 13 May, 2000, firefighters were tackling a small fire at the warehouse when the explosion ripped through the building sending debris and fireworks into the air