As Westminster put the brakes on the Scottish Parliament’s plans for gender self identification, opponents of the bill have remembered an icon of their movement who inspired thousands of women to rise up.

Magdalen Berns was a co-founder of For Women Scotland – the group which led an attempted Judicial Review to challenge Nicola Sturgeon’s Gender Recognition Reform Bill and which protested for days outside Holyrood while the bill was debated.

She was also an influential Youtuber, whose ‘incisive’ logic and deadpan delivery earned her enemies from the trans lobby and admirers from feminists and gay rights groups.

Berns died of a glioblastoma in September 2019 aged 36, but her words and videos are still cited by activists, among them JK Rowling, who paid tribute to her as an ‘immensely brave young feminist and lesbian’ in her 2020 Twitter essay.

Magdalen Berns, who died in 2019 aged 36, was a co-founder of For Women Scotland and an influential Youtuber who inspired thousands of women and gay rights campaigners with her videos 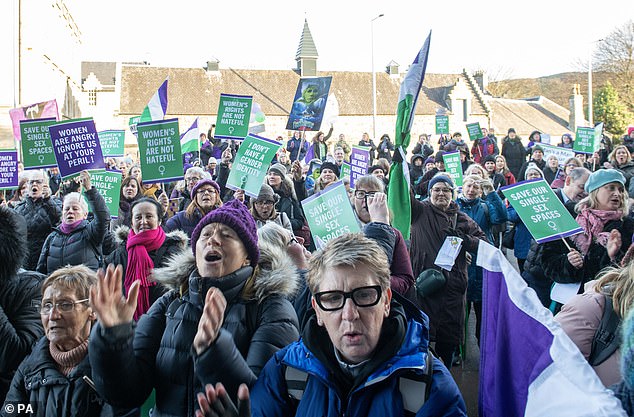 One of Berns’ best-known lines, ‘It is not hate to speak the truth’ has become widely shared. Another quip, ‘I’d rather be rude than a f****** liar’ also emerged as a rallying cry, according to Berns’ friend and fellow activist Venice Allan.

‘I was a member of Momentum and a backer of Jeremy Corbyn,’ said Ms Allan. ‘I watched Magdalen’s videos and they struck such a chord with me. Here was someone saying what I thought before I’d found the words.’

In her videos, Berns typically took apart the claims of gender ideologists whose views she disagreed with, insisting in one: ‘There is no such thing as a lesbian with a penis.

‘Trying to shame lesbians for being lesbians is intrinsically homophobic and misogynistic.’

Elsewhere, she could show a human side, imploring to one opponent: ‘It’s okay to be uncomfortable with masculinity. Do you think I’m comfortable with femininity? Your personality doesn’t make you female.’ 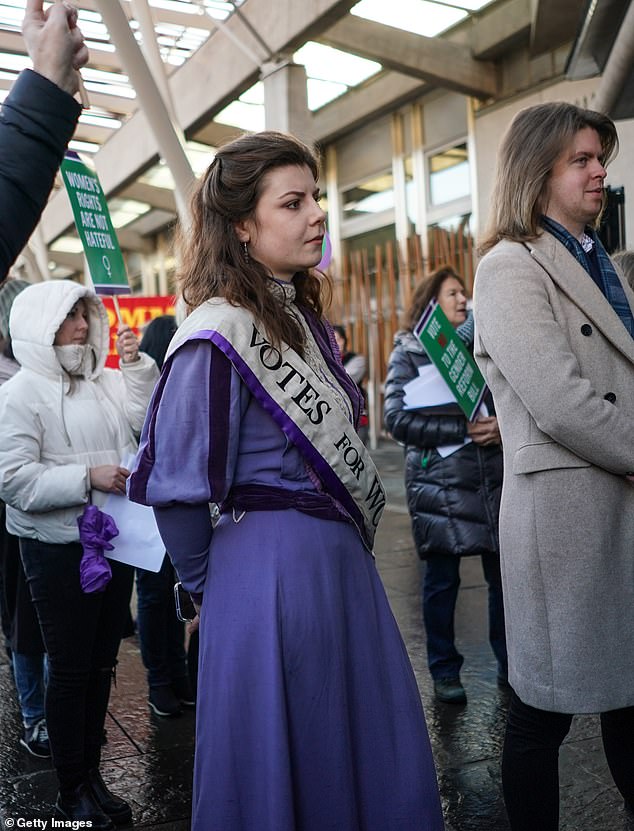 Speaking outside Holyrood after a three-day rally with For Women Scotland, Berns was remembered by her partner Nicole Jones.

Ms Jones said: ‘Magdalen would have been disappointed [by the vote], although it comes as no surprise.

‘She was a deeply kind person who was full of compassion and she cared about women’s and disability rights long before this gender debate came about.

‘It’s time to plan our next move and of course, we wish she was here to help us.’

Born in London, Berns spent her early years protesting against animal testing and fur, handing out leaflets for the Socialist Labour Party, while her mother Deborah Lavin was a founder of the Communist Party of Great Britain.

After working as a sound engineer in the clubs of north London, Berns relocated to Edinburgh in the mid 2010s where she studied physics. 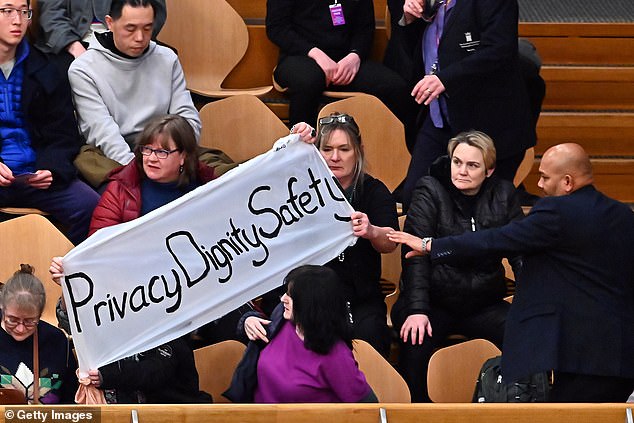 It was in 2015 while at university that Berns began filming her videos, sending up among her targets Stonewall and a host of new vloggers, whose claims she regarded as a threat to lesbians’ and women’ rights.

‘There was a definitely a shift in the air,’ said Marion Calder, who later co-founded For Women Scotland with Berns. ‘Up to that point, there was almost a gentleman’s agreement between feminists and transsexuals – those who had medically transitioned and had the support of a doctor.

‘Along came this new breed of trans activist on our doorstep saying “we’re female, to all intents and purposes” with no medical or social transition.

‘There were other women speaking out about it, but Magdalen was way ahead of the curve in using videos.’

According to Berns’ friend Robbie Travers, at that time an undergraduate at Edinburgh, the shift in transgender politics was accompanied by belligerent activism on campus.

He said: ‘I couldn’t believe my ears. There were male students calling themselves lesbians, saying women who wouldn’t have sex with males were “c*** scum” and should be “annihilated”.

‘I sat there, thinking this was beyond satire, but it was real.

‘Magdalen was investigated by the Students Union and was repeatedly hauled into interviews. They were fishing for an offence. I was questioned by them about what her views were, if she had been radicalised.

‘It seemed to me that it was her opinions that were on trial. She was a committed, leftwing feminist but she became disillusioned with the modern left.’ 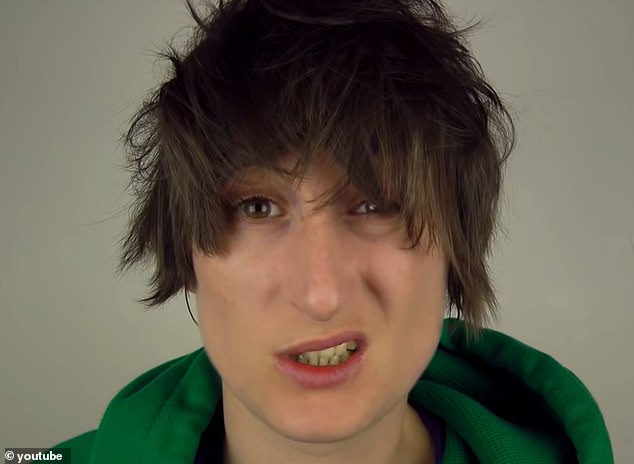 In her videos, Berns regularly took apart the claims of gender ideologists whose views she disagreed with, insisting in one: ‘There is no such thing as a lesbian with a penis’

Berns’ critics often cite a tweet from June 2018 referring to transwomen as ‘f***ing blackface actors’ with ‘perversions’ and who ‘get sexual kicks from being treated like women’, as evidence of transphobia.

Berns later deleted the notorious tweet, which was made during an online spat. But according to those who knew her, while she may have regretted her choice of words, she was unrepentant about her point of view.

In a video about the subject, activist Maria MacLachlan said: ‘I’m not going to defend the language Magdalen uses here, she was harsh and that’s maybe why she had to delete the tweet.

‘But let’s not get all sanctimonious about Magdalen’s angry expression… When you apparently think it’s ok for men to disregard the feelings, the dignity and the privacy of women on the basis of some subjective feeling they claim to have, and yet you are trying to paint Magdalen as the villain here.

‘While some trans-identifying men are obviously sexually-motivated and some are obviously pretty sick, not all are by any means, and actually Magdalen knew that’. 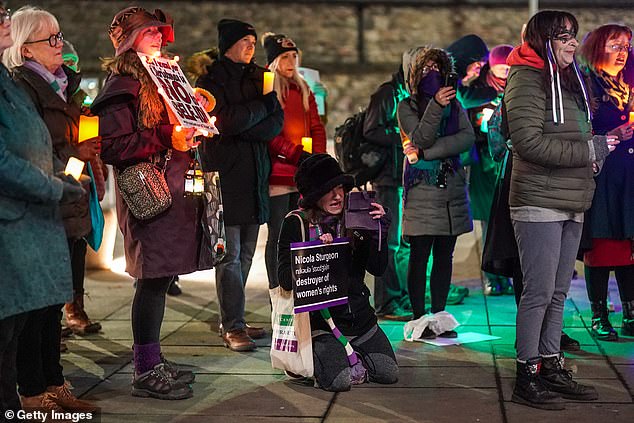 In her June 2020 essay, Rowling wrote: ‘When I started taking an interest in gender identity and transgender matters, I began screenshotting comments that interested me, as a way of reminding myself what I might want to research later.

‘On one occasion, I absent-mindedly ‘liked’ instead of screenshotting. That single “like” was deemed evidence of wrongthink, and a persistent low level of harassment began.

‘Months later, I compounded my accidental “like” crime by following Magdalen Berns on Twitter. Magdalen was an immensely brave young feminist and lesbian who was dying of an aggressive brain tumour. I followed her because I wanted to contact her directly, which I succeeded in doing.

‘However, as Magdalen was a great believer in the importance of biological sex, and didn’t believe lesbians should be called bigots for not dating trans women with penises, dots were joined in the heads of twitter trans activists, and the level of social media abuse increased.’

To those around her, the experience of being thrown out of half a dozen student groups had the effect of galvanising Berns’ activism and she pursued making her Youtube videos with renewed vigour.

Berns was the first to interview Wiltshire mother-of-four Kellie-Jay Keen, then using the moniker Posie Parker, after she was questioned by police over complaints of tweets by Susie Green, former CEO of trans children charity Mermaids

She also took part in demonstrations and gained rapid recognition among women’s rights campaigners across the world.

Ms Calder, recalled their first meeting years earlier: ‘I’d only seen her videos and I was expecting this 6’5″ amazon to walk in.

‘But in came this tiny woman, people don’t realise how petite she was. Her personality was huge, she had the courage of a 6’5 amazon.’

Sadly, Berns’ involvement with For Women Scotland was hampered as her health began to worsen. She was given the diagnosis of a terminal glioblastoma in summer 2019.

‘It’s a difficult thing to be told that you’ve got something that can’t be cured, but I’m not going to let it define me’, Berns is reported to have said, while adopting a stoic front.

After moving into a hospice in Edinburgh, Berns was told JK Rowling was following her on Twitter and had got in touch. According to Ms Calder, Berns’ reaction was simply, ‘that’s cool’.

‘Magdalen wasn’t someone who was impressed by celebrity, but even she knew it would have an impact’ Ms Calder added.