A furious row has erupted over ‘seat-saving’ protocol on trains after a commuter slammed a fellow traveler for using her bag to reserve a space for a friend.

The irate commuter, who takes the same train to work daily, claims the fellow traveller saves a seat for her friend every day amid the morning rush hour.

In a post on Mumsnet, she questions the rules around saving seats in this manner, especially when the train is ‘rammed’ and people are standing around her.

And is especially irked that, despite being asked to remove the bag, the woman maintains her stance claiming she is ‘saving the seat her pal’.

In a post on Mumsnet, a commuter has questioned the rules around saving seats on trains, especially when it is ‘rammed’ and people are standing around

The irate commuter, who takes the same train to work daily, claims the fellow traveller saves a seat for her friend every day amid the morning rush hour (above and below)

‘Every morning a woman on my train saves her mate a seat,’ the anonymous commuter writes.

‘Every morning the train is rammed and loads of people ask her to move her bag but she refuses and saves she saving it for her pal, who eventually shows up.

‘People end up standing, the seat free, then pal arrives. I’ve seen a couple of people ignore her, move the bag and plump down in the seat, the entire train almost cheered.

And in a second post, clarifying the routine of the commuter and her friend, she writes: ‘They do not get on at the same stop. Saver is always on already, “saving” as it were, then pal gets on.

‘So what does seat saver do when people just move her bag?’

The question has sparked a blistering row over seat saving etiquette, with many respondents saying people should move the seat-saver’s bag.

One said ‘sit on the bag’, while another added ‘no saving on busy public transport’. Others said ‘move the bag of course’, and with another adding ‘Yep, move the bag. She’s being ridiculous.’

The question has sparked a blistering row over seat saving etiquette, with many respondents saying people should move the seat-saver’s bag (above and below) 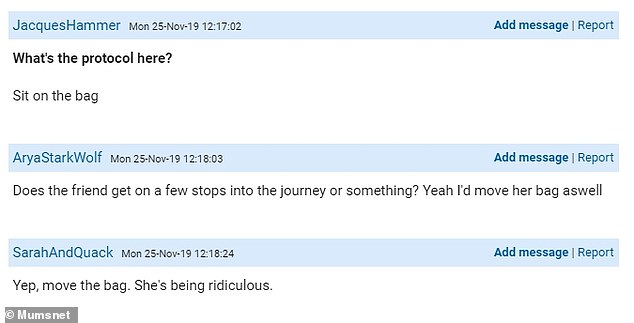 In a more lengthy response, one person said: ‘If they are getting on at the same station and it’s just taking them a while to get through the train, fine.

‘If they are getting on anywhere else, tough. If you want to sit together you go to the back, assuming a commuter train into London where the carriages at the back tend to be a bit emptier. Or stand up somewhere and chat if no room to sit.’

While another said: ‘Protocol is to remind her that if there isn’t a reservation it’s not her friend’s seat and that if she doesn’t move her bag you will and you won’t be careful about it.’

Others were more sympathetic, suggesting that if they were getting on at the same stop it would be ok.

‘Maybe friend has mobility issues. Not OK if it’s further down the track,’ they wrote.

While another said: ‘I used to catch the train to school. We often used to save seats for our friends who got on at a later stop in our compartment but we always moved our things at the very first request.’

But most are against the commuter, with the original poster saying she agrees with the following: ‘Ugh I’m always so surprised these people are so entitled and with no shame when most of us would be embarrassed!

‘I would say that’s not fair, please move your bag and sit down. Or no, I’m here now I’m going to sit down so move your bag. But that’s assuming she will then concede and people like this don’t do that.

‘Then I feel stuck because I don’t want to physically move their stuff or cause a row, mainly because such entitled people are the first to then play the victim and accuse their confronters of being violently aggressive / damaging their property etc.

‘If anyone has a foolproof way of dealing it then I want to know too!’