A trainee bricklayer has been left scarred for life after suffering a bleed on the brain when he was allegedly attacked while out celebrating his 21st birthday.

His loved ones, who received a call telling them he was in hospital, have launched an emotional appeal to find the person, or people, responsible for the attack.

Ryan, a student bricklayer from Moorside in Oldham, was out with friends on Sunday ahead of his birthday on Monday. 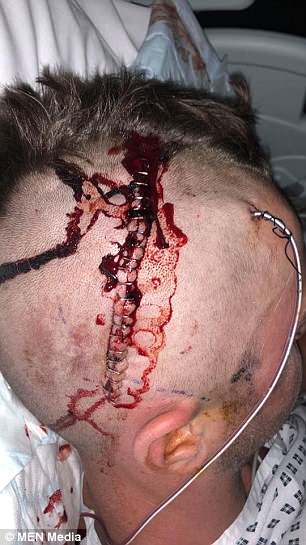 Ryan Baxter, left, with his girlfriend Georgina Moran, was out celebrating his 21st birthday when it is thought he was attacked. He was rushed to hospital where he was treated for a bleed on the brain, right

The group enjoyed drinks at a few different venues, before ending up at Lions Bar.

Ryan left the bar and was later found near a taxi rank nearby on Market Street.

Paramedics rushed Ryan to Tameside Hospital. He was later transferred to Salford Royal for urgent surgery.

Ryan’s sister Kylie, 29, said her brother is now out of critical care, but has been left with a large scar on his head.

Her family is now urging anyone with information to come forward.

‘I got the call in the morning saying Ryan was in hospital and that the police thought he had been assaulted and had hit his head,’ Kylie said.

‘He had a bleed on the brain, so they had to operate and he’s been left with a huge scar down his skull.’

Ryan’s family shared a photo showing the graphic aftermath of his surgery on Facebook, hoping that by doing so it would encourage witnesses to contact police. 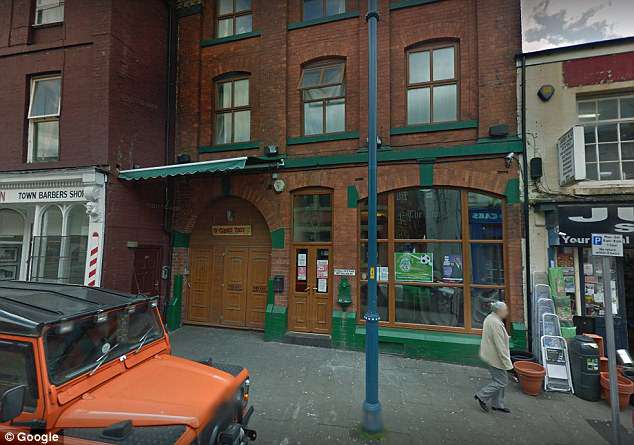 Ryan and the group enjoyed drinks at a few different venues, before ending up at Lions Bar, pictured. Ryan left the bar and was later found near a taxi rank nearby on Market Street

Kylie added: ‘We’re trying to piece together what happened to him that night.

‘Ryan goes to Tameside College, which is why he was in Stalybridge.

‘Him and his friends had been to a few different places and ended up in Lions Bar.

‘The next thing he was found collapsed outside near the taxi rank.

‘We took him in some balloons and cake, and although he’s out of critical care we still don’t know when he will be able to come home.

‘Someone has to have seen something, things like this don’t happen without someone seeing something.’

A spokesman for Greater Manchester Police confirmed the incident was being investigated as an assault.

They added: ‘Shortly before 2.50am on May 27 police were called by the fire service to a report that a man had collapsed on Market Street, Stalybridge.

‘The man was taken to hospital, where he remains for treatment to a serious head injury.