A trainee teacher has avoided jail for glassing a man in the face during a Christmas Eve row over a scarf.

Megan Bradley left her victim scarred for life in what a judge described as a ‘reckless act’.

But the 19-year-old was allowed to walk free as her act of violence was ‘completely out of character’.

Bradley used the glass ‘as a weapon’, picking it up and throwing it at the victim’s face when he tried to retrieve his scarf from her friend who was refusing to hand it back.

Prosecutor Tom Sherrington told Manchester’s Minshull Street Crown Court that Ms Bradley’s had picked up the scarf and put it on, causing the victim to ask for it back.

The court heard how the victim is now ‘very nervous in groups and social situations’ following the incident.

Patrick Harris, defending, told the court how Bradley had left her university teacher training course because of the conviction and her ambitions now lay in tatters.

He pointed out that a pre-sentence report prepared by the probation service had ‘reflected that this woman was of previous good character’.

The barrister described his client, who dreamed of being a primary school teacher, as ‘industrious with a very good work ethic’. 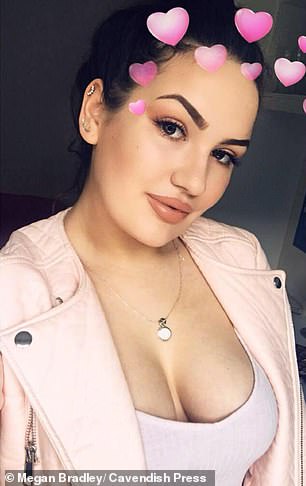 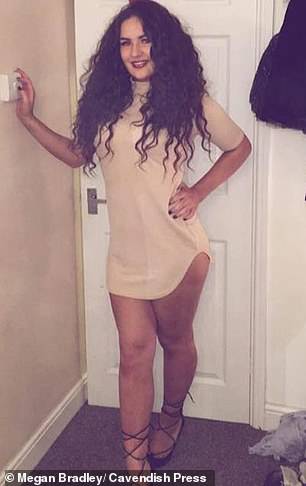 Bradley (pictured left and right) used the glass ‘as a weapon’, throwing it at the victim’s face when he tried to retrieve his scarf from her friend who was refusing to hand it back

Judge Bernadette Baxter said the argument was ‘something and nothing over a scarf’ that her friend had refused to return to its owner.

She told Bradley: ‘You had a glass in your hand and you threw it at (the victim). I accept that was a reckless act.

‘You threw it towards him but not as an act to defend your friend but in the aggression of the moment.’

The judge accepted that the defendant had not intended to cause her victim serious injury but it caused cuts to his face ‘which have left him with permanent scars’.

He said: ‘You must know as an intelligent girl this is a serious matter. You used that glass as a weapon. You threw that glass.

The judge said the fact she pleaded guilty ‘at the first opportunity’ and that she was ‘a respectable girl from a respectable family’ was ‘powerful mitigation’.

Judge Baxter accepted the attack was ‘completely out of character’ but added: ‘Nevertheless there must be consequence.’

She handed Bradley a suspended 12-month jail sentence and ordered her to pay £350 compensation to her victim.

Bradley, of Cheadle, admitted a single charge of wounding.