East Midlands Railway has said that it will lock passengers out two minutes before departure from its main London terminus from next month.

This is up from the present one minute and is a move to try and make more services run on time leaving from London St Pancras.

It is the second operator to use the rule, alongside London North Eastern Railway and will apply to routes on the main Nottingham and Sheffield lines.

A watch dog has branded the new two-minute rule ‘excessive’, saying it could lead to an increase in people running for trains through the station.

Now it is feared that other train operators will do the same following the introduction of ‘on time’ performance measures.

These new monitors rank companies based on the number of trains reaching a station within a minute of their scheduled arrival time.

Intercity operators were said to be ‘on time’ if they arrived within 10 minutes of the timetable and with commuter routes the figure stood at five minutes.

Research from The Times showed most closed their doors 30 seconds before departure and Virgin Trains recently cut its threshold from Euston from two minutes to 90 seconds. 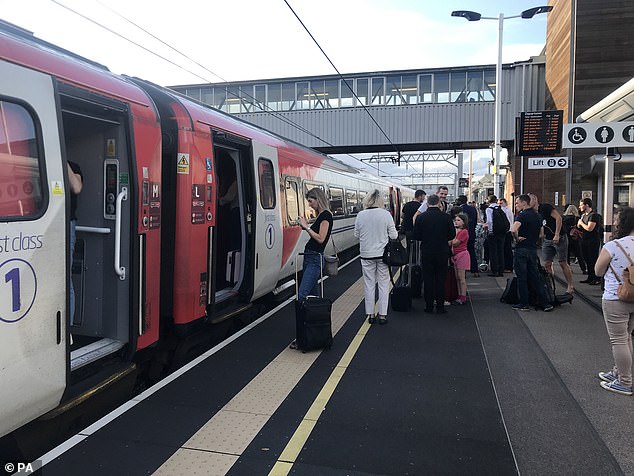 A watch dog has branded the new two-minute rule ‘excessive’, saying it could lead to an increase in people running for trains through the station

Anthony Smith chief executive of Transport Focus said: ‘We know that passengers are already at risk from trips, slips and falls and there is a danger that we will get a lot more people running through stations trying to reach the platforms.’

East Midlands carries 27 million passengers a year and will from Tuesday December 3 introduce the new timing at services leaving from London St Pancras.

A spokesman said that passengers should allow extra time to pass the ticket gates.