Transgender pupils to use changing rooms and toilets of their choice, according to leaked guidelines

Girls’ rights are IGNORED so that transgender pupils are free to use whichever school toilet they want, equality watchdog report suggests

New guidelines which allow transgender pupils to use the same changing rooms and toilets of their choice have been criticised for ‘ignoring the rights of girls’.

The draft document from the Equality and Human Right Commission (EHRC) is expected to be introduced in October.

It wants to protect children who meet the legal definition of gender reassignment as well as pupils ‘who are simply exploring their gender identity’.

The confidential guidelines seen by The Sunday Times apply to children of all ages in England and Wales regardless of whether they have had medical intervention.

They state that pupils who identify as a different gender should be allowed to use changing rooms of their choice at schools.

Girls uncomfortable with this will then be advised to use a private changing room.

The guidelines also recommend that trans girls should have sex education lessons with girls, and it would be ‘unlawful indirect discrimination’ to place them with boys. 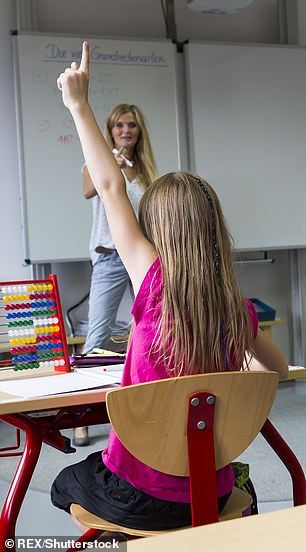 On school trips, trans pupils will be able to sleep in the same rooms as pupils of their preferred gender and they will also cannot be excluded from the single-sex sports of their choice.

Teachers are warned in the document they would break the law if they failed to call transgender pupils by their chosen names and pronouns.

Tanya Carter, of the campaign group the Safe Schools Alliance, slammed the draft which ‘ignores the rights of girls’.

She said: ‘The EHRC has not listened to the voices of the concerned parents and teachers who would have to deal with the fallout if these policies are put into practice.’

David Isaac, chairman of the EHRC, said: ‘There are strong views and the debate had become very polarised. We are consulting with teachers, parents and various pro trans and feminist groups.’

The EHRC said in a statement: ‘This document is a draft. This will be an important document for schools to help them support all children and meet their legal duties under the Equality Act.’