There was fury today after a transgender rapist attacked two women as a man then changed gender before the trial.

Isla Bryson was a shaven-headed Adam Graham with a Mike Tyson-style face tattoo when she carried out the violent sex attacks in 2016 and 2019 after abusing the victims she originally met online.

Bryson, who claimed to have had gender issues since the age of four, began transitioning from a man to a woman in 2020 after being charged with the rapes. The attacker denied the accusations, telling jurors any sex was consensual – although Bryson insisted she did not like sleeping with women and they made the ‘first move’.

There was no reference to the 31-year-old having a gender recognition certificate during the trial.

It is understood Bryson is being held in a segregation unit at Cornton Vale women’s prison, where the attacker will be risk assessed ahead of sentencing to see where she will serve her term.

Today Bryson was found guilty of the two rapes. The defendant denied the charges, saying in evidence she ‘would never hurt another human being’. Her defence KC Edward Targowski even told High Court in Glasgow: ‘If you accept that evidence, that she is transitioning, that she is aiming to continue on that path to becoming female gender, that goes a long way to acquitting her of these charges’.

Scottish Conservative shadow community safety minister Russell Findlay said today: ‘This rapist decided that he was no longer a man only after appearing in court on a rape charge.

‘We now have the utterly perverse situation where a Scottish court refers to someone who says he identifies as female using ‘her penis’ to rape two vulnerable women.

‘We warned of the inevitability of this happening if the SNP’s gender self-ID law passed, but for it to have become reality is deeply worrying and an affront to the victims.’

Isla Bryson, 31, (pictured) ‘preyed’ on vulnerable women and was convicted of two rapes today. Bryson was known as Adam Graham (right) and had a Mike Tyson-style face tattoo when she carried out the violent sex attacks in 2016 and 2019 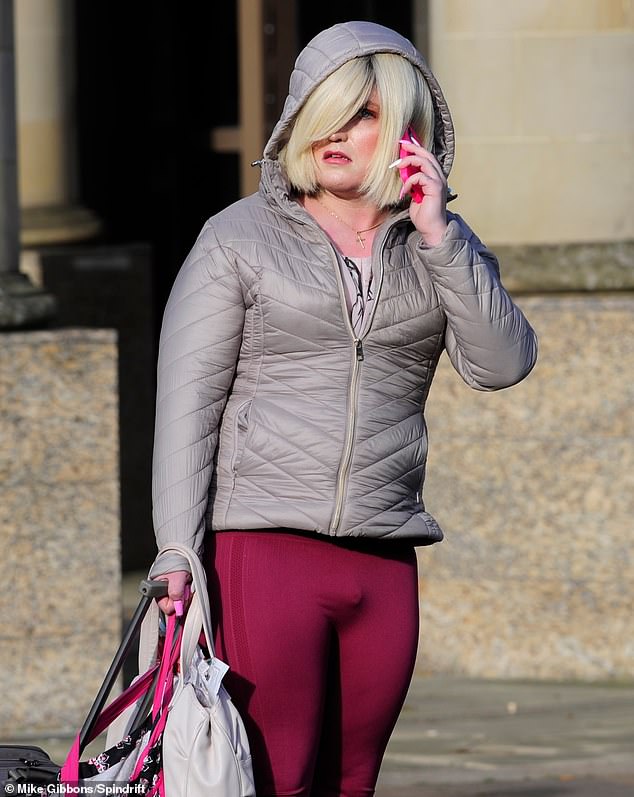 Isla Bryson, 31, (pictured) ‘preyed’ on vulnerable women and was convicted of two rapes today. Bryson was known as Adam Graham (right) and had a Mike Tyson-style face tattoo when she carried out the violent sex attacks in 2016 and 2019 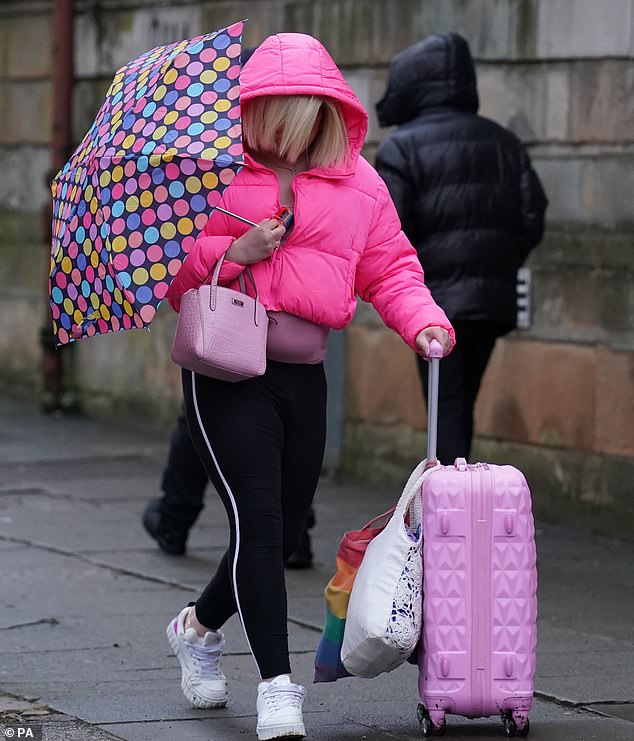 Isla Bryson, 31, from Clydebank, West Dunbartonshire, arrives at the High Court in Glasgow yesterday. Following a six-day trial at the High Court a jury has found the transgender woman guilty of raping two women when she was a man

The first victim recalled repeatedly stating ‘no’ as her ‘muscular’ attacker raped her when the then man got into bed beside her in 2016. The second woman was raped at a flat when they were planning to watch the film Mean Girls in 2019.

Bryson had first appeared in the dock in July 2019 as Adam Graham. By the start of her six-day trial the defendant was known as Isla Bryson. Bryson is currently taking hormones and seeking surgery to complete gender reassignment.

In December around 60 protesters gathered outside Cornton Vale when trans woman paedophile Katie Dolatowski was sent there. It came amid ongoing controversy over Nicola Sturgeon’s Gender Recognition Reform (Scotland) Bill (GRR), which would allow anyone anyone over 16 to ‘self-identify’ as the opposite sex without needing medical diagnosis of gender dysphoria. 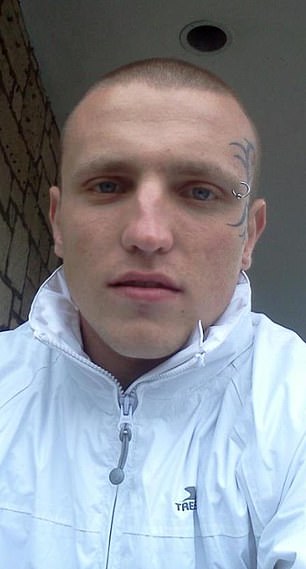 Isla Bryson, was previously known as Adam Graham and born a man. She began transitioning in 2020, aged 29

The Scottish law would allow people to seek a gender recognition certificate after living in their new gender for just three months, and without the need for medical evidence.

Campaigners warned it could allow biological males to access women-only spaces such as changing rooms, prisons and hostels for battered women, undermining current protections in the Equality Act, which covers England and Wales as well as Scotland.

The gender law was passed by the Scottish parliament last month, with the backing of Labour and the Liberal Democrats as well as the ruling SNP.

Today Isla Bryson appears to be heading to an all-female jail.

Tory MP Miriam Cates told MailOnline: ‘It is almost impossible to believe that in a civilised society a man convicted of raping two women can be remanded in a women’s prison.’

At the trial, the defendant was known as Isla Bryson with jurors told Adam Graham was now her ‘dead name’ – one ‘a transgender person was given at birth and no longer uses upon transitioning’.

Bryson told her trial that she has received hormone treatment and is expecting further, adding: ‘I obviously want all the surgery that the NHS can provide’.

The defendant had attacked the first victim at a flat in Clydebank, West Dunbartonshire having met on the Badoo dating site while known as Adam.

This was immediately after Bryson’s marriage to a woman had ended.

In her evidence, Bryson claimed she had effectively used the 30 year-old for somewhere to stay.

But, the victim told how she had been ‘head over heels in love’ with Adam. However, she soon suffered as Adam went from ‘caring’ to flying into a rage at trivial matters.

The rape occurred on September 16 2016 after Bryson locked the door and got into bed beside her.

In pre-recorded testimony played to jurors, the victim said: ‘I thought Adam had came for a cuddle and – at that moment – everything felt weird and wrong.

‘I did not know what was going on.’

The woman recalled repeatedly stating ‘no’ as a ‘muscular’ Adam forced himself upon her.

The ordeal only ended when the victim’s mum turned on a light in the hall.

The second woman was raped at a flat in Drumchapel, Glasgow on June 27 2019.

Bryson told jurors how she had shared her ‘sexuality issues’ with the 34 year-old having met on the social media site Bigo. 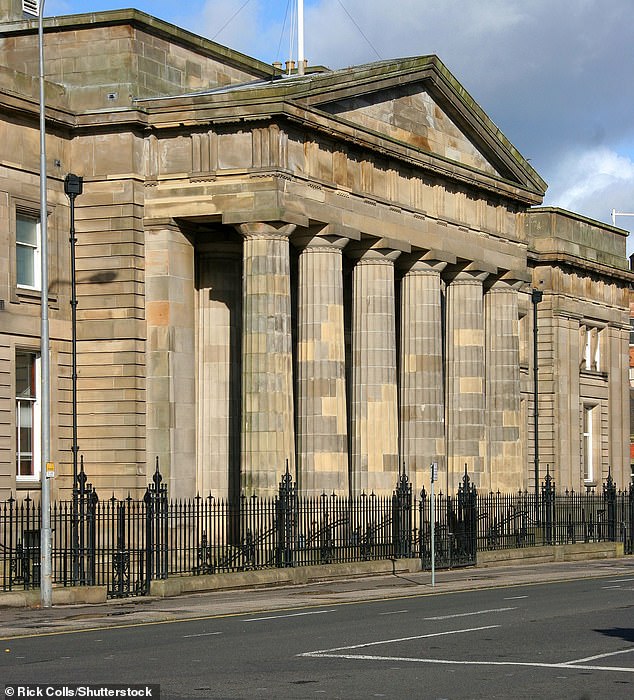 The court heard the pair were together at the flat planning to watch the film Mean Girls.

The victim recalled feeling ‘crushed’ as the attacker she knew as Adam forced himself on her.

She stated: ‘I told him to stop and he did not. He kept going. That is when I closed my eyes and let him do what he wanted to do.’

In her own evidence, Bryson – who said she was ‘scared’ in the witness box – often became emotional as she refuted the charges.

Bryson did admit ‘cheating’ on the first victim adding: ‘She loved me. It kills me because I hurt her like that.’

Regarding sexual contact with the second woman, Bryson told jurors: ‘I did not make the first move. I can assure you.’

Bryson’s lawyer had also asked her today about her gender issues. Bryson said she was first aware of this when she was four.

Bryson told jurors: ‘I was always hanging about with the girls and always doing make up.’

Bryson said she first made the decision about ‘transition’ from a man to a woman in 2020 after she first appeared to face the rape charge.

Bryson has received hormone treatment and is expecting further. Asked about surgery, the defendant stated: ‘I obviously want all the surgery that the NHS can provide.’

After the verdict, prosecutor John Keenan KC said the first rape attack had been reported to the authorities in 2016, but that there were no further ‘proceedings at that stage’.

Lord Scott deferred sentencing on Bryson until February 28 in Stirling.

Bryson already had three summary level convictions – not for sexual matters – and has never been jailed before.

But, the judge told her: ‘You have been convicted of two extremely serious charges.

‘Given what you have been convicted of, a a significant custodial sentence is inevitable.

‘I will revoke bail and remand you in custody meantime.’

Bryson had turned up most days with a large suitcase. The media and public had to watch proceedings from a viewing room elsewhere in the court building.

A previous trial was abandoned due to Bryson reporting being unwell after having her photo taken as the defendant arrived at court.

It is understood Bryson will be held in the segregation unit at Cornton Vale women’s jail in Stirlingshire.

This is a unit where inmates can be held for their own safety or the safety of other prisoners.

A subsequent move to the general population, alongside other women, is possible pending a risk assessment.

Prisoners can held in segregation for years but it must be kept under regular review to comply with human rights laws.