Transgender women will still be allowed to play domestic rugby in England after the Rugby Football Union decided not to adopt the world governing body’s rules.

The RFU decided ‘further scientific evidence’  was needed before rules about transgender players – adopted by World Rugby last week – could be taken on.

In February, World Rugby launched a review into whether transgender women should be allowed to play on women’s rugby teams due to concerns about increased risks of injury, which they say comes from independent research.

A report said there could be ‘at least a 20-30 per cent risk’ of injury when a female player is tackled by a player who has gone through male puberty, as reported by the BBC.

When the review came to a conclusion earlier this month, the global governing body for the sport found ‘safety and fairness cannot presently be assured for women competing against trans women in contact rugby’.

Trans women are banned from international women’s games, while trans men are still able to play on men’s teams – providing they show they understand that the potential-injury risk during a match is much higher.

But the RFU opted not to take on the ban – which offered ‘flexibility’ to different national bodies.

A spokesperson told The Guardian: ‘The RFU does not currently plan to adopt World Rugby transgender guidelines as it believes further scientific evidence is required alongside detailed consideration of less restrictive measures in relation to the eligibility of transgender players.’

It said it will look into safety concerns as well as the evidence put forward. 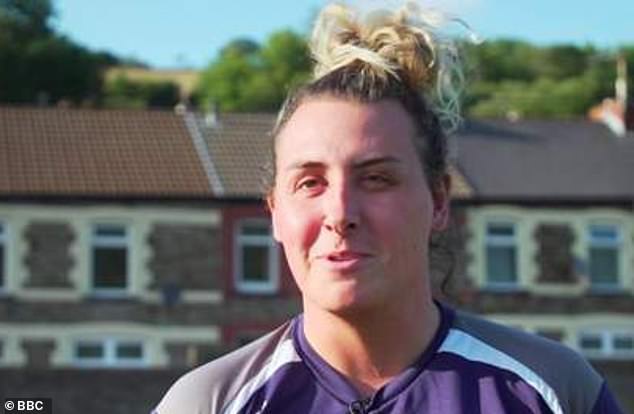 The spokesperson added: ‘The RFU will also undertake further consultation with players in the women’s game to understand their views.’

‘The RFU is committed to LGBTQ+ inclusion as well as safety and fairness across all levels of the game.’

As the rules now stand, transgender women can play women’s rugby in the UK if they lower their testosterone levels for at least 12 months.

They are not able to compete in international games however, including  Six Nations or in the Olympics.

In a 2019 interview with the BBC, she said she accepted that size and strength could give trans women an advantage. 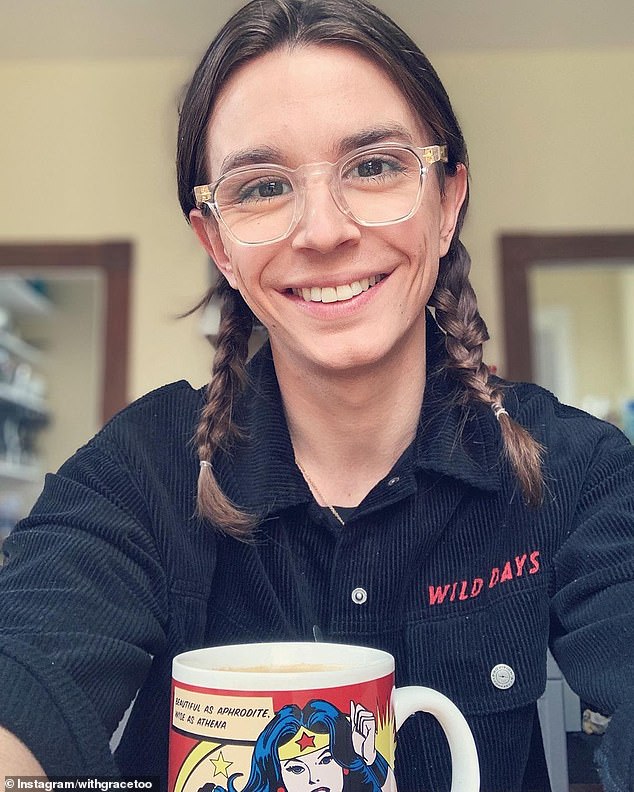 She said: ‘I do feel guilty, but what can you do? I don’t go out to hurt anybody. I just want to play rugby.’

Trans rugby player Grace McKenzie plays for the Golden Gate Women’s rugby club in San Francisco and said the sport allows her to ‘just focus on living and enjoying myself’.

She told the BBC – prior to World Rugby’s decision – in August: ‘I think the fear of losing rugby as a community and supportive space has been weighing on me quite heavily.

‘There isn’t a moment I don’t worry about losing that access.’

The British athlete, 57, argued the decision was ‘about safety’ while transgender footballer Blair Hamilton, from Brighton, argued that the scientific evidence backing the choice wasn’t strong enough. 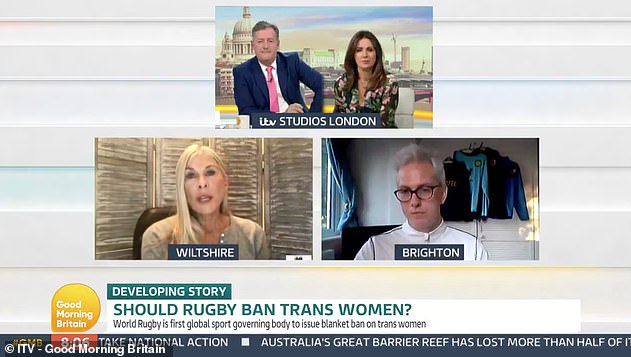 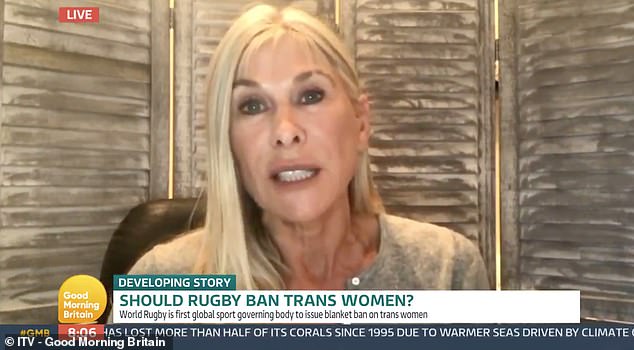 The British athlete, 57, appeared from her Plymouth home to argued the decision was ‘about safety’ 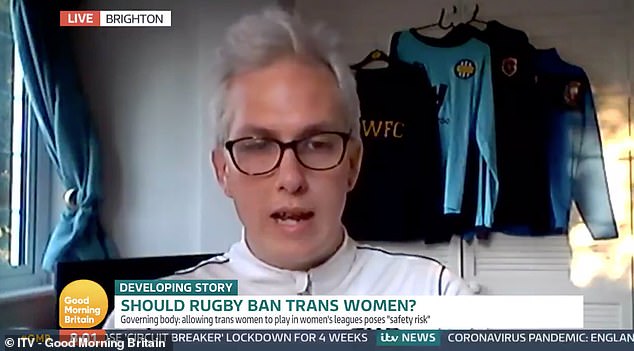 Blair, 29, Brighton, who transitioned from male to female two years ago, argued that this decision was come to without strong enough evidence

‘It’s about safety, but it’s about fairness as well,’ said Sharron, ‘How would any female athletes win any medals, have any success, if women who were born as men are allowed to compete?’

The swimmer feels that segregation in sport is down to ‘obvious reasons’, and that rules should not be changed without first assessing the ‘benefits’ that being born as a biological male brings.

She added later: ‘Ultimately this is about fairness, we’re trying to create new rules for something that is a modern phenomenon. We’ve had segregation in sport for centuries for obvious reasons.

‘You wouldn’t have a 15-year-old boy competing in the under 10s because it wouldn’t be fair and basically you’re asking the same for women’s sport.

‘What we’re saying is let’s do the science first, so we can assess any benefits male biology brings, so we can make it fair for women to achieve medals and careers and scholarships they are entitled to.’