A top travel boss who unleashed a violent rant at TV host Tracy Grimshaw has apologised for his remarks in a bungled interview on her own program.

In a leaked recording, Jayson Westbury was heard saying the A Current Affair host needed ‘a firm uppercut or a good slap across the face’.

Confronted with his words during an interview on the program on Wednesday, he blamed it on being ‘cranky’ during a difficult time for the travel industry.

The disgraced executive has since resigned as CEO of the Australian Federation of Travel Agents (AFTA).

In the recording, made during a disgruntled rant about how Ms Grimshaw’s show was covering the industry’s refund scandal, he said: ‘I think that Tracy Grimshaw needs to be given a firm uppercut.

‘Or a slap across the face, and I mean that virtually, of course, I wouldn’t want to invoke any violence on anyone.’

Upon hearing the recording, he told reporter Brady Halls that he ‘unreservedly apologised’ for the remarks.

They had been made during an AFTA webinar last Friday with about 100 people listening.

‘I unreservedly apologise for that statement,’ he said.

‘That was a bad choice of words by me, it was a heightened time there was a lot of member disgruntlement.’

Questioned about whether it was appropriate for a man to make such comments about a woman, he added: ‘I don’t know what to say about that. 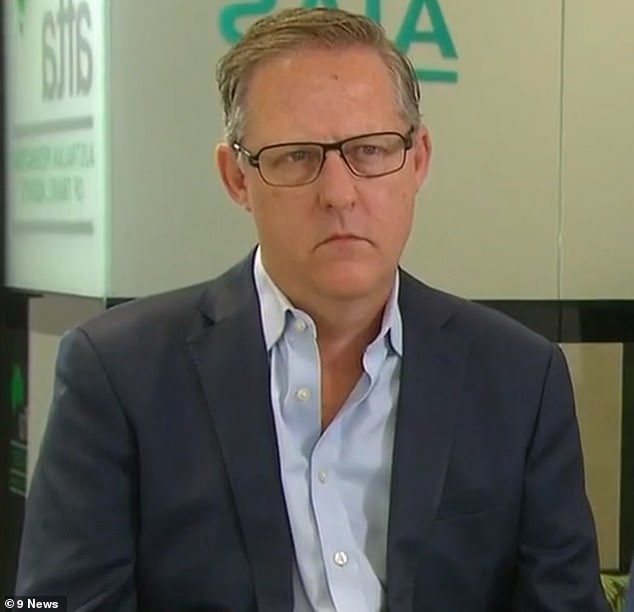 Jayson Westbury (pictured apologising on A Current Affair) has since resigned as chief executive of the Australian Federation of Travel Agents.

‘Things have continued this week,’ he said in an online seminar.

‘I won’t ever be watching [ACA] again.

‘I think that Tracy Grimshaw needs to be given a firm uppercut or a good slap across the face.

‘And I mean that virtually, of course, I wouldn’t want to invoke any violence on anyone.’

‘There is a lot of cranky travel agents out there because… well yeah… we’re all cranky.’

The embattled travel industry has been hit hard by the coronavirus pandemic, with travel banned for all Australians.

Many have lost their jobs, while thousands of disappointed holidaymakers battle to receive refunds for their cancelled trips.

Mr Westbury’s scathing comments came a week after ACA reported that an Australian family was left $11,000 of dollars out of pocket after STA Travel refused to refund a holiday to the United States. 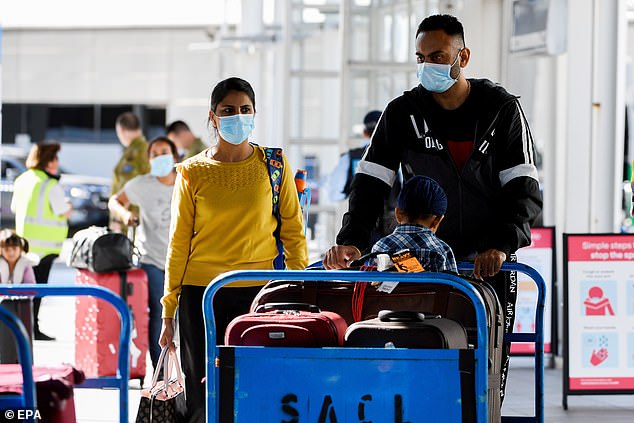 The travel industry has been badly hit by coronavirus restrictions (pictured, a couple heading to quarantine after returning to Sydney from New Delhi on May 8)

Following his remarks, women’s groups and outraged Australians took to social media to call for the executive to be fired.

‘Pretty rich calling comments outrageous when in the same sentence you talk about inflicting violence on someone… only two things you can do here. Resign or be terminated,’ one comment read.

According to Pew Research, over 90 percent of the world’s population are now living with some form of travel restrictions.

In Australia, even regional domestic travel has been banned across most of the country to slow the spread of COVID-19.

The Age reported a Melbourne midwife was left ‘crying for days’ after being left out-of-pocket and losing half the money she spent to book a dream $20,000 family holiday to Europe and Disneyland. 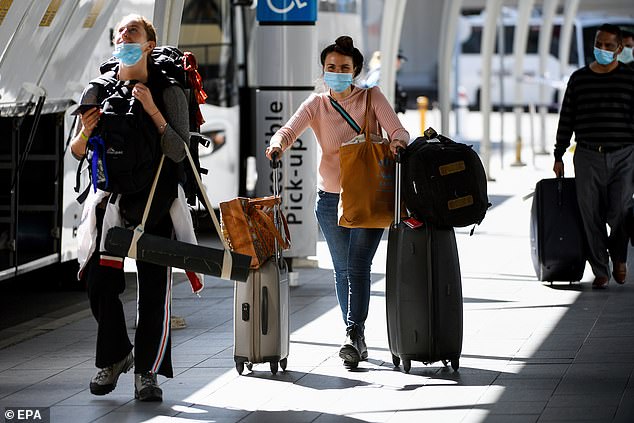 All Australians returing home must isolate in a hotel for 14-days after arriving (pictured, a couple heading to quarantine after returning to Sydney from New Delhi on May 8

Australian Law firm Slater and Gordon has launched a class action lawsuit against major airlines, travel agents and tour companies who have refused to issue monetary refunds and instead opted for travel vouchers and credits.

‘We understand that everyone is doing it tough at present, including the major airlines and travel companies, but that doesn’t give them an excuse to take advantage of their customers,’ Slater and Gordon Practice Group Leader Andrew Paull said.

The law firm believes major travel providers may have breached their legal obligations by putting in place travel voucher schemes that significantly disadvantage their customers.

‘We believe cash refunds should be returned to customers, who almost certainly need that money right now,’ Paull said. 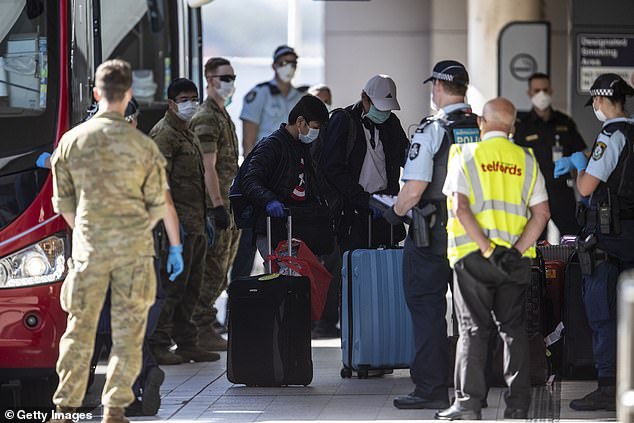 Anyone entering Australia from overseas is required to undergo 14-days of quarantine (pictured, cruise ship crew being sent home on repatriation flights in Sydney on April 23)

Holidays are cancelled: Chief Medical Officer rules out overseas trips INDEFINITELY and says there is ‘no clear roadmap’ to re-opening Australia’s borders

Australia’s Chief Medical Officer has ruled out international travel for the foreseeable future as there is ‘no clear roadmap’ to reopening the nation’s borders.

Professor Brendan Murphy told a Senate inquiry into the government’s response to COVID-19 on Wednesday that border closures remained essential to defeating the pandemic.

‘I can’t see, I have no vision at the moment on the current international scene where international border measures of some very strong vigour won’t be necessary,’ he said.

‘There is no clear roadmap out of this.’

Professor Murphy said interstate and territory borders would be reopened long before overseas travel, noting cases were still being imported weekly through returned travellers who must serve mandatory quarantine periods. 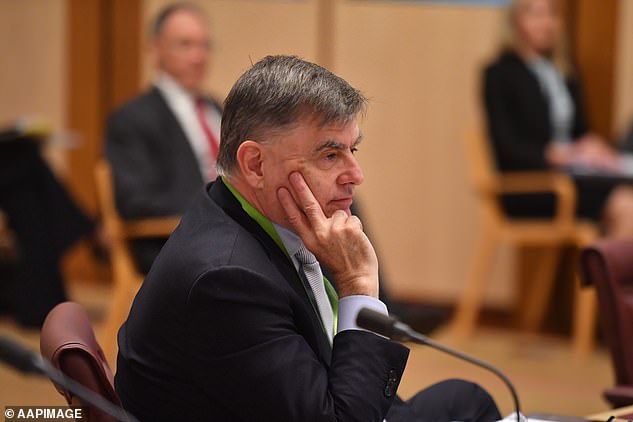 He said Australia’s strategy was to maintain strong suppression, or elimination in parts of the country, while slowly opening up the economy.

He said the nation’s good response to the outbreak and low case numbers had allowed the lifting of some restrictions just weeks after the peak of infections.

The top health adviser said further relaxations would need to be reassessed every few months, and warned more localised outbreaks are expected, like those at Cedar Meats, Melbourne, and in Burnie.

However, Professor Murphy said with the curve now flattened, the public health workforce has the capacity to quickly crush any small outbreak in cases.

He said Australia was now testing ‘much more broadly’ and by doing so hopes any newly emerging risk areas will be nipped in the bud. 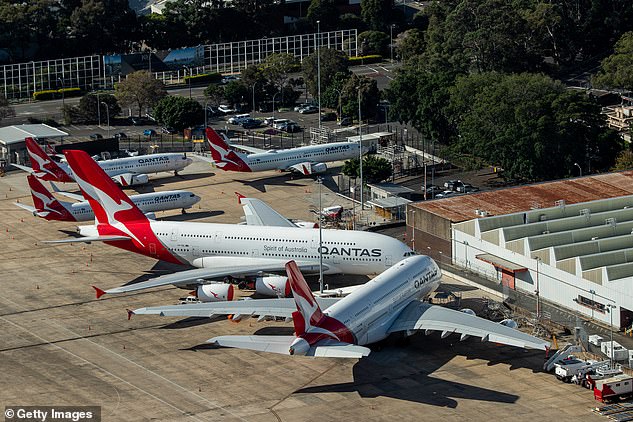 While Australians are set to be grounded at home for months to come, they could soon be allowed to holiday across domestic borders. Qantas jets are pictured parked at Sydney airport on April 22

The number of reported cases worldwide hit 4.3 million on Wednesday, however Professor Murphy told the inquiry he believed the true number of people who had contracted the virus is five times higher.

He explained that the death rate in countries with good testing sits around one to two per cent, but it has been as high as five to ten per cent in other nations across the world.

Because of this, Professor Murphy believes many cases have not been reported and the true amount of cases could sit around 20 million.