By Rebecca Rutt For Thisismoney.co.uk

Travelex has confirmed it is scrapping the popular Supercard which allowed customers to avoid expensive overseas transaction fees.

It has said the running costs of the card were ‘much higher than anticipated’ and it has now made the decision to scrap the card on 24 July.

After 00.01 on the 24th existing cards will no longer be valid and any new cards that have been applied for will not be issued.

The Supercard launched in June last year and allowed customers to link their existing credit and debit cards to a Mastercard via an app and use it to pay for items they bought abroad.

Any spending on the card appeared as if it was a domestic payment and avoided the usual three per cent transaction fee usually charged by most banks and card providers.

While using the card, customers would be able to use the wholesale exchange rate without any extra charges for making purchases – although ATM withdrawals cost 2.99 per cent.

Travelex is informing customers today about the card’s withdrawal. The app will continue to work until 24 October to allow customers to track past transactions.

The card also came with travel insurance as an added freebie and after 24 July this will no longer be valid.

A spokesperson from Travelex said: ‘Unfortunately, the costs of running Supercard and delivering the standards of service we expect have been much higher than anticipated. As a result, we have made the difficult decision to close Supercard. 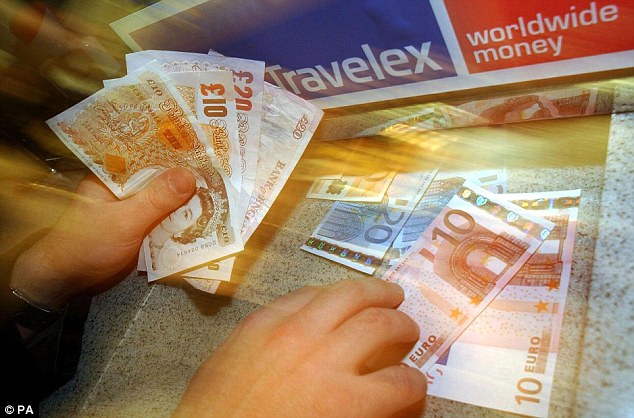 Holidaymakers with a Supercard could avoid expensive overseas fees for transactions

‘At Travelex we strive to develop innovative products that provide our customers with great value and exceptional service. We are grateful to all our customers who embraced this new concept and apologise for any inconvenience caused.’

We asked Travelex if the Brexit vote had made an impact on its decision to close the card but it replied saying the reason it was being removed was because of the costs involved.

It also wasn’t able to tell us how many customers currently have a Supercard but as this was one of the company’s leading cards, and it is such a big player in the foreign exchange market, it’s likely a lot of people will be affected.

After 24 July the cards will no longer work and if you have one Travelex says you can throw it away after this date.

The card became available to buy in June 2016 although some people could get it through a limited pilot scheme from 2015.

Last year My Travel Cash decided it was also scrapping one of its leading cards. It made the decision in August to scrap its prepaid card on 4 October.

It said the card was scrapped because WEX, the company which owned it, said it was ‘refocusing all of its efforts in support of its strategic objective to grow our corporate virtual card business globally and, in particular, in Europe.’

A number of current accounts and credit cards do not apply extra fees when spending abroad. For a full round up and a selection of the best prepaid cards on the market see our guide on the cheapest way to spend abroad.

Most credit and debit cards will charge hefty fees of around 3 per cent for foreign transactions, with extra charges for withdrawing cash abroad.

If you would rather not change banks, currency cards offer holidaymakers the chance to load up a card with money to spend while they are away and potentially benefit from lower rates.

You can find out more about how these cards can help you save money and where to find the best deals in our roundup here.

FairFX is offering This is Money and MailOnline readers a free mastercard prepaid currency exchange card, which usually costs £9.95