Travellers in rickety caravans have descended on the famous Mercedes-Benz World attraction before lighting fires and leaving their rubbish near the track.

The group invaded an area owned by the German car manufacturer in the late hours of Thursday and officials have desperately been trying to evict them ever since.

On Saturday, police officers were spotted assisting bailiffs in their attempts to evict the squatters.

Mercedes-Benz World is based at the historic Brooklands motor racing circuit, which lies close to the affluent town of Weybridge in Surrey. 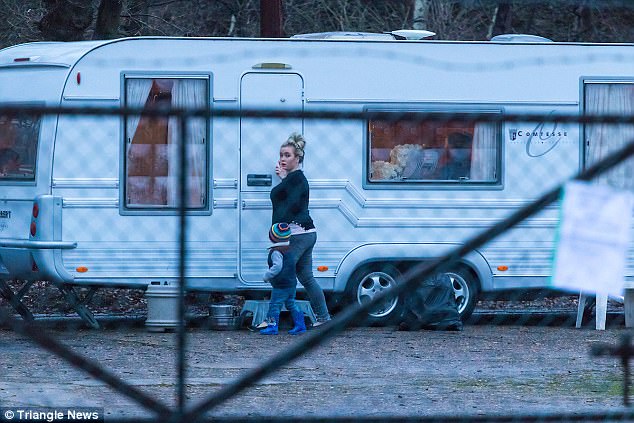 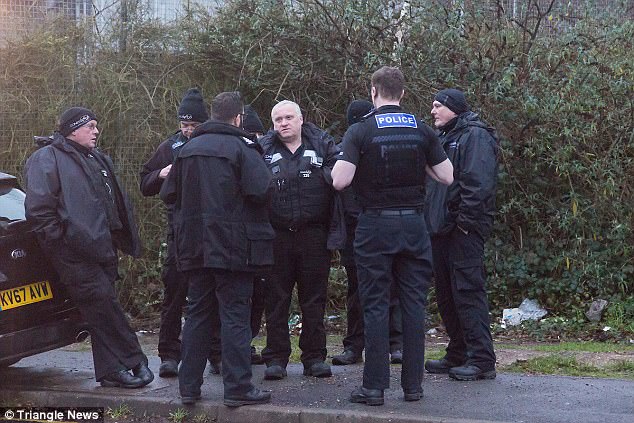 It is open to the public, with visitors able to book driving time on the circuit and take driving skills courses.

Lewis Hamilton has trained there while the track has also been used to set world records.

It lies close to the St George’s Hill development which is home to dozens of celebrities.

Presenting duo Eamonn Holmes and his wife Ruth Langsford, Michael Aspel, and Abbey Clancy and her husband Peter Crouch all have homes there.

Witnesses who work on the Brooklands Trading Estate, which backs onto land owned by Mercedes, said the caravans were first spotted on Friday morning.

One said they had lit fires outside to stay warm – and bizarrely all the men on site drove off on Friday morning in their vans to go to work.

She said: ‘To give them their due, they seem hard-working.

‘They went out to do house clearances and rubbish pick ups and then came back and burnt it all.

‘The place smelled rank. It looks like a total mess now. It’s horrific.’

The area occupied by the travellers is thought to be close to the famous track and they appear to have got in through some unsecured metal gates.

Officials were on site on Friday, putting up notices warning the trespassers they needed to move by Friday night. 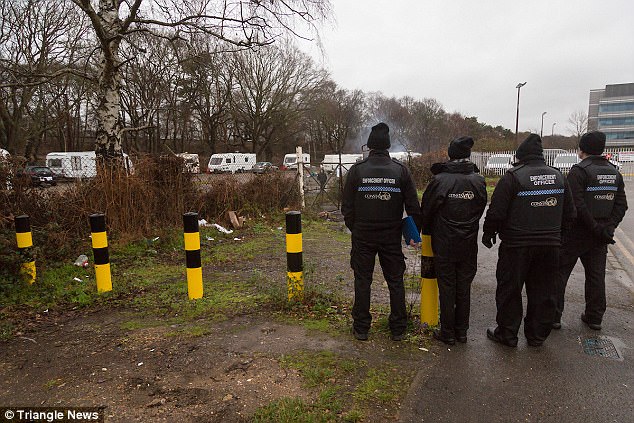 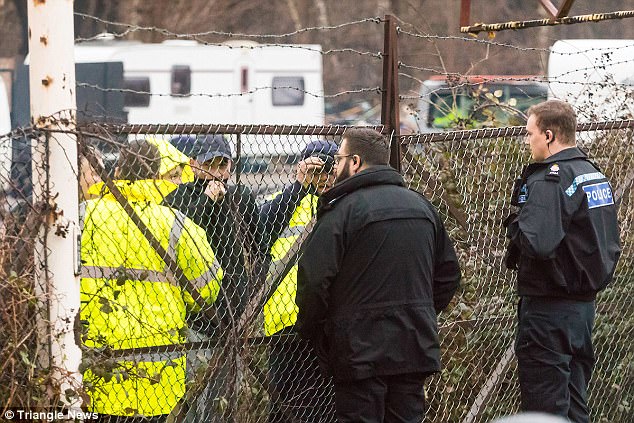 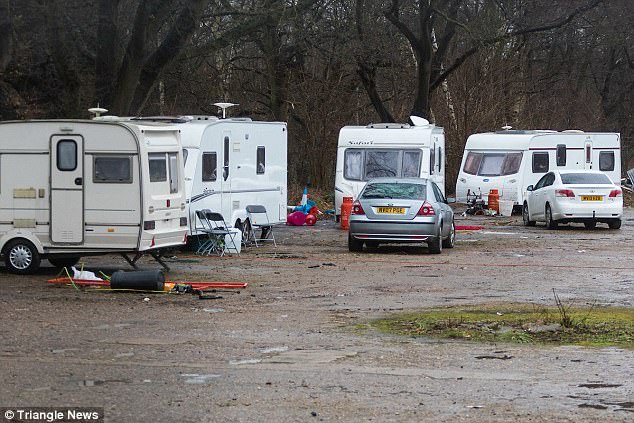 The camp had several caravans, cars and trucks parked on site after the travellers settled there

Signs read: ‘If you do not leave by 8pm on Friday 26th January 2018 together with all your belongings we will exercise our right of self help to remove you and have instructed Enforcement Officers from Constant and Company to do so on our behalf.’

Since 2015, AMG Driving Academy, the German high performance division of Mercedes-Benz, BASIC Training has been offered on the tracks at Mercedes-Benz World – the only place in the world to offer this course flexibly on any day of the year and with one to one coaching as standard.

The adjacent Brooklands Museum has a large collection of early motorcars, motorbikes and aeroplanes, including a Concorde.

Another witness said those working nearby had wondered what was going on.

She added: ‘There were suddenly just loads of people on this one site. There were whole families sitting around campfires.

‘They’ve been told to clear off, but why would you? It’s a great bit of land for them and there’s probably quite a bit of work nearby.

‘Weybridge is really posh though so I doubt they’ll be able to stay long.’

A spokeswoman for Mercedes-Benz World said the influx hadn’t affected public visits to the site.

She added: ‘I can confirm we are handling through the usual legal channels.’