Travellers say last sad goodbye to ‘Queen of the Gipsies’

Travellers paid a final farewell to the ‘Queen of the Gipsies’ on Wednesday as the final stones were laid to complete her elaborate grave.

Family and friends of Ruby Pearl Marshall, who died last year at the age of 78, gathered at a cemetery in Pontypridd to say a last goodbye.

The grave, which is understood to have cost £40,000, consists of a large black headstone with gold angels and four other black heart-shaped stones with messages from her four children etched into them.

Friends and family from the traveller community gathered in Pontypridd, Wales, on Wednesday to bid a final farewell to Ruby Pearl Marshall, known as Queen of the Gipsies, as her elaborate grave was completed 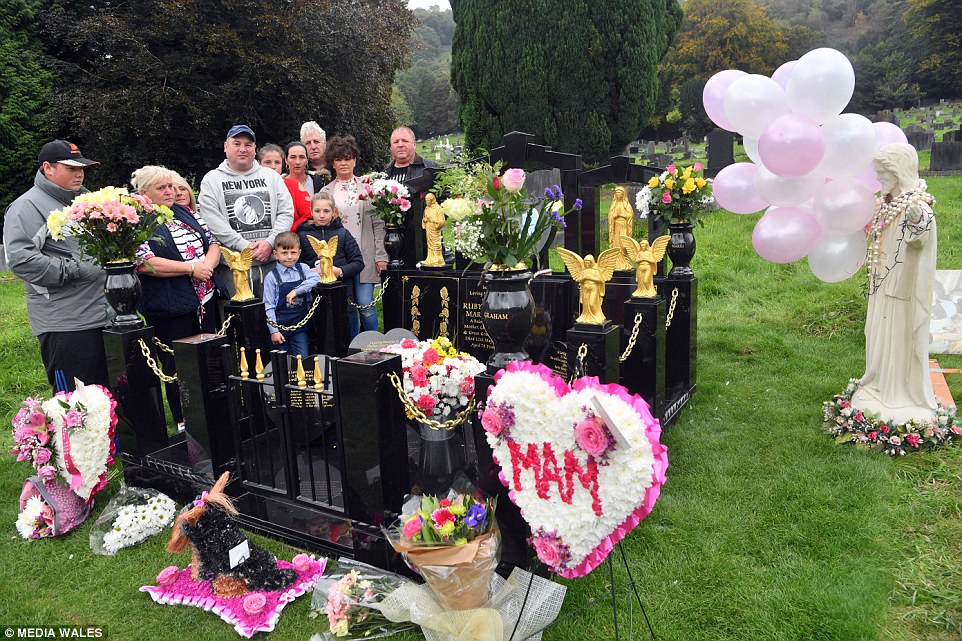 The tomb features a large headstone complete with a picture of her, flanked by golden angels and sitting above four stone hearts each containing an engraved message from her children. It is thought to have cost £40,000 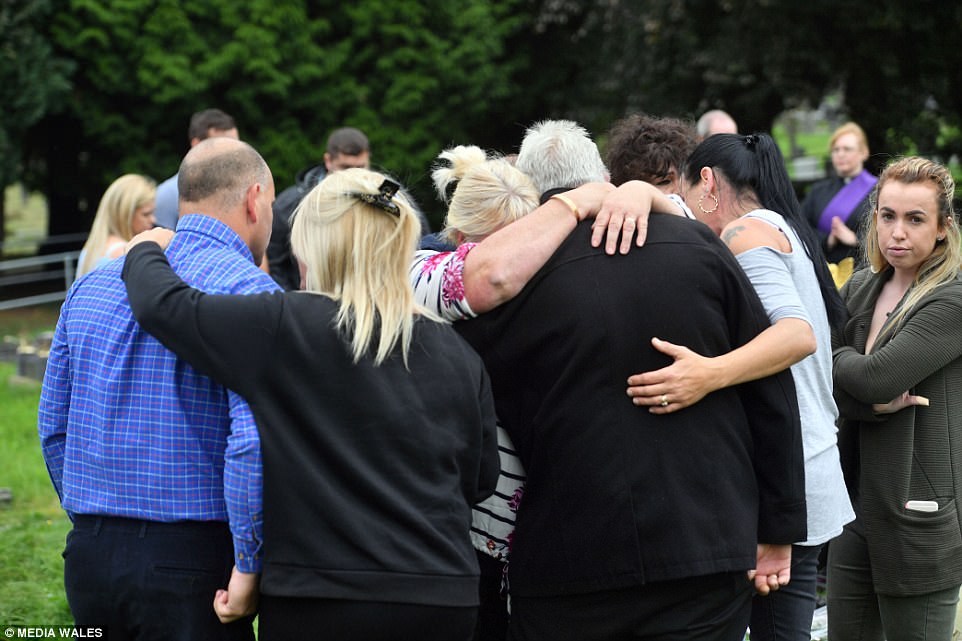 Mrs Marshall passed away last year at the age of 78, prompting an extravagant funeral procession, but Wednesday’s ceremony was quieter as people paid their final respects 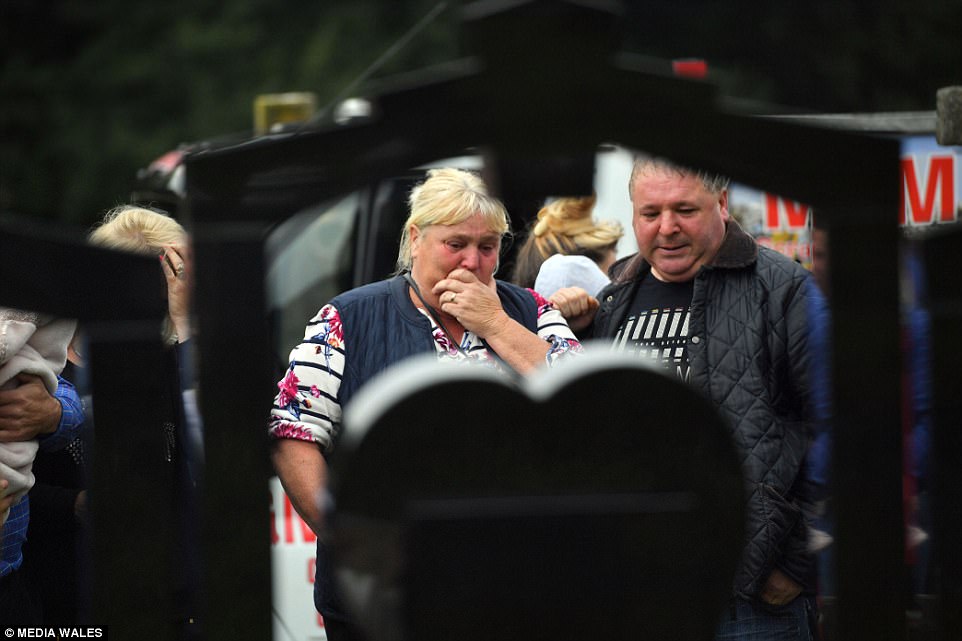 Whitney Houston’s I Will Always Love You, Jim Brickman’s A Mother’s Love and Westlife’s You Raise Me Up were all played as people paid their final respects

At the centre of the grave is a picture of Mrs Marshall with her Yorkshire Terrier, Freeway, and the headstone is dedicated to the ‘loving memory’ of a ‘beloved wife, mother, grandmother and great-grandmother’.

Pink and white balloons were placed at the side of the grave and a series of floral tributes, including one in the shape of a dog, were laid in front of it.

A short service was held at the cemetery which was led by Father Mark Prevett who carried out a blessing and described the grave as an ‘incredible piece of artwork’.

‘It’s a very fitting tribute to the life and the family of Ruby’, he said.

Music was then played from a nearby car including Whitney Houston’s I Will Always Love You, Jim Brickman’s A Mother’s Love and Westlife’s You Raise Me Up. 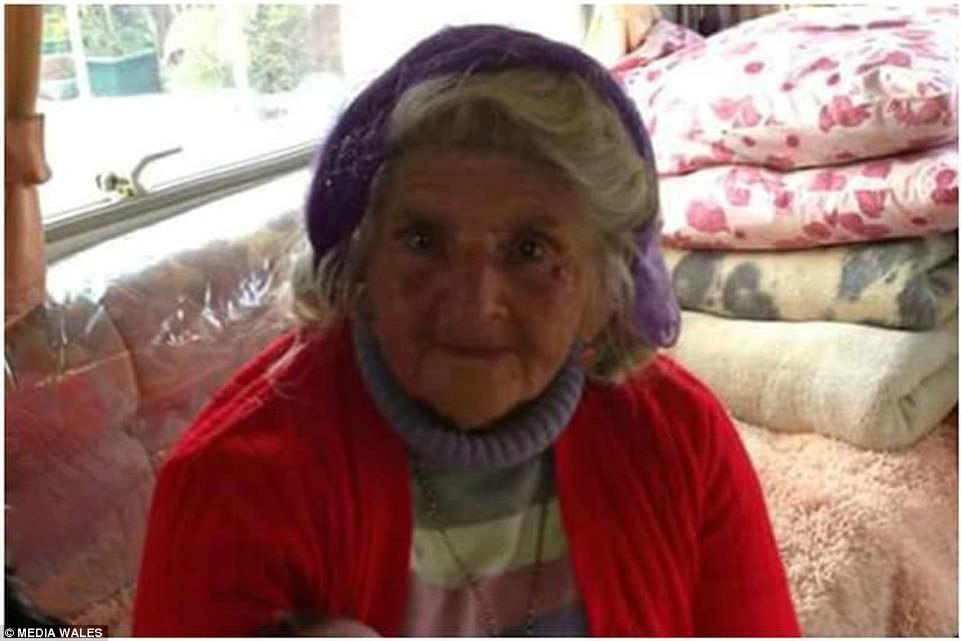 Mrs Marshall had four children and 48 grandchildren and was revered among the travelling community. The grave features a picture of her holding her Yorkshire Terrier, Freeway 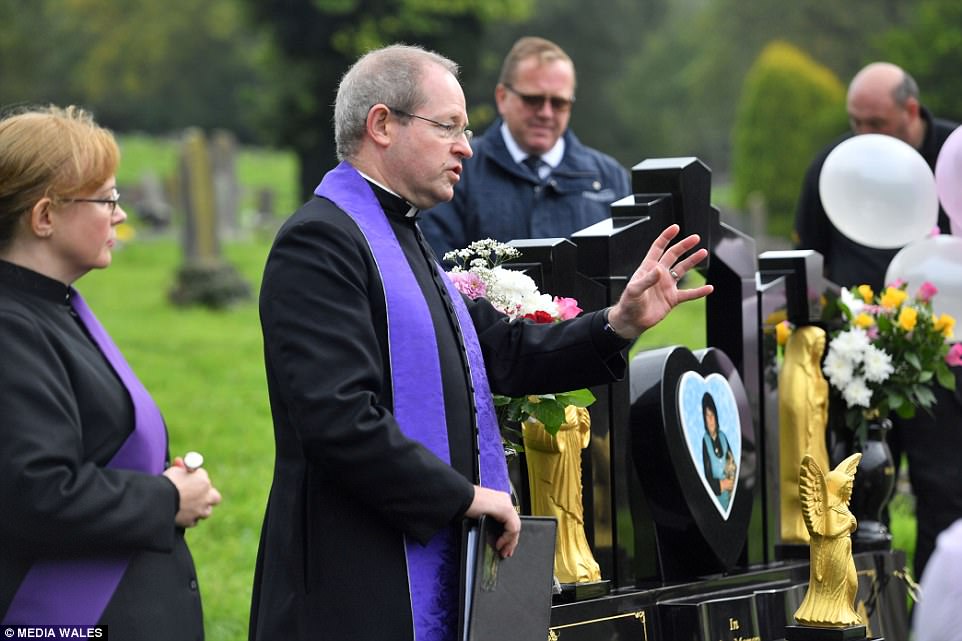 Father Mark Prevett led the ceremony, before praising the grave as an ‘incredible piece of artwork’ and a ‘fitting tribute’ 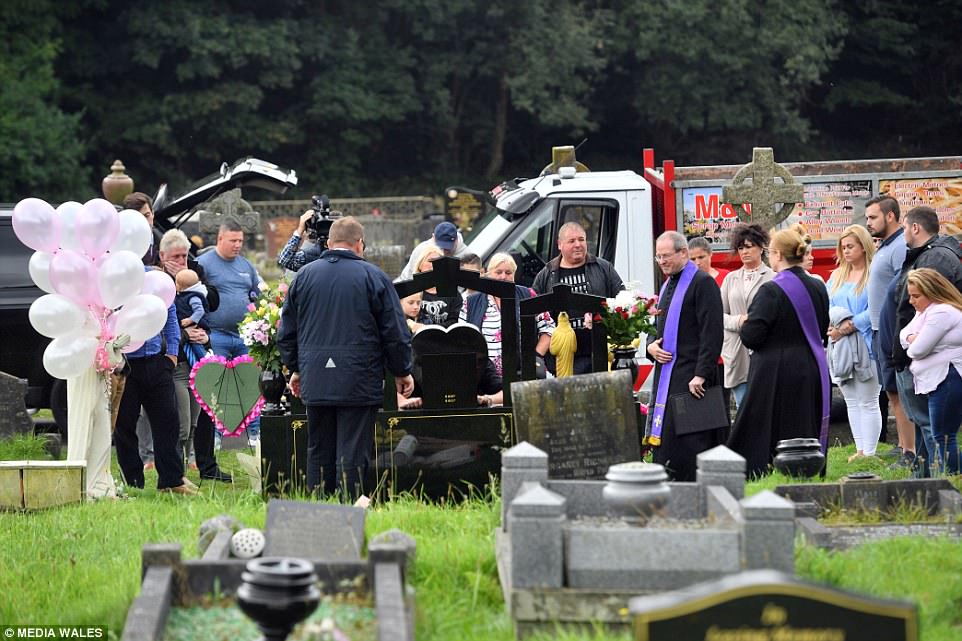 Mario, Mrs Marshall’s son, said the grave was a collaborative work between her children who sat down together before agreeing how they wanted it to look 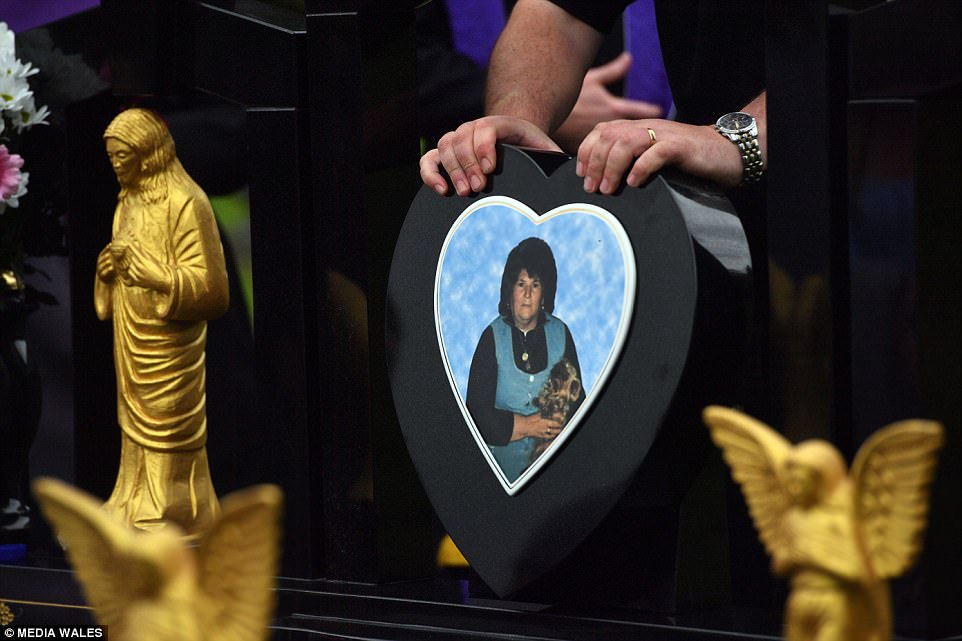 Mario said of his mother: ‘She gave us all the best through her life so we are trying to do exactly the same for her. The way I look at life is this. You’re not here forever, but you are missed forever’

Speaking after the service, Mrs Marshall’s son Mario said: ‘There’s not a lot you can say that hasn’t been said about her already.

‘She gave us all the best through her life so we are trying to do exactly the same for her. The way I look at life is this. You’re not here forever, but you are missed forever.

‘Ruby was a wonderful woman and we did all we could do for her, but it still wasn’t enough because she did so much for us.’

Speaking about her resting place, he said: ‘It looks as it does as we all got together and decided on the things we wanted on the grave.

‘We came here today because all of the family wanted to be here when the last piece of the stone was put on, and it was a truly lovely service in tribute to her.

‘The funeral directors have been very good all the way through and have done a marvellous job.’

Mrs Marshall’s funeral was held in May last year and involved a cortege of 11 limousines and white horses with pink and purple feathers as her pink and white coffin was taken to the cemetery from her home at Glynmill Caravan Site. 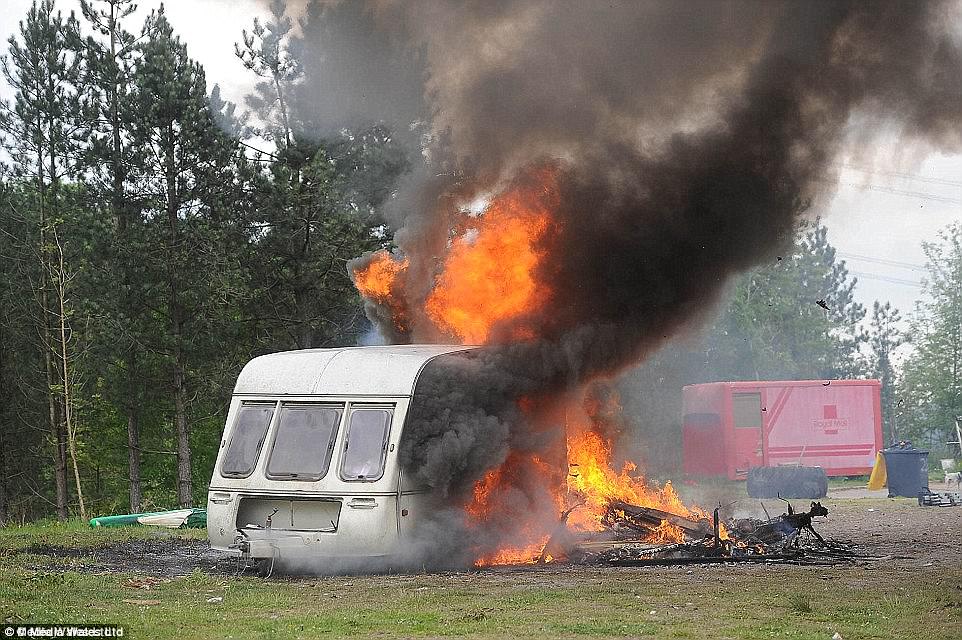 As part of her funeral, Mrs Marshall’s caravan was burned along with all of her possessions 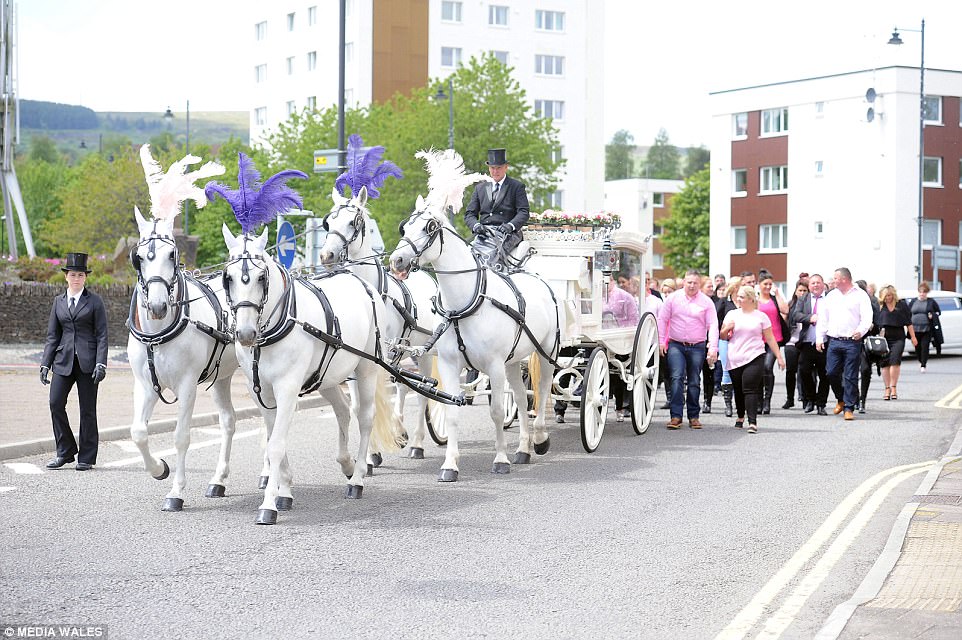 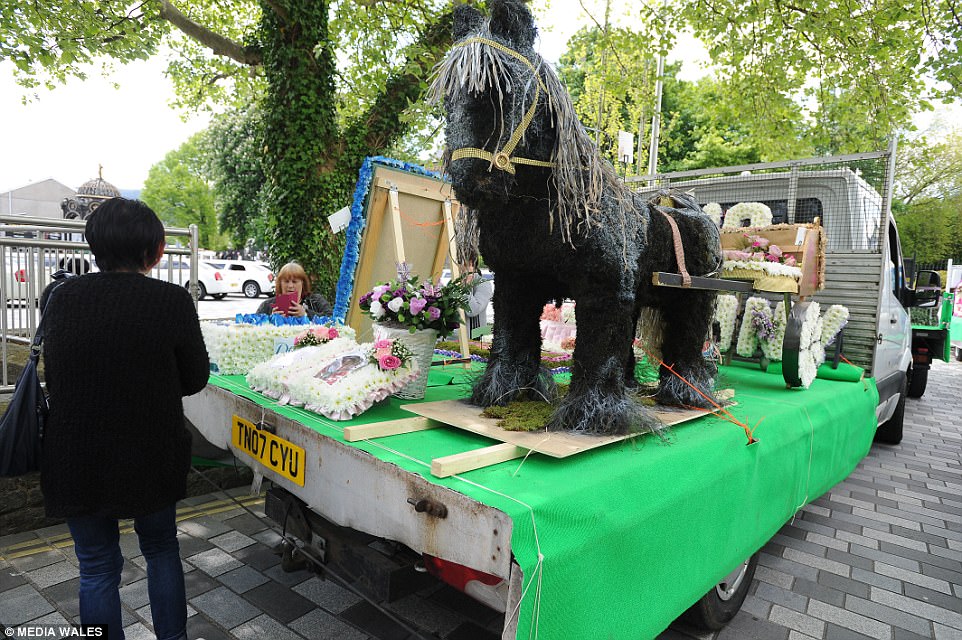 Floral tributes included a horse and trap, images of Mrs Marshall, and one in the shape of a dog 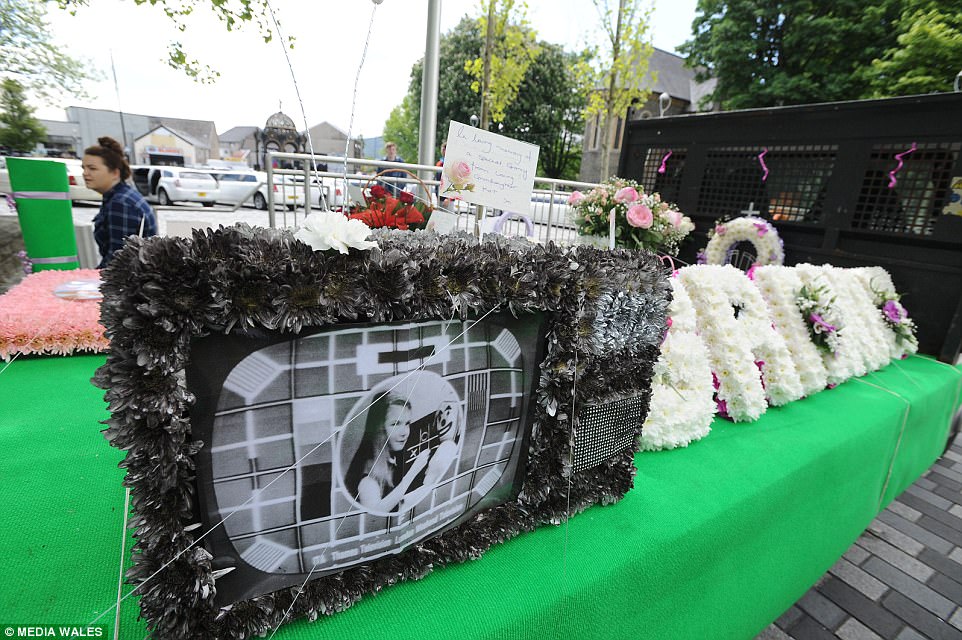 A television set, complete with a test card on the screen, was among the flower arrangements for her funeral last year 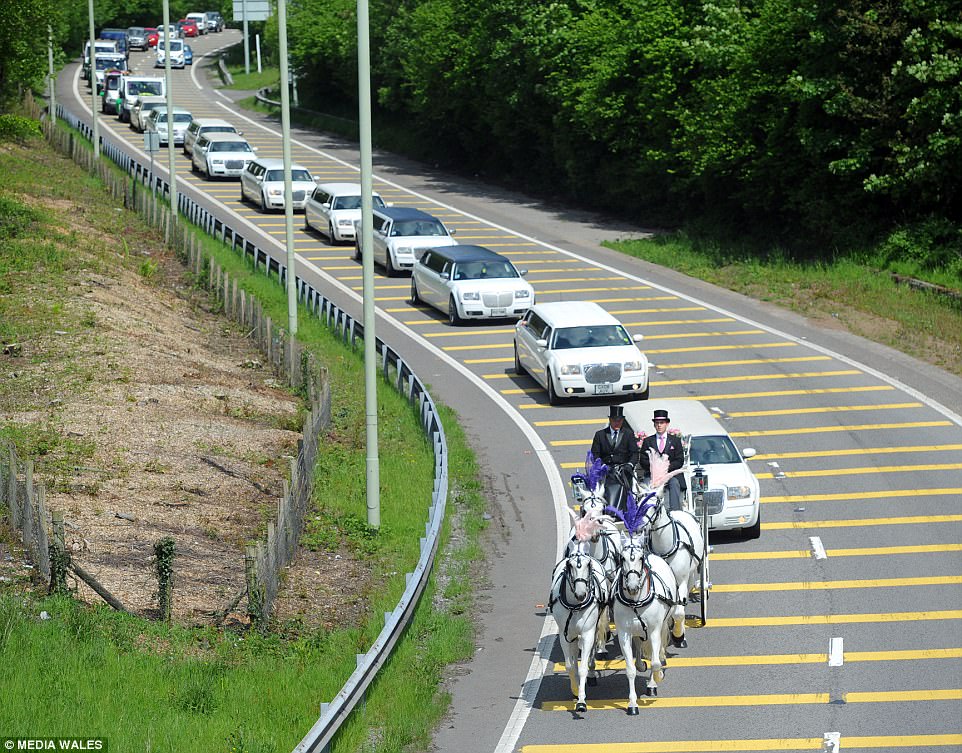