Treasurer Josh Frydenberg is to be tested for coronavirus

Josh Frydenberg has been tested for coronavirus after having a coughing fit in parliament.

Mid-way though a speech on the economic impact of the virus, the federal treasurer started coughing and had to pause to drink water.

He tried to resume speaking but began coughing again and more sips of water did little to help.

The fit lasted for around two minutes before he battled through the rest of the speech.

In a statement, Mr Frydenberg said he had a ‘dry mouth’ and a cough and got tested out of ‘an abundance of caution’ on the advice of the deputy chief medical officer.

He will self-isolate until the test comes back tomorrow.

‘Today while delivering my ministerial statement I had a dry mouth and a cough,’ the statement read.

‘After question time I sought the advice of the Deputy Chief Medical Officer (DCMO).

‘The DCMO advised me that out of an abundance of caution it was prudent I be tested for COVID-19.

‘Following the receipt of his advice I immediately left Parliament House to be tested and will await the result in isolation.

‘I expect the result of my test to be provided tomorrow.’ 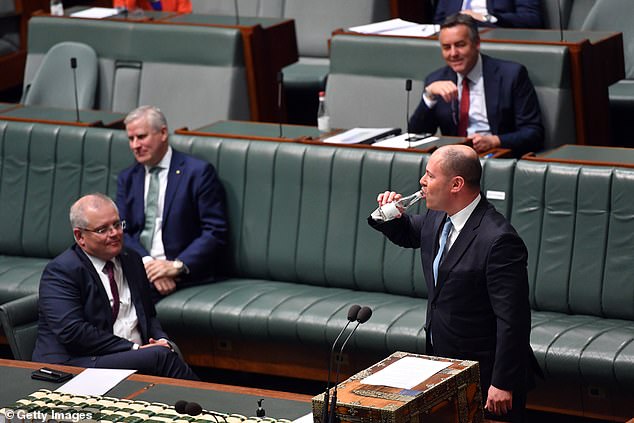 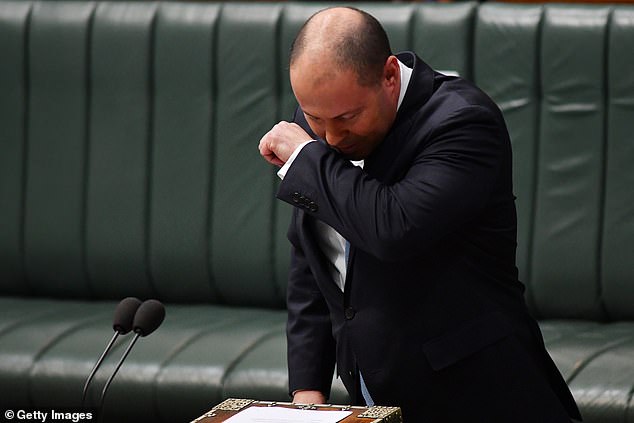 In a statement, the treasurer said he had a ‘dry mouth’ and a cough and is going to get tested out of ‘an abundance of caution’ on the advice of the deputy chief medical officer

In his speech, Mr Frydenberg warned Australia faces a bleak economic future with unemployment hitting 10 per cent in June.

The $50billion loss is equivalent to the total quarterly production of South Australia, Tasmania, the Northern Territory and the ACT, the treasurer told parliament today. 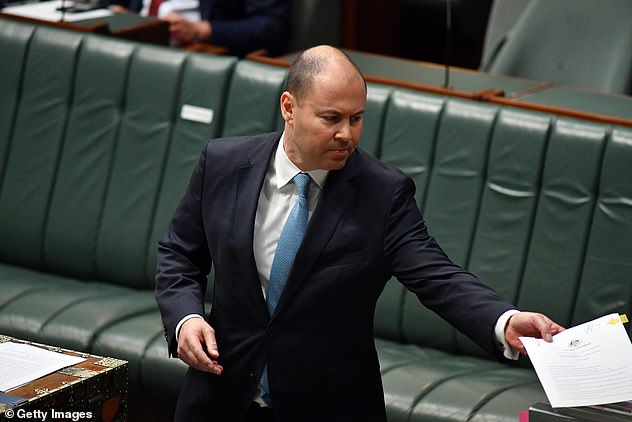 Furthermore, household spending is expected to be 16 per cent down in the June quarter, with business investment down 18 per cent.

‘The combination of social distancing, lower incomes, and increased uncertainty are weighing heavily on aggregate demand and flowing through to reduced cashflow,’ the treasurer said.

Mr Frydenberg said the economic data has been ‘sobering’.

GDP to drop !0% in biggest fall ever

‘In March, business and consumer confidence saw the largest declines on record and the ASX 200 lost more than a third of its value in just over four weeks,’ he said.

‘In April, surveys showed that job ads halved and activity in the construction, manufacturing and the services sector had their largest ever monthly falls.

‘New motor vehicle sales fell by 48 per cent through the year, their largest ever fall.

‘House sales fell by 40 per cent. Domestic and international air travel is down by more than 97 per cent.’

‘Between the 14 March and 18 April, the number of jobs decreased by 7.5 per cent,’ the treasurer added.

‘And the wages bill paid by businesses decreased by 8.2 per cent. During this period, accommodation and food services saw the largest fall in jobs at 33.4 per cent, followed by the arts and recreation sector at 27 per cent,’ the treasurer said.

Despite the stark figures, Mr Frydenberg said there was reason to hope. 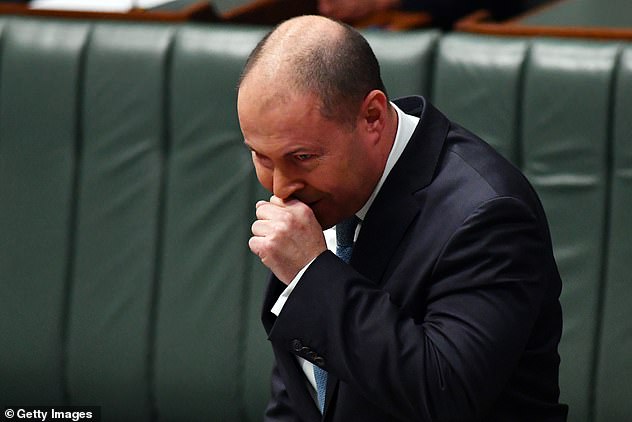 Mr Frydenberg, who paused for a minute to deal with an aggressive coughing fit, said the economic data has been ‘sobering’

The treasury estimates that the lifting of restrictions by July get 850,000 back to work.

More than half of those workers will come from hospitality, the arts and transport, postal and warehousing services.

‘Construction with 45,000 jobs and manufacturing with 20,000 jobs will also be significant contributors,’ the treasurer said.

The relaxation of travel restrictions: $700 million

Concluding, the treasurer said: ‘We can be confident about our future. This virus will not defeat us. We must stay strong. We must stay together. We must maintain our resolve.

‘The fighting Australian spirit will see us come through stronger than ever.’

Deloitte Access Economics is predicting the budget deficit will be the biggest as a share of the economy since World War II.

It is predicting a $143billion budget deficit for 2019-20, representing a huge 7.3 per cent of gross domestic product.

Only a year ago, Mr Frydenberg had promised a $7.1billion budget surplus for this financial year, a month before the May election.

Treasury shrunk that surplus to $5billion in December 2019 – weeks before China belatedly confirmed the first cases of coronavirus in Wuhan.

The following financial year will also be expensive with Deloitte Access Economics forecasting a $132billion deficit for 2020-21, making up 7.2 per cent of GDP.