One of Australia’s most senior public servants has revealed the nation’s true unemployment rate stands at 15 per cent.

Treasury secretary Dr Steven Kennedy has confirmed Australia’s actual jobless rate was at a level unseen since the 1930s Great Depression – when those receiving JobKeeper wage subsidies were considered to be unemployed.

‘I’m more inclined to be thinking about even the 15 per cent when you’re thinking about the effect JobKeeper is having,’ he told a Senate COVID-19 committee on Thursday.

Dr Kennedy told Labor frontbencher Katy Gallagher 15 per cent or 2million people among Australia’s working age population were ‘not working’ when 720,000 JobKeeper recipients were reclassified as being without employment.

One of Australia’s most senior public servants has revealed the nation’s true unemployment rate stands at 15 per cent. Pictured is a Centrelink queue in Melbourne on April 20, 2020

The Australian Bureau of Statistics classifies these people as employed even though they aren’t actually working, as they receive their $750 a week coronavirus wage subsidy to stay home.

‘This is the benefit of JobKeeper. To have that number still attached to their employer, terrible that they’re not working, terrible outcome but from a policy perspective – the policies are designed to see as much attachment between employers and employees,’ Dr Kennedy said.

His confirmation shows Australia has a worse unemployment crisis than the official figures suggest.

The jobless rate in April rose by one percentage point to 6.2 per cent the highest since September 2015 as a result of the COVID-19 shutdowns.

Like the Reserve Bank of Australia, Treasury is expecting the official jobless rate to hit 10 per cent by June, the highest since April 1994.

The ABS regards 823,300 people as being officially unemployed where they are on JobSeeker and are actively searching for work as they receive $1,115.70 a fortnight with a temporary, six-month $550 coronavirus supplement.

Last month, 489,800 also left the labour force in despair at being unable to find employment and didn’t necessarily go on the dole. 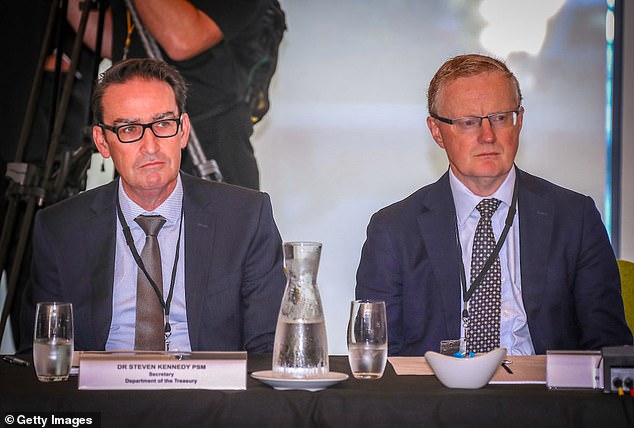 Treasury secretary Dr Steven Kennedy (left) has confirmed Australia’s actual jobless rate was at a level unseen since the 1930s Great Depression – when those receiving JobKeeper wage subsidies were considered to be unemployed. Like Reserve Bank of Australia governor Philip Lowe (right), he is expecting the official jobless rate to hit 10 per cent by June 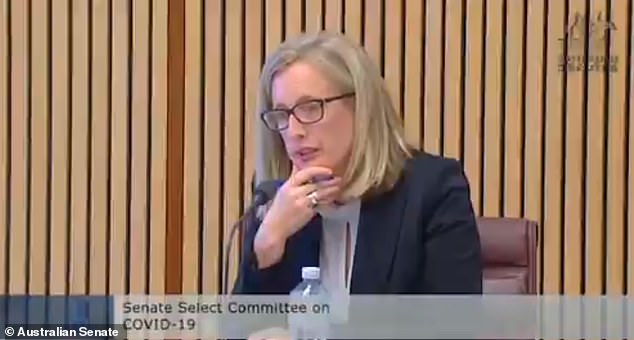 Treasury secretary Steven Kennedy told Labor frontbencher Katy Gallagher (pictured) 15 per cent of or 2million people among Australia’s working age population were ‘not working’ when 720,000 JobKeeper recipients were reclassified as being without employment

This means 1.3million people don’t have a job, whether they are searching for one or have given up trying to.

Unemployment through the ages

It peaked at 11.2 per cent in December 1992, at levels unseen since the 1930s Great Depression, even though the recession had ended in June 1991

Unemployment remained in the double digits until April 1994

Australia also had a jobless rate above 10 per cent in 1983, even after a year-long recession had ended

During the global financial crisis, unemployment peaked at 5.9 per cent in June 2009, following a $42billion stimulus package that gave out $900 to everyone earning less than $100,000 a year

So far, however, the scheme has subsidised the wages of 720,000 workers.

This means 2million Australians either don’t have a job or are being paid $1,500 a fortnight by taxpayers.

The $130billion JobKeeper program was announced on March 30, as part of a third stimulus package.

It was designed to cover six million workers, or half of the Australian labour market.

To be eligible, affected businesses had to have suffered a 30 per cent turnover plunge since March.

This package was unveiled a week after the federal government shut down non-essential businesses, from pubs and clubs to gyms and cinemas, in bid to slow the spread of COVID-19.

Cafes and restaurants were restricted to takeaway food but since May 15, they have been allowed to have 10 dine-in customers at tables in New South Wales. 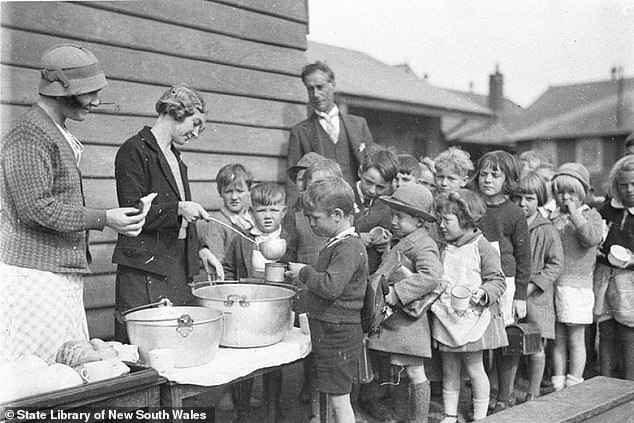 Australia hasn’t had a 15 per cent unemployment rate since the 1930s Great Depression. Pictured are schoolchildren in New South Wales in 1932

Even on the official figures, a handful of places in Australia now have double-digit unemployment.

Toowoomba, west of Brisbane, saw its jobless rate surge from 7.2 per cent in March to 12.2 per cent in April, a CommSec analysis of ABS data showed.

Brisbane’s inner-city saw its unemployment level soar from five per cent to nine per cent as the jobless level in the Queensland capital’s eastern suburbs rose from 6.4 per cent to 9.8 per cent.

The New South Wales Mid-North Coast saw its jobless pace climb from 8.9 per cent to 11.8 per cent.

Demographer Mark McCrindle said many capital city centre cafes would close when the JobKeeper subsidy ran out on September 27.

‘A lot of employees across the board who are being sustained by that will find that the job will not be not be feasible when it’s funded by the employer,’ he told Daily Mail Australia.

‘If we think about our CBDs, even when we do come back at the end of this year, they’re probably going to be running at least 10 per cent fewer staff, maybe 20 per cent. 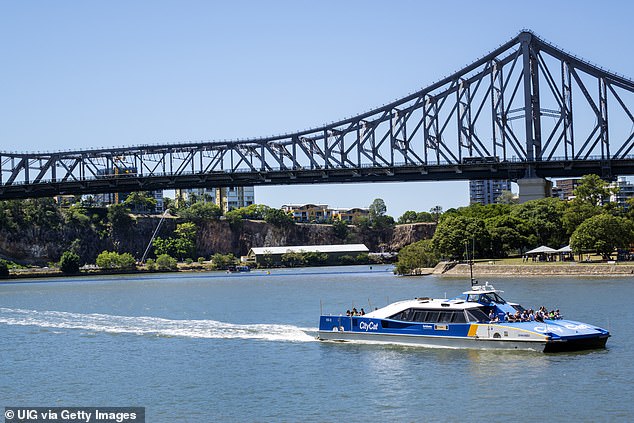 Brisbane’s inner-city (New Farm and Kangaroo Point pictured on either side of the Story Bridge) saw its unemployment level soar from five per cent to nine per cent as the jobless level in the Queensland capital’s eastern suburbs rose from 6.4 per cent to 9.8 per cent

‘If you’ve got one-fifth of more of the foot traffic that normally would be there not there, that’s going to massively impact on those eateries and cafes.’

COVID-19 labour market at a glance

Underemployment soared by 4.9 percentage points to record 13.7 per cent

Tally of underemployed Australians surged by 603,300 to 1.8million

Participation rate plunged by an unprecedented 2.4 percentage points to 63.5 per cent

‘You’ve got to look at where the jobs are being lost and the workforce has taken an absolutely phenomenal hit in the last few weeks,’ he told Daily Mail Australia.

‘Private sector investment plans are being cut back; unless the public sector steps in, we’re looking for years and years of relatively jobless growth.

‘It will be very difficult to get out of that unless the public sector played a direct and leading role.’

Professor Buchanan said the level of underemployment was likely to be double the official unemployment rate for years to come.

‘Underemployment is the big story,’ he said.

‘Before the downturn it was sitting at 15 per cent, it’s now gone up to about 20 per cent and I would predict the ratio of unemployed to underemployed would be roughly two to one.’

Underemployment soared by 4.9 percentage points to record 13.7 per cent as working hours fell 9.2 per cent.