Trendy ‘forest bathing’ really may be good for your health, research suggests.

The Duchess of Cambridge is reportedly a fan of the Japanese practice of walking slowly and thoughtfully through woodlands.

And now a study has found people are healthier and happier if they spend at least two hours a week in nature.

Researchers believe relaxing in a park, beach or forest gives us ‘perspective on life’, while also reducing stress.

They say 120 minutes a week is a ‘realistic target’ for most, particularly when it can be broken up into several short visits over the seven days.

The Duchess of Cambridge is pictured laughing with the landscape architects Andree Davies and Adam White. The three co-designed the Royal Horticultural Society’s Back To Nature Garden, which was open to the public at this year’s Chelsea Flower Show 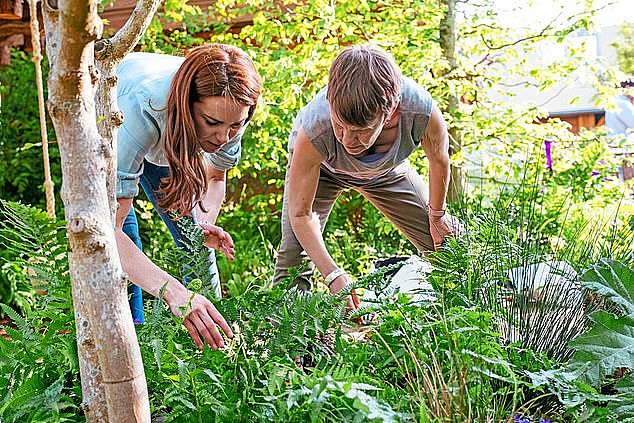 The research was carried out by the University of Exeter and led by Dr Mathew White, an environmental psychologist and senior lecturer at the college of medicine and health.

‘It’s well known that getting outdoors in nature can be good for people’s health and wellbeing but until now we’ve not been able to say how much is enough,’ Dr White said.

‘The majority of nature visits in this research took place within just two miles of home so even visiting local urban green spaces seems to be a good thing.

‘Two hours a week is hopefully a realistic target for many people, especially given that it can be spread over an entire week to get the benefit.’

Forest bathing is reportedly even said to have inspired the garden the Duchess co-designed at this year’s Chelsea Flower Show.

The Duchess, mother to Prince George, five, Princess Charlotte, four, and Prince Louis, one, wanted her Chelsea garden to be a playground for children to escape into, while also being a space for grown-ups.

Along with the landscape architects Andree Davies and Adam White, who co-designed her garden, the Duchess hoped incorporating elements of forest bathing would help visitors recharge their batteries.

WHAT IS FOREST BATHING?

Forest bathing describes the Japanese practice of walking slowly and thoughtfully through woodlands.

The Duchess of Cambridge is reportedly a fan, with the practice being the inspiration behind her Back To Nature Garden at 2019’s Chelsea Flower Show.

The idea is to take in everything around you, including the forest’s smells, sounds, sights and textures.

Studies show our blood pressure, heart rate, mood and even immune function can all be improved by spending some quiet time in forested areas.

In Japan, where rates of heart disease are among the lowest in the world, forest bathing, or shinrin-yoku, is a vital part of their national health programme.

One theory suggests the organic compounds phytoncides, which trees emit to protect themselves from parasites and disease, could benefit humans.

Forest bathing may also calm people by giving them focus and removing them from the stresses of modern life.

Popstar Justin Bieber and Hollywood’s resident ‘health expert’ Gwyneth Paltrow were early adopters of the practice in the Western world.

And now both the Forestry Commission and the RSPB conservation charity offer forest bathing sessions on their land.

Forest-bathing sessions are also popping up at spas and health retreats all over the country.

‘The Duchess suggested this,’ Mr White said. ‘The challenge was to create an immersive experience, for visitors to feel like they are in the middle of a woodland, so that everyone gets their own little nature fix.’

Living in ‘green’ areas has been shown to be good for our health, however, it was unclear how much time we should spend in natural environments.

To better understand this, the researchers embarked on the biggest study of its kind.

They analysed two-year’s worth of data from more than 20,000 people who took part in the Natural England’s Monitor of Engagement with the Natural Environment Survey.

Results – published in the journal Scientific Reports – revealed those who spent at least two hours a week in nature were more likely to report being in good health.

This is compared to those who did not venture into the great outdoors at all on a typical week.

And it did not matter whether the two hours was achieved in one burst or broken up into several short visits.

‘You could go for a walk for two hours on a Sunday or you could go for four lots of 30 minute [walks] during lunchtimes during the week,’ Dr White said.

But visiting parks, woodlands or beaches for less than 120 minutes a week does not reap any benefits, the research suggests.

‘Doing 60 or 90 minutes didn’t seem to have the same benefits at all,’ Dr White said. ‘It really needed to be at least two hours a week.’

The results applied to both men and women, as well as across adults of all ages, occupations and ethnicities.

‘What really amazed was this was true for just about every group we could think of,’ Dr White said.

Even those with chronic illnesses or disabilities benefited from time in the great outdoors.

‘It doesn’t have to be physical exercise,’ Mr White said. ‘It could just be sitting on a bench’.

Co-author Professor Terry Hartig, of the institute for housing and urban research at Uppsala University, added: ‘There are many reasons why spending time in nature may be good for health and wellbeing.

‘[These include] getting perspective on life circumstances, reducing stress, and enjoying quality time with friends and family.

‘The findings offer valuable support to health practitioners in making recommendations about spending time in nature to promote basic health and wellbeing, similar to guidelines for weekly physical’.

Dr White stresses, however, the two-year study was just a ‘snapshot in time’.

The scientists are therefore working alongside the BBC’s Trust Me I’m A Doctor team on an experiment where people spend different amounts of time in nature each week.

How this affects their health and wellbeing will be released towards the end of this year, Dr White added.