Tropical Storm Isaias officially formed late Wednesday drenching the south of Puerto Rico with heavy rains as it spirals towards Hispaniola with a threat of flooding and landslides.

The U.S. National Hurricane Center in Miami said the storm was expected to cross the Dominican Republican and Haiti, which share Hispaniola, by early Thursday and the southeastern Bahamas by early Friday.

It’s following a path that could take it to the U.S. mainland by the weekend.

The storm carries the threat of three to ten inches of rain in some areas of Hispaniola before spiraling towards Florida and the eastern U.S. 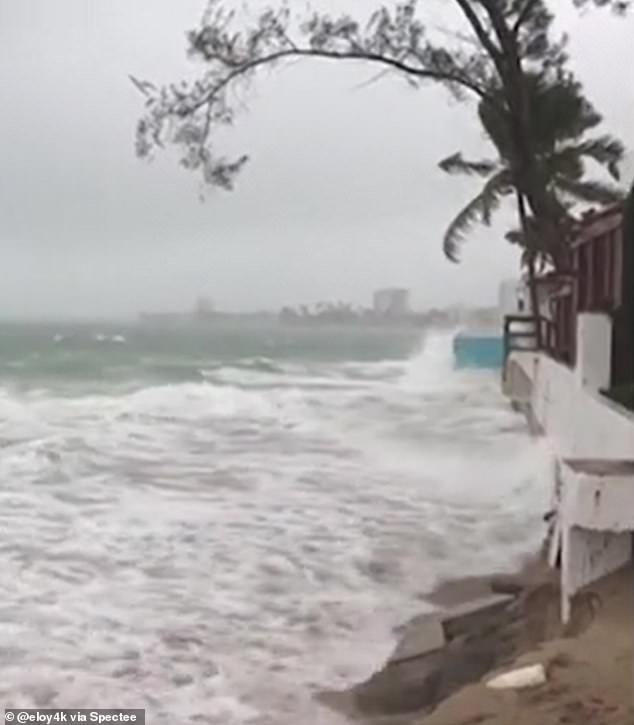 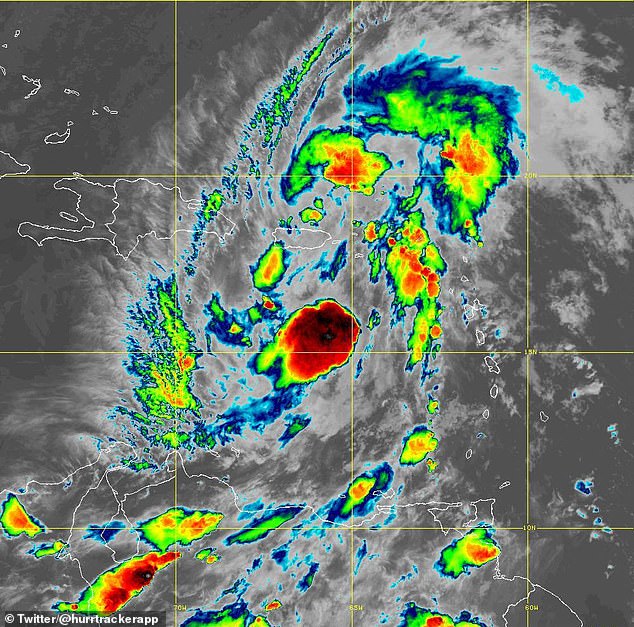 By Wednesday evening it was already beating the Virgin Islands and the Caribbean with thunderstorms and whipping winds.

On Tuesday afternoon into Wednesday night Puerto Rico suffered a massive power outage affected at least 400,000 customers throughout the island, hours ahead of the storm’s approach. By Wednesday evening 96,000 customers were without electricity.

The outage came as the Federal Emergency Management Agency claimed Puerto Rico was not prepared to respond to a ‘major event’ on top of a rising number of COVID-19 cases.

‘I don’t want people to lower their guards, because this system is quite dangerous,’ Ernesto Morales with the U.S. National Weather Service in San Juan said. ‘This is not (Hurricane) Maria, but it will bring a lot of rain.’

The hurricane center said the storm was expected to swirl over Hispaniola and then pass between the eastern coast of Cuba and the southeastern Bahamas on Friday. 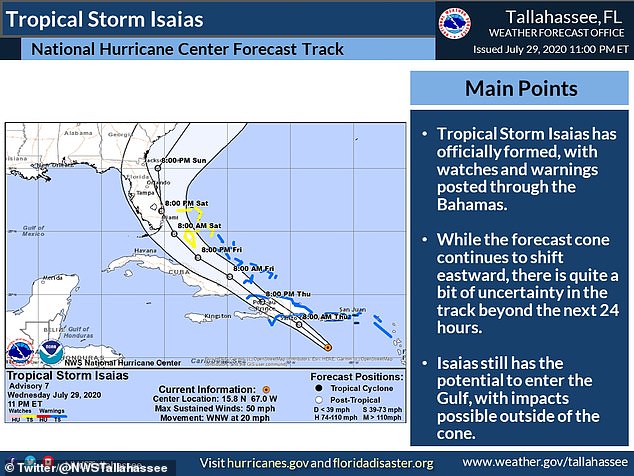 The trajectory of the storm shows it will cross the Dominican Republican and Haiti, which share Hispaniola, by early Thursday and the southeastern Bahamas by early Friday

It then could cross through the central Bahamas on Saturday and possibly move on to southern Florida and the Carolinas, but the center said it was too early to predict the path that far, saying there is ‘large uncertainty after it leaves the Caribbean.’

Forecasters warned that Isaias could drop three to six inches of rain, with up to 10 inches in isolated spots.

Puerto Rico is particularly vulnerable in the face of the incoming storm, with officials expressing concerns about the potential for landslides and flooding. 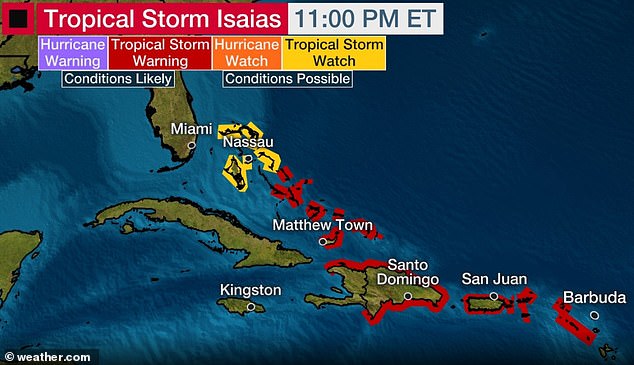 As of Wednesday evening much of the Caribbean including the Dominican Republic, Puerto Rico and the Virgin Islands are under a Tropical Storm warning or watch 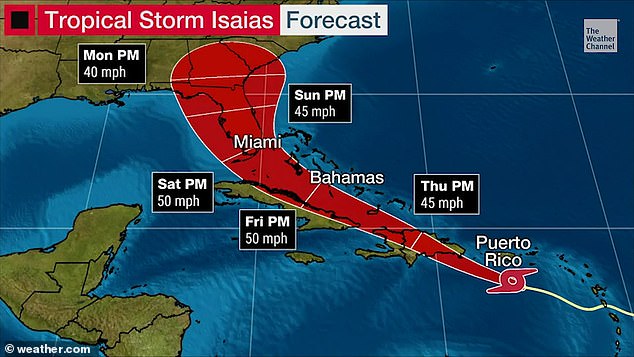 The storm could make it to mainland US by the weekend, reaching Florida on Saturday and spiraling upwards into Sunday 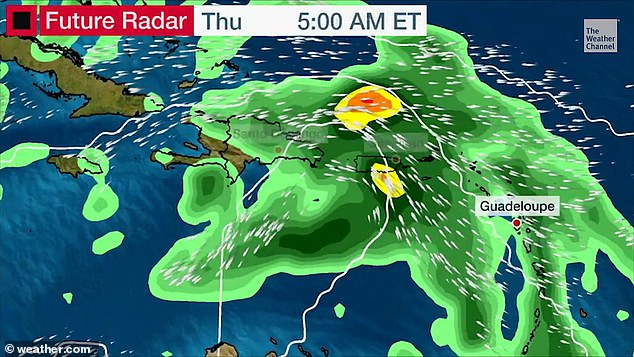 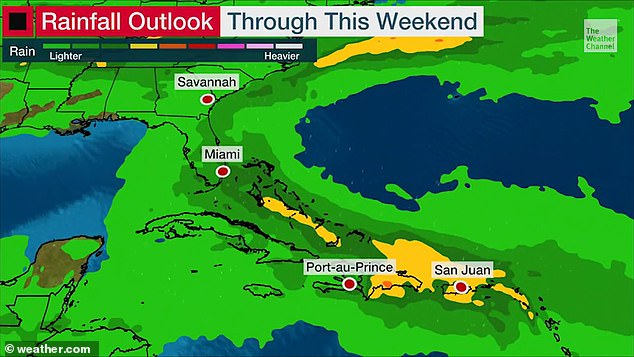 A rainfall outlook for the weekend shows extremely heavy rain will pound the Caribbean islands, Florida and up the East Coast

The US territory is also strugging with a spike in COVID-19 cases with more than 16,000 cases reported and over 200 deaths so far.

The island is also still reeling from the after effects of 2017’s devastating Hurricane Maria and a string of earthquakes earlier this year that damaged or destroyed hundreds of homes in the island’s south.

Puerto Rico’s power grid was destroyed by Maria and the rebuilt system is fragile and susceptible to failures, as experienced this week.

The Tuesday and Wednesday outage seemed to be related to a problem in a transmission line that connects both to natural gas power plant EcoEléctrica and Costa Sur, one of PREPA’s main power stations, according to the Miami Herald.

Officials said more than 300 shelters across the island were prepared to receive people if needed and that more than 130,000 face masks were available. 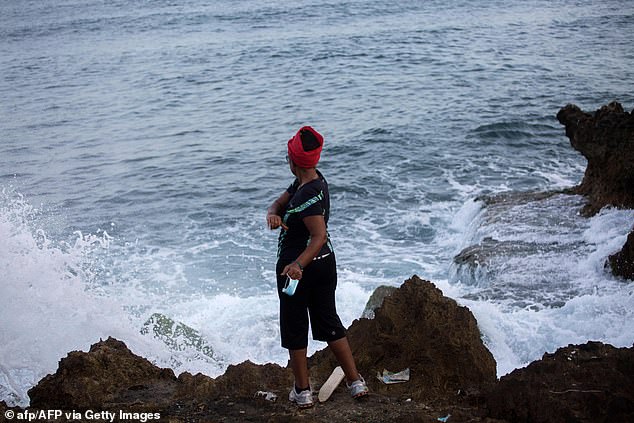 A woman fishes at the Santo Domingo promenade, in Dominican Republic on Wednesday as Tropical Storm Isaias gained traction not so far away 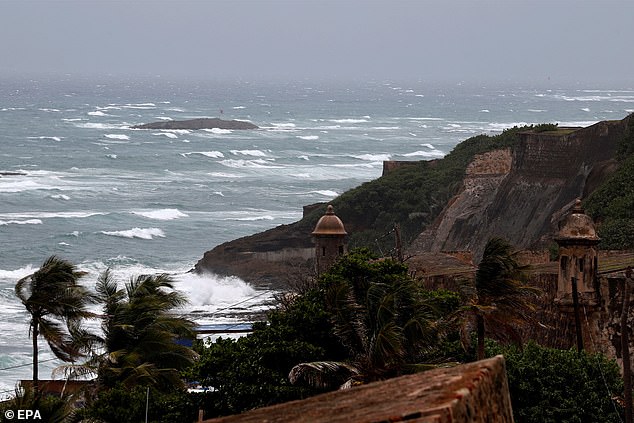 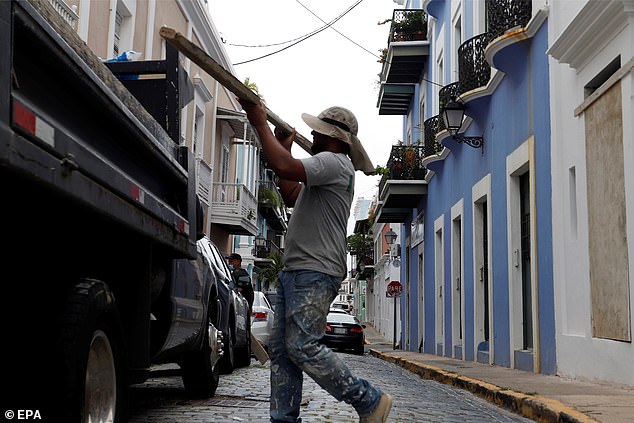 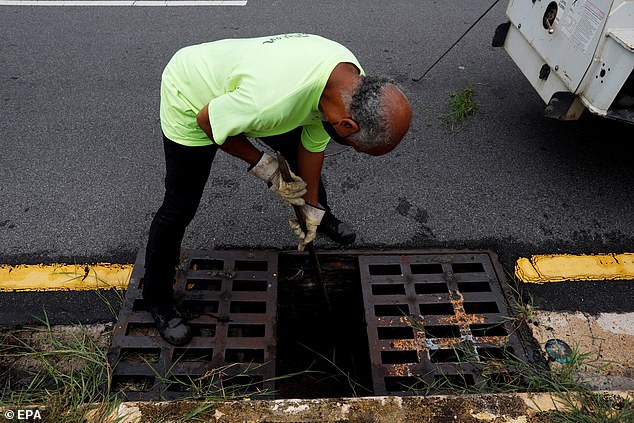 A worker cleans the sewers before the arrival of Tropical Storm Isaias in San Juan, Puerto Rico on Wednesday 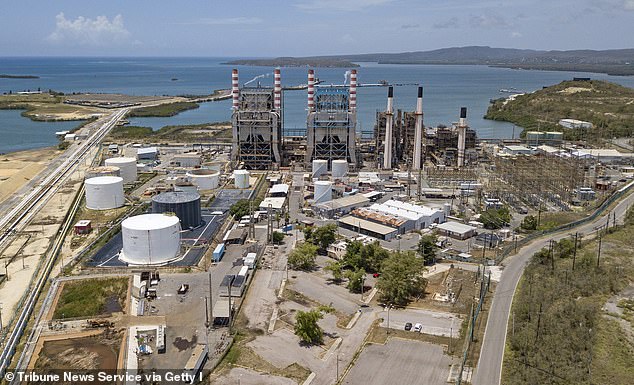 The Tuesday and Wednesday outage seemed to be related to a problem in a transmission line that connects both to natural gas power plant EcoEléctrica and Costa Sur, one of PREPA’s main power stations, according to the Miami Herald. The Costa Sur Power Plant Complex in Guayanilla pictured above in August 2018

As Isaias spirals with strength the US is now bracing for the storm.

The National Hurricane Center projected the storm’s path shows the system could be located near or on either side of the Florida Peninsula by the weekend and gradually head northeast.

However, the trajectory of the storm could change as it passes through mountainous terrain of Hispaniola, long known as a hurricane shredder with mountains up to 10,000 feet elevation, which could slow the storm or break it altogether.

Isaias is the ninth named storm system of the 2020 Atlantic hurricane season.