The president’s comments come on the heels of another night of violence in the United States, as two police officers in Louisville, Kentucky were shot during demonstrations after a Kentucky grand jury brought no charges against Louisville police for Breonna Taylor’s death.

‘Biden’s anti-police crusade must stop,’ the president demanded. ‘I will always stand with the heroes of law enforcement.’

Trump described the Democratic ex-vice president as being ‘weak as hell.’

‘He surrendered his party to flag burners, rioters and anti-police radicals,’ the president said.

But then accused Biden of backing the unrest.

‘Joe, they’re not peaceful!’ Trump yelled. ‘I think he believes it,’ the president smirked.

Biden has condemned violence and destruction related to this summer’s Black Lives Matter protests getting out of control.

Biden tweeted Wednesday, ‘Even amidst the profound grief & anger today’s decision generated, violence is never & can never be the answer.’

‘Those who engage in it must be held accountable,’ he said.

‘Jill & I are keeping the officers shot tonight in Louisville in our prayers. We wish them both a swift & full recovery,’ Biden added. 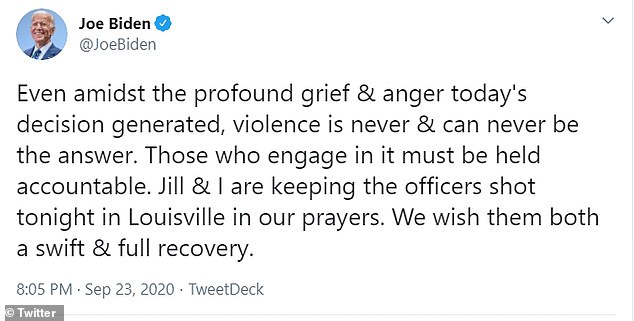 While Trump claimed Biden was on an ‘anti-police crusade,’ the Democratic nominee tweeted Wednesday night taht ‘violence is and never can be the answer.’ Biden added that the two officers shot were in his and wife Jill’s prayers

But Trump continued to say that he was candidate of law enforcement, while Biden was the candidate of Black Lives Matter – portraying the broader movement as violent and unhinged.

‘He even described law enforcement as the enemy,’ Trump said of Biden Thursday night, taking Biden’s words warning of the overmilitarization of the police out of context.

On July 8, the former vice president said, ‘Surplus military equipment for law enforcement: they don’t need that. The last thing you need is an up-armored Humvee coming into a neighborhood – it’s like the military invading.’

‘They don’t know anybody; they become the enemy. They’re supposed to be protecting these people,’ Biden said.

The president has made the claim before, with fact checkers rating it a distortion.

He had traveled to North Carolina – another swing state – earlier to give an address on healthcare before traveling to Florida, his adopted homestate.

Trump, of course, brought up this fact with the audience – which he suggested was 30,000 strong, while Biden – who’s limited campaigning due to the coronavirus pandemic – can’t even fill his ‘circles,’ used at the Democrat’s events to ensure proper social distancing.

‘Did you see he did a lid this morning again? Lid. Lid. Do you know what a lid is?’ Trump asked the crowd. ‘A lid is when you put out the word that you’re not going to be campaigning today. That he won’t be working today.’

Trump suggested Biden could be ‘right’ when it came to this tactic.

‘Think of it, supposing he never campaigns and he wins, do you know how badly I’m going to feel?’ he asked the audience. ‘I’m working hard.’

Trump again hammered Biden for being a ‘low energy individual,’ which echoed the nickname he gave to former Florida Gov. Jeb Bush in 2016 during the GOP primary.

The president then turned his attention to the first presidential debate, which will take place Tuesday night in Cleveland, Ohio.

And like he has for weeks, Trump accused Biden of being on drugs.

‘They’ll give him a big shot of something,’ Trump said looking ahead to the debate. ‘He’ll be Superman for about 15 minutes.’