Trump and Kim Jong-un ‘AGREE in their assessment’ Joe Biden is a ‘Swampman’ and a ‘low IQ individual,’ Sarah Sanders says

‘They agree in their assessment of former Vice President Joe Biden,’ Sanders said on NBC’s ‘Meet the Press.’

‘The president doesn’t need somebody else to give him an assessment of Joe Biden. He’s given his own assessment a number of times. I think you’ve seen it. I’m sure you’ve covered it on your program. The president watched him and his administration with President Obama fail for eight years,’ she added. 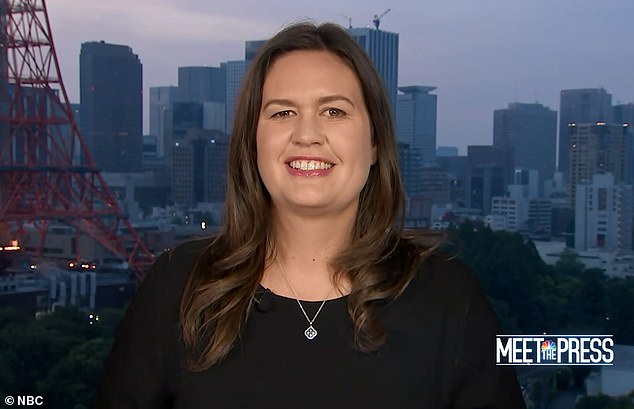 Sanders was asked about a tweet the president posted Saturday after it was revealed North Korea conducted missile tests.

In a tweet where he misspelled Biden’s name, Trump wrote: ‘North Korea fired off some small weapons, which disturbed some of my people, and others, but not me.

‘I have confidence that Chairman Kim will keep his promise to me, & also smiled when he called Swampman Joe Bidan [sic] a low IQ individual, & worse.

‘Perhaps that’s sending me a signal?’

Trump, who later deleted the tweet and re-posted it with Biden’s name spelled correctly, was referring to a recent piece published by state-run media in North Korea.

The editorial was full of insults hurled at Biden, who was labeled a ‘fool of low IQ’ and an ‘imbecile bereft of elementary quality as a human being.’

NBC’s Chuck Todd asked Sanders ‘why Americans should not be concerned that the president of United States is essentially siding with a murderous authoritarian dictator over a former vice president in the United States?’ 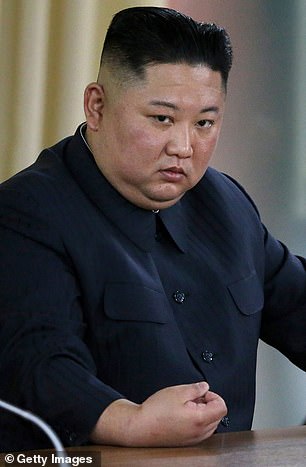 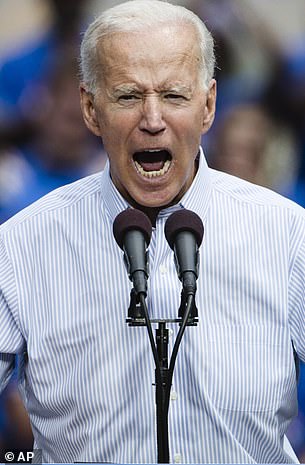 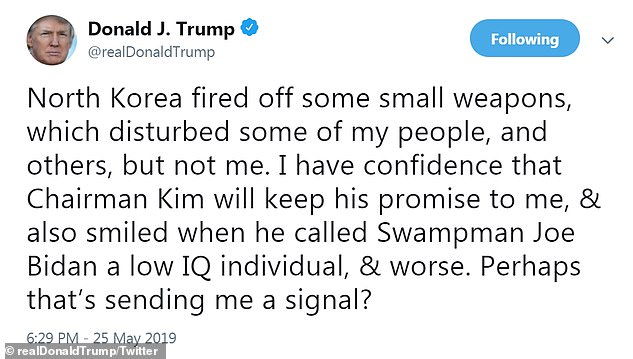 Trump also dismissed concerns about recent missile launches from North Korea and said he was confident that the country’s leader, Kim, would keep promises that he had made 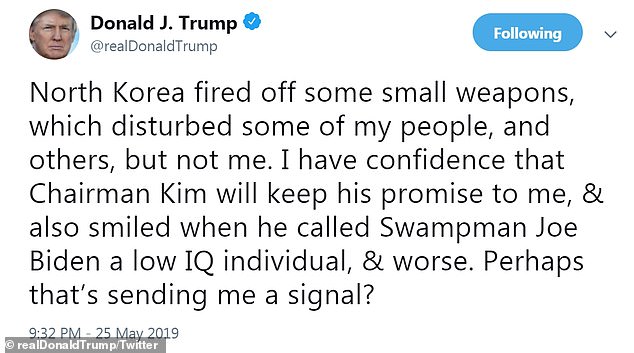 Trump deleted the original tweet, and then re-posted it with Biden’s name spelled correctly

‘Chuck, the president’s not siding with that,’ Sanders said. ‘But I think they agree in their assessment of former Vice President Joe Biden. Again, the president’s focus in this process is the relationship he has and making sure we continue on the path towards denuclearization. That’s what he wants to see and that’s certainly what the people in this region want to see. And are hopeful that the president is right and that that relationship will be what helps move us further down that path.’

Biden, who is running for the Democratic presidential nomination, frequently slams Trump’s relationships with ‘dictators and tyrants’ like Kim and Russian President Vladimir Putin.