Trump attacks Democrats in Iowa and claims: ‘They want to kill our cows!’

Trump jets ditches Democrats stuck serving on his impeachment jury – and tells Iowa supporters he wants another crack at ‘crazy Hillary’ after ripping into ‘Pocahontas’ ‘Sleepy Joe’ and Pete ‘Butt-edge edge’ – then claims ‘They want to kill our cows!’

President Donald Trump left one of the nation’s biggest political stories – his own impeachment – to join another – the battle for Iowa, using a campaign rally to belittle his Democratic opponents and attack top figures trying to impeach him.

‘We’re going to defeat the radical socialist Democrats that are right down the street,’ said Trump.

Trump weaved his remarks back and forth between would-be challengers and those trying to impeach him, hitting at his favorite targets and smearing all of them as ‘socialists.’ 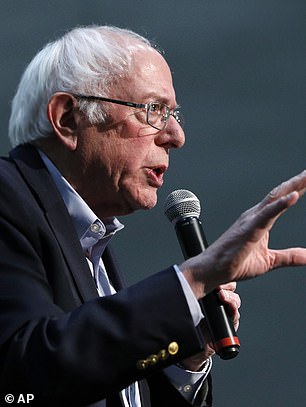 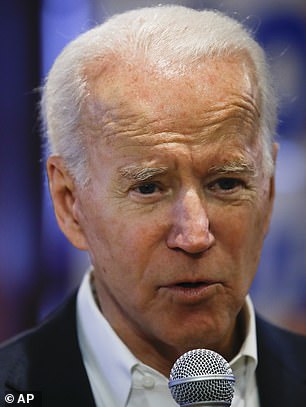 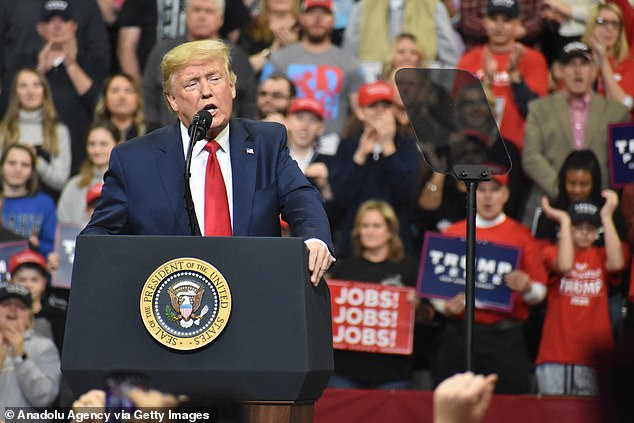 Trump brought up illegal immigration and trade deals while attacking the Green New Deal and homelessness in S.F. 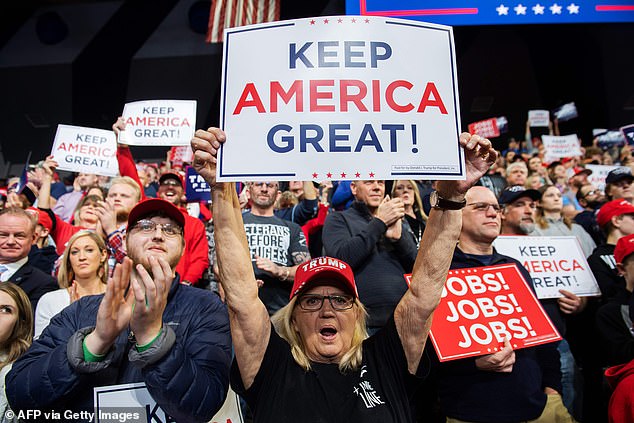 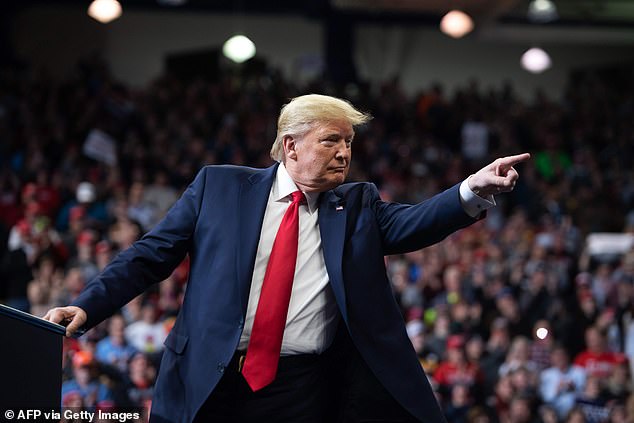 US President Donald Trump gestures as he speaks during a “Keep America Great” campaign rally at Drake University in Des Moines, Iowa, January 30, 2020 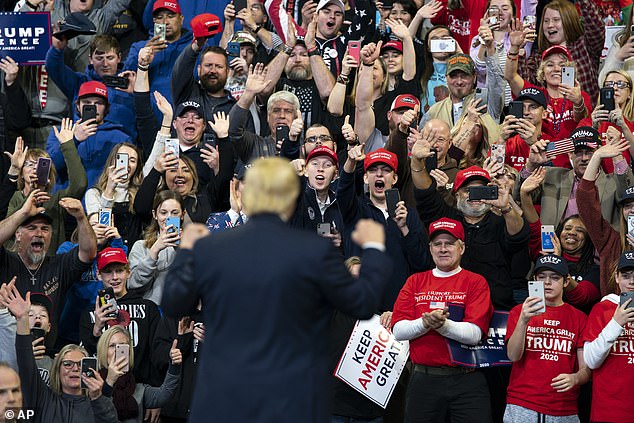 He tried to link the opposition party to Rep. Alexandria Ocasio-Cortez and the Green New Deal. They want to kill our cows. That means you’re next,’ he told a crowd in Des Moines.

‘If we don’t win, your farms are going to hell, I can tell you right now,’ Trump said.

‘It’s all a con job. They don’t love our country. I swear they don’t,’ after going after the media and Democrats.

He tore into House Speaker Nancy Pelosi and her hometown of San Francisco for its homeless problem. ‘Needles all over the place … People living in tents if they’re lucky. Living on their most important entryways…’ Trump said.

He blasted ‘President Barack Hussein Obama’ and ‘Adam “shifty” Schiff’ – who was leading House impeachment managers on the floor Thursday.

Trump complained that the newly-inked USMCA trade deal didn’t get enough attention. ‘It barely got any mention. They talk about the impeachment hoax,’ Trump complained.

Trump returned to immigration, a key issue of his attacks on Democrats in 2016.

He said he came up with the term ‘caravan,’ and warned of those who joined them.

‘Some of those people are stone-cold killers,’ he said.

With Democrats saying arugments made by his legal team could allow a president to be a monarch, Trump made a joke about busting through time limits after citing a poll by the New York Times, a paper he usually derides.

He blasted the ‘fake news,’ then impersonated CNN. ‘CNN. They say fake news has reported. No no – you’re fake news!’ Trump said.

Hundreds of people booed at the mention of the press. A child of about 11 years gave two thumbs-down toward the press.

Trump fumed that the country just had one of its best year. ‘And I just got impeached!’ he said incredulously.

Even as he laced his remarks with warnings and attacks, Trump promised victory.

‘No, it’s not going to work. Watch. Just watch. They want to nullify your ballots, poison our democracy and overthrow the entire system of government. That’s not happening, I can tell you that,’ he said.

The rally installed allowed Trump to jet into Iowa’s frigid political terrain to get a taste of the political scene in the Hawkeye State, where Joe Biden, Bernie Sanders, Elizabeth Warren, and others are looking to turn the caucuses to vault to position to become his primary contender.

He mocked Joe Biden, the subject of key impeachment testimony following charges Trump abused power by trying to get Ukraine to investigate his rival.

‘It was over for him actually if you knew him, a long time ago. Now it’s really over,’ Trump said.

He started his rally as if in mid-thought, then rift between a dozen or more topics. ‘I work so hard for this state,’ Trump told the crowd after an ear-numbing rendition of Lee Greenwood’s ‘God Bless the USA.’

‘If we don’t win, your farms are going to hell, I can tell you right now,’ he told the fally crowd in the state capital.

Trump brought up a New York Times poll, once again impugning the field as socialists (Bernie Sanders calls himself a Democratic socialist).

‘They have me pitted against every one of the socialists. And we’re beating every one,’ said Trump. We’re beating them like they haven’t been beaten before.’

Trump hit his rivals on ratings – after his own impeachment drastically truncated the media attention paid to Iowa.

‘Nobody’s watching their debates,’ he said.

‘They don’t care about the farmer,’ Trump said of Democrats, touting multi-billion subsidies he pushed through to reimburse farmers for tariffs China slapped on US products.

‘Oh let’s vote for Pocahontas. Let’s vote for Bernie. Let’s vote for Sleepy Joe. He always gets the name wrong. How many times has he missed it … he says great to be in the great state of Ohio and they say, Joe you’re in Iowa.’

Trump flew to Des Moines Thursday after holding an event in Michigan, where he touted a new U.S.-Mexico-Canada trade agreement, touted manufacturing gains, mocked Hillary Clinton, and provided reassurances on the coronavirus.

Even as Trump spoke, the Senate was wrapping up its second day of trial questions, with signs Republicans were coalescing on keeping out witnesses

Earlier, Vice President Mike Pence warmed up the crowd with another string of laudatory remarks about his boss.

‘In these divided times, have faith. Have faith in this president, whose drive and heart and vision have made America great again and will make America greater than ever before,’ Pence said.