The Trump-backed lawyer Stefan Passantino was identified Wednesday as the attorney who told January 6 witness Cassidy Hutchinson to testify that she did not recall details that she did.

CNN identified Passantino, a former White House ethics lawyer, after it was revealed during Monday’s final hearing of the Democrat-led committee that an attorney allied with former President Donald Trump pushed Hutchinson to mislead lawmakers.

‘She was advised to say that she didn’t recall something when she did. So that’s pretty serious stuff,’ committee member Rep. Zoe Lofgren told CNN after Monday’s hearing.

The report said ‘the lawyer had advised the witness that the witness could, in certain circumstances, tell the Committee that she did not recall facts when she actually did recall them.’

‘When the witness raised concerns with her lawyer about that approach,’ the report’s summary said, the lawyer said, ‘They don’t know what you know, [witness.] They don’t know that you can recall some of these things. So you saying, “I don’t recall” is an entirely acceptable response to this.’ 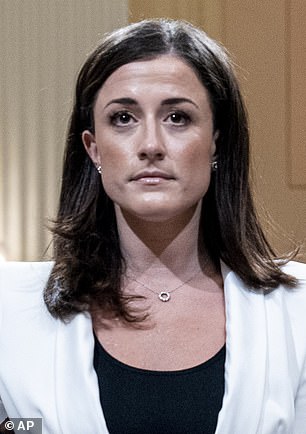 The Trump-backed lawyer Stefan Passantino (left) was identified Wednesday as the attorney who told January 6 witness Cassidy Hutchinson (right) to testify that she did not recall details that she remembered.

Passantino was Hutchinson’s first lawyer, but she replaced him before delivering her blockbuster testimony in late June.

Hutchinson had worked in the White House under Chief of Staff Mark Meadows.

Passantino and his law firm, Elections LLC, were funded by Trump’s Save America political action committee.

The January 6 committee report said that Passantino did not tell Hutchinson who was paying her legal bills.

She was already cooperating with the Justice Department’s probe of January 6 after becoming a star witness.

In a statement to the network, Passantino denied advising Hutchinson to mislead committee members.

‘I represented Ms. Hutchinson honorably, ethically, and fully consistent with her sole interests as she communicated them to me,’ Passantino said. ‘I believed Ms. Hutchinson was being truthful and cooperative with the Committee throughout the several interview sessions in which I represented her.’

He also pointed out that it’s not uncommon for clients to change lawyers ‘because their interests or strategies change.’

The committee also accused Passantino of sharing Hutchinson’s testimony with other lawyers and the press without her permission – a charge he denied.

‘External communications made on Ms. Hutchinson’s behalf while I was her counsel were made with her express authorization,’ he said, according to CNN.

Passantino also told the network he was on leave from the law firm where he’s a partner, the Milwaukee-based Michael Best & Friedrich LLP, ‘given the distraction of this matter.’

Hutchinson recalled an impromptu meeting on January 6 after Trump returned to the White House after speaking at the Ellipse she had with former Deputy Chief of Staff Tony Ornato and Bobby Engel, the head of Trump’s security detail.

‘Did you hear what effing happened in the Beast?’ she said Engel asked her.

She replied that she hadn’t heard.

‘Tony proceeded to tell me that when the president got in the Beast he was under the impression from Mr. Meadows that the off-the-record movement to the Capitol was still possible and likely to happen, but that Bobby had more information,’ Hutchinson said.

Trump, Hutchinson said, thought they were going up to the Capitol – like he had told his crowd of supporters he would do.

This was in the hours before the attack.

‘When Bobby had relayed to him we’re not, we don’t have the assets to do it, it’s not secure, we’re going back to the West Wing, the president had a very strong, very angry response,’ Hutchinson continued.

She was told that Trump said something like: ‘I’m the effing president, take me up to the Capitol now!’

Engel, she said, reiterated that they were headed back to the White House.

‘The president reached up toward the front of the vehicle to grab at the steering wheel, Mr. Engel grabbed his arm and said, “Sir, you need to take your hand off the steering wheel, we’re going back to the West Wing, we’re not going to the Capitol,”‘ she said.

‘Mr. Trump then used his free hand to lunge toward Bobby Engel and when Mr. Ornato had recounted this story to me he motioned toward his clavicles,’ Hutchinson said, as a sign the president went for Engel’s throat.

GOP Rep. Liz Cheney then asked Hutchinson if Engel or Ornato ever changed their stories.

‘Neither Mr. Ornato or Mr. Engel told me ever that it was untrue,’ Hutchinson testified.

Hutchinson also recalled hearing plates get smashed when Trump was given bad news.

She remembered ‘hearing noise’ shortly after an Associated Press article came out that quoted Attorney General Bill Barr – who said there was no evidence of widespread 2020 election fraud, like Trump claimed.

Hutchinson then walked to the president’s dining room.

‘And I noticed that the door was propped open and the valet was inside the dining room changing the tablecloth off of the dining room table,’ she said. ‘He motioned for me to come in and then pointed toward the front of the room near the fireplace mantel and the TV.’

‘Where I first noticed there was ketchup dripping down the wall,’ she continued. ‘And there’s a shattered porcelain plate on the floor.’

‘The valet had articulated that the president was extremely angry at the attorney general’s AP interview and had thrown his lunch against the wall,’ she said, explaining that she then helped with the clean-up.

Cheney then asked Hutchinson if this was typical Trump behavior.

‘There were several times throughout my tenure with the chief of staff that I was aware of him either throwing dishes or flicking the table cloth to let all of the contents of the table go onto the floor and likely break or go everywhere,’ Hutchinson volunteered.