Donald Trump got a humanitarian do-over on Wednesday, beginning a tax reform speech in Missouri with a nod to the ‘great, great people’ hit by record flood waters in Texas and Missouri.

A day after he was criticized for visiting Texas without spending any time with rescued victims of Hurricane Harvey, the president said his government stands with them ‘every single step of the way’ as the storm continues to ‘pose a grave danger to life. … We must protect the lives of our people.’

‘To the people of Houston and across Texas and Louisiana, we are here with you today,’ Trump said. ‘We are with you tomorrow. And we will be with you every single day after to restore, recover and rebuild.’

‘Our thoughts and prayers remain firmly with the citizens and our fellow people – people! – great, great people all affected by this tragedy.’

Trump hammered the word ‘people’ hard and repeated it for emphasis. 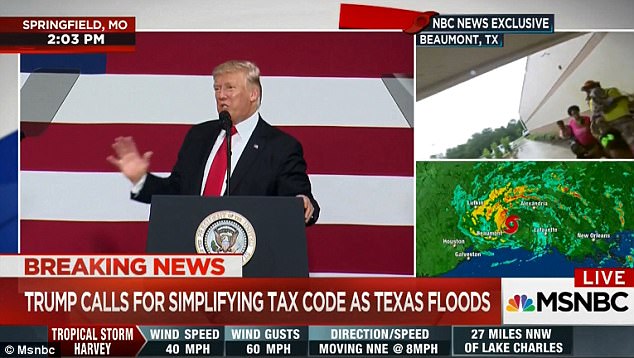 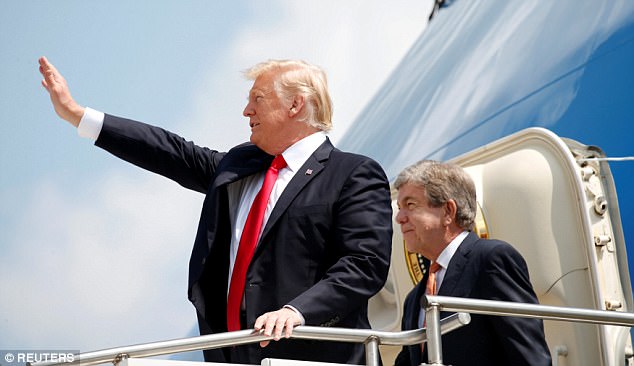 The president arrived in Springfield, Missouri on Wednesday, emerging from Air Force One with Republican Sen. Roy Blunt

He also declared that ‘recovery will be tough,’ a day after walking back his Monday prediction that Texas would be ‘up and running very, very quickly.’

Trump mused during a briefing at the Texas Department of Public Safety on Tuesday that the record flood waters in southern Texas might never recede.

‘Nobody’s ever seen this much water. The wind was pretty horrific, in particular, but the water has never been seen like this, to this extent. And it’s, maybe someday going to disappear. We keep waiting,’ Trump said in Austin.

First lady Melania Trump soon followed with an official statement of her own.

‘The effects of Hurricane Harvey will be felt in Texas, Louisiana, and other parts of the country for many months and years to come,’ she said. 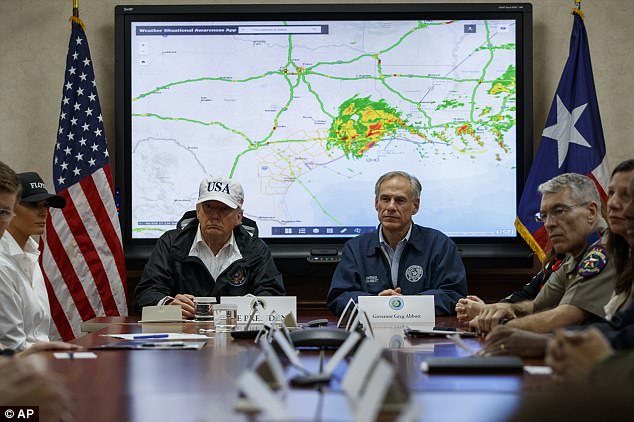 Trump spent most of Tuesday talking to officials tasked with relief efforts, but didn’t visit any shelters where those rescued from the flooding are staying 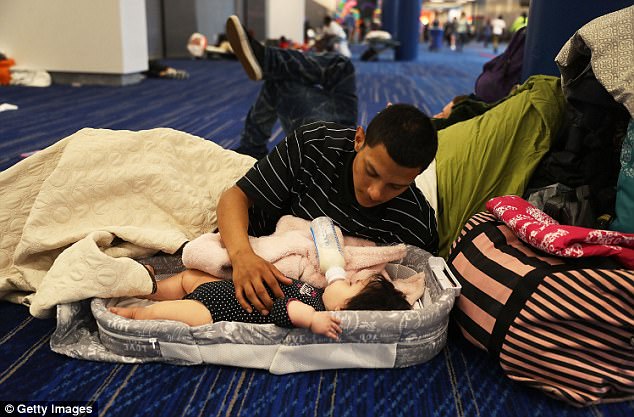 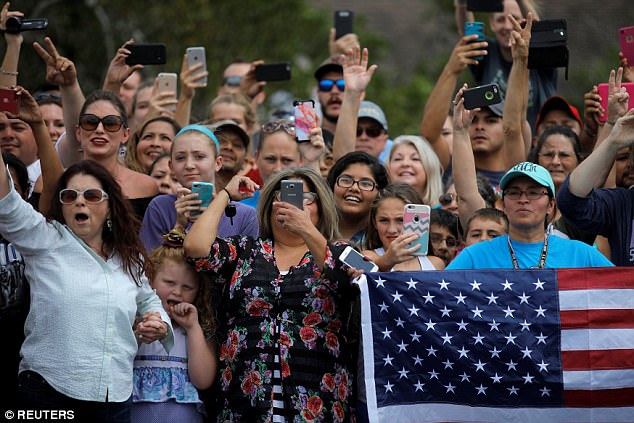 A crowd of people welcomed Trump at a Corpus Christi, Texas fire station on Tuesday – but they were the lucky ones who didn’t loset their homes

Areas east of Houston have been drenched with more than 50 inches of rain. The storm continues to hover over southeastern Texas and parts of southwestern Louisiana.

Earlier, Trump told a crowd of Texans who had lined up outside a Corpus Christi firehouse to catch a glimpse of him that the recovery effort is ‘going well’ and his administration is ‘here to take care of you.’

‘We love you. You are special,’ the president said to cheers from onlookers. ‘This is historic, it’s epic, what happened, but you know what, it happened in Texas. Texas can handle anything.’

Trump held up the Texas flag as he delivered the impromptu remarks to the throng of cheering Corpus Christi residents after a briefing on relief efforts from emergency responders.

The president and first lady spent the day in Texas, touring government facilities in Corpus Christi and Austin.

They headed back to Washington Tuesday evening following their visit to the Lone Star State’s emergency management center. 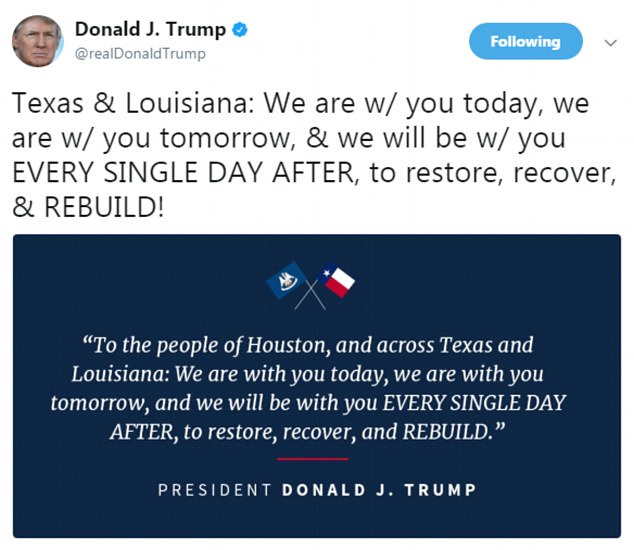 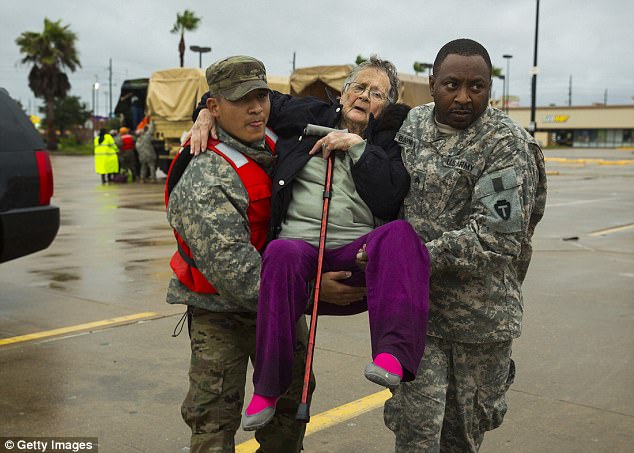 Texas Army National Guard members Sergio Esquivel, left, and Ernest Barmore carry 81-year-old Ramona Bennett after she and other residents were rescued from their Pine Forest Village neighborhood due to high water from Hurricane Harvey 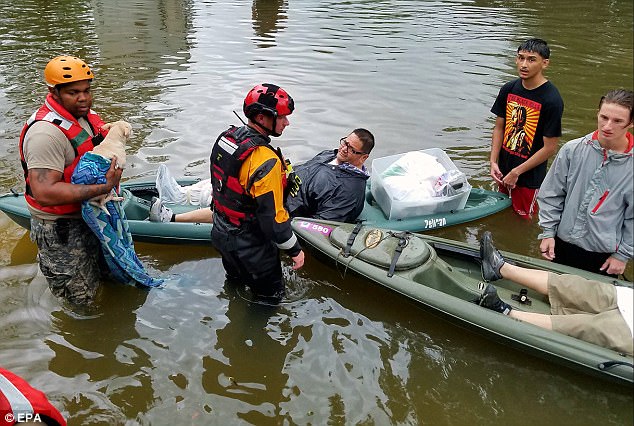 President Trump said Monday that they could return to Texas on Saturday, and possibly stop through Louisiana, but nothing has been determined yet.

Melania Trump hinted that she would like to be part of the boots on the ground.

‘I want to be able to offer my help and support in the most productive way possible, not through just words, but also action,’ she said in her statement issued Tuesday night.

The president acknowledged in Texas that the nation’s largest state would need long-term assistance with its recovery and that the effort would be a ‘costly proposition.’

But he said he was confident that Congress would come to an agreeable solution on disaster relief funding.

Trump told a Texas reporter during a press conference Monday that he had already spoken to lawmakers and ‘everybody feels for you and feels for what you’re going through.’

‘Before we begin, I’d like to take a few moments to discuss the deeply tragic situation in Texas and Louisiana. As we all know, our gulf coast was hit over the weekend with a devastating hurricane of historic proportion. Torrential rains and terrible flooding continue to pose a grave danger to life and to property. Our first responders have been doing absolutely heroic work to shepherd people out of harm’s way, and their courage and devotion has saved countless lives. They represent truly the very best of America.

‘We must be vigilant. We must protect the lives of our people. I was on the ground in Texas yesterday to meet with Governor Abbott, who is way, an incredible job. Local officials so that we could coordinate the very big and unprecedented federal response. In difficult times such as these, we see the true character of the American people, their strength, their love and their resolve. We see friend helping friend, neighbor helping neighbor, and stranger helping stranger. And together, we will endure and we will overcome.

‘To those affected by this storm, we are praying for you and we are here with you every single step of the way. And I can speak, I know, for the people in this room. Every step of the way. To those Americans who have lost loved ones, all of America is grieving with you and our hearts are joined with yours forever.

‘The citizens of Texas and the Gulf Coast need all the prayers, support and resources our communities have to offer. Recovery will be tough, but I have seen the resilience of the American spirit first-hand all over this country. To the people of Houston and across Texas and Louisiana, we are here with you today. We are with you tomorrow. And we will be with you every single day after to restore, recover and rebuild. Our thoughts and prayers remain firmly with the citizens and our fellow people – people! – great, great people all affected by this tragedy.’

STATEMENT FROM FIRST LADY MELANIA TRUMP AFTER HER VISIT TO TEXAS

The effects of Hurricane Harvey will be felt in Texas, Louisiana, and other parts of the country for many months and years to come. So far, 1.7 million people are under orders to evacuate their homes, and, as the floodwater in Houston rises, sadly, so will the number of evacuees.

I want to be able to offer my help and support in the most productive way possible, not through just words, but also action. What I found to be the most profound during the visit was not only the strength and resilience of the people of Texas, but the compassion and sense of community that has taken over the State. My thoughts and prayers continue to be with the people of Texas and Louisiana.

‘Texas is a unique place. It’s a great, great state, great people, and I think you you’ll be up and running very, very quickly. Really, very quickly,’ he said then.

Trump was more sober in his assessment of the disaster on Tuesday after he was briefed in person by state and federal officials managing the crisis.

Trump said several times this week that the storm was ‘historic’ and ‘epic.’

‘It it’s a long road. Still pouring, still a lot of rain. Nobody has ever seen anything like it,’ he said Monday.