Donald Trump has used a campaign-style rally in Michigan on Saturday to lash out at Jon Tester over his criticism of ‘Great American Doctor’ Ronny Jackson.

The President branded Tester ‘disgraceful’ for derailing Jackson’s Veterans Affairs nomination and claimed to have information about the Democrat senator that would stop him from being re-elected.

‘What Jon Tester said about this man is a disgrace. I have things I could say about Tester… and if I said them he wouldn’t be elected again,’ Trump told the cheering audience in Washington Township.

Trump earlier called for Tester to resign after he alleged the president’s pick for Secretary of Veterans Affairs had a dubious record of prescribing and drunk driving.

The White House doctor withdrew his nomination on Thursday after Tester’s allegations that he was known as ‘the candy man’ for handing out controlled substances on presidential trips.

Jackson released a statement calling the allegations against him false and fabricated.

‘If they had any merit, I would not have been selected, promoted and entrusted to serve in such a sensitive and important role as physician to three presidents over the past 12 years,’ Jackson said.

‘Going into this process, I expected tough questions about how to best care for our veterans, but I did not expect to have to dignify baseless and anonymous attacks on my character and integrity.’

The doctor said he was withdrawing from consideration for the spot because the allegations against him ‘have become a distraction’ for Trump. 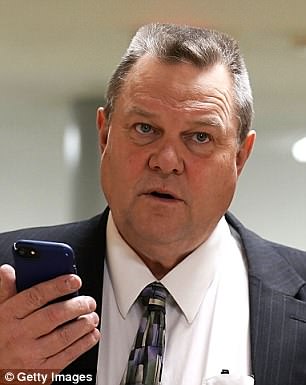 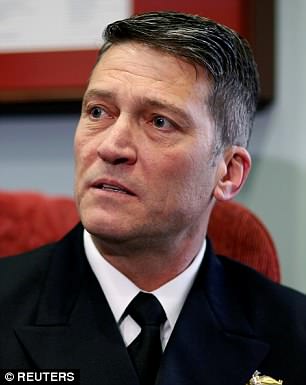 The Trump is competing for airtime with the White House correspondents’ dinner, which the President decided to snub because he would rather be with his ‘favorite deplorables’ than stuck in a room ‘with a bunch of fake news liberals who hate me’.

It holds particularly bad memories for Trump, who was roasted by former President Barack Obama at the 2011 dinner for leading the so-called ‘birther’ movement, which claimed he was not a genuine US citizen.

Obama said: ‘I know that he’s taken some flack lately—no one is prouder to put this birth-certificate matter to rest than the Donald. And that’s because he can finally get back to the issues that matter, like: did we fake the moon landing? What really happened in Roswell? And—where are Biggie and Tupac?’

By contrast, Trump felt confident on a big crowd and a friendly reception in Michigan – one of the states in the Upper Midwest that Hillary Clinton counted on in 2016 but saw slip away.

In fact, Trump was the first Republican presidential nominee to capture Michigan since George H.W. Bush in 1988.

‘Look forward to being in the Great State of Michigan tonight,’ Trump said in a tweet hours before the event. 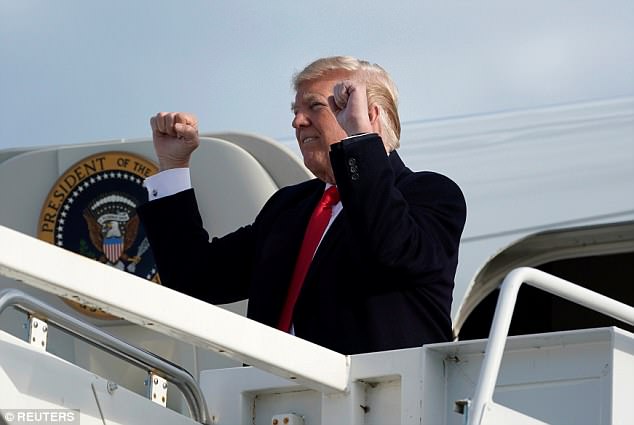 The President, dressed in his signature dark suit and long red tie, was seen walking down the steps of Air Force One at Selfridge Air National Guard Base before fist-pumping the air

He also tweeted: ‘Major business expansion and jobs pouring into your State. Auto companies expanding at record pace. Big crowd tonight, will be live on T.V.’

Trump’s tweet expressing his excitement about spending the evening with his ‘favorite deplorables’ quickly racked up thousands or retweets.

During the 2016 campaign, Clinton drew laughs when she told supporters at a private fundraiser that half of Trump supporters could be lumped into a ‘basket of deplorables’ – denouncing them as ‘racist, sexist, homophobic, xenophobic, Islamophobic, you name it.’

Clinton later did a partial rollback, said she had been ‘grossly generalistic’ and regretted saying the label fit ‘half’ of Trump’s supporters. But she didn’t back down from the general sentiment.

Trump soon had the video running in his campaign ads, and his supporters wore the ‘deplorable’ label as a badge of honor.

Macomb County, the site of Trump’s rally, is among the predominantly white counties known as a base for ‘Reagan Democrats’ – blue-collar voters who abandoned the Democratic Party for Ronald Reagan, but who can be intriguingly movable.

Democrat Barack Obama won the county twice in his White House runs, then Trump carried it by more than 11 percentage points.