Trump blames ‘agitators and anarchists’ at BLM protests for rise in covid cases in Seattle, Portland

President Donald Trump has once again decried ‘anarchists and agitators’ at anti-racism protests – this time blaming them for causing a surge in coronavirus cases in the Pacific Northwest.

‘In the wake of the recent mass gatherings Americans have witnessed in the streets of Portland and Seattle, we are also tracking a significant rise in cases in both metropolitan areas because of what’s been going on,’ Trump said at a White House press briefing on Tuesday.

He went on to double down on his previous attacks on the protesters, who have been embroiled in escalating clashes with federal troops in the cities over the past few weeks.

‘We, as you know, have done a excellent job of watching over Portland and watching our courthouse where they wanted to burn it down,’ Trump said in reference to the Mark O. Hatfield federal courthouse at the heart of the city’s unrest.

‘They’re anarchists. Nothing short of anarchists, agitators. And we have protected it very powerfully.’

Hitting back at critics who’ve accused his administration of exacerbating the situation by deploying federal troops to Portland, Trump declared that the courthouse would have been destroyed if not for his actions.

‘If we didn’t go there, I will tell you, you wouldn’t have a courthouse,’ he said. ‘You’d have a billion-dollar burned-out building.’ 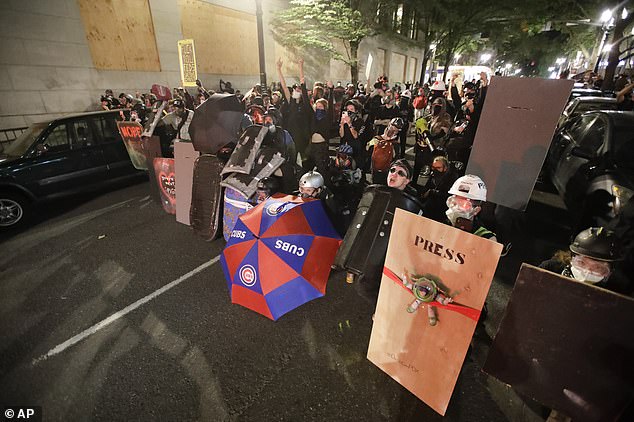 Trump branded the protesters ‘anarchists and agitators’ and accused them of trying to burn Portland’s courthouse down. Pictured: Demonstrators shield themselves from advancing federal officers during a Black Lives Matter protest in Portland on Monday night 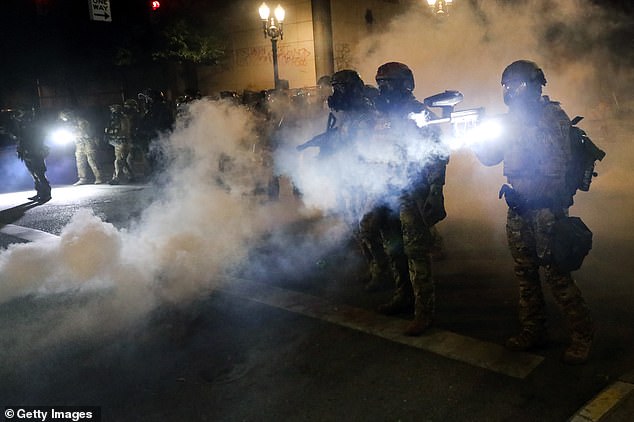 The county saw an increase in new cases each consecutive week between late June and mid-July, but new cases have actually declined significantly over the past two weeks.

New cases peaked on the week ending on July 12 with 593 reported. Last week, that number declined to 192, according to the county’s heath department.

A total of 4,120 cases and 88 deaths have been reported in Multnomah County to date.

In King County, Washington, where Seattle is located, the number of daily new cases appears to have plateaued in recent weeks, even though the daily average of 172 in the week ending July 24 was four times higher than the rate reported in early June. 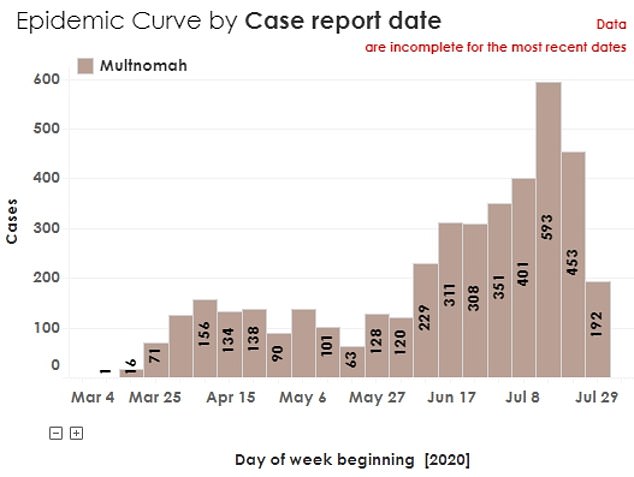 Trump’s claims about rising cases appeared to contradict data from Multnomah County, Oregon, where Portland is located. The county saw an increase in new cases each consecutive week between late June and mid-July, but new cases have declined in the past two weeks

In King County, Washington, where Seattle is located, the number of daily new cases appears to have plateaued in recent weeks, even though the daily average of 172 in the week ending July 24 was four times higher than the rate reported in early June

Trump’s comments on Tuesday came hours after Portland saw its 61st night of unrest since the May 25 death of George Floyd, a black man who was killed when a white Minneapolis cop kneeled on his neck during an arrest.

Photos and videos from nightly protests in both Portland and Seattle show nearly all of the hundreds of participants wearing coronavirus masks as the crowds make it difficult to social distance.

Many of the protesters have added a second layer of protection with gas masks to shield themselves from tear gas and pepper spray deployed by law enforcement. 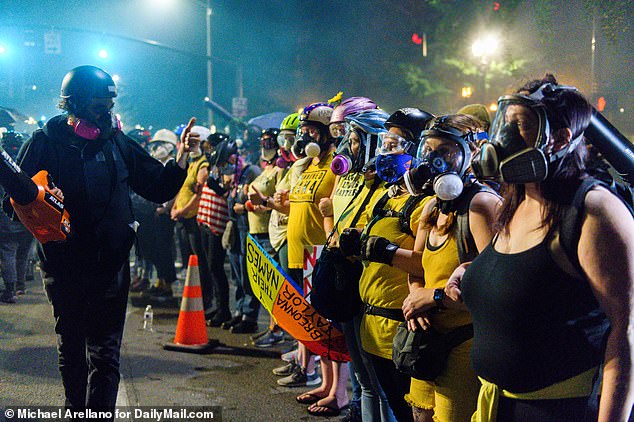 Photos and videos from nightly protests in both Portland and Seattle show nearly all of the hundreds of participants wearing masks as the crowds make it difficult to social distance. Pictured: A ‘leaf-blower dad’ checks on the Wall of Moms after tear gas is deployed by federal police outside the Mark O. Hatfield federal courthouse in Portland on Monday night 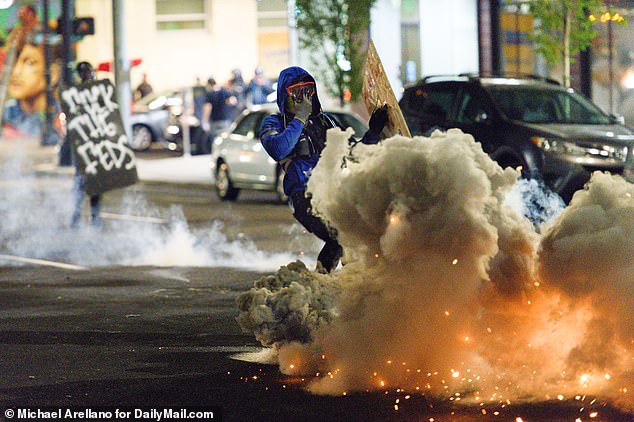 A protester kicks a tear gas round back toward federal officers near the Mark O. Hatfield federal courthouse in Portland on Monday night.

On Monday it was revealed that Trump is sending at least 100 additional federal agents – deputy marshals from the US Marshals Service – into Portland to  fortify security outside the Hatfield courthouse.

The Washington Post obtained an internal email from the Marshals Service which indicated that the additional officers began arriving last Thursday, ahead of a heated weekend that saw heavily armed federal troops repeatedly fire tear gas, flash bangs and pepper balls into crowds of protesters as they attempted to breach a fence surrounding the courthouse.

Trump decried the protests and subsequent media coverage in a pair of tweets on Monday night, writing: ‘The Fake News Media is trying to portray the Portland and Seattle “protesters” as wonderful, sweet and innocent people just out for a little stroll.

‘Actually, they are sick and deranged Anarchists & Agitators who our great men & women of Law Enforcement easily control, but who would destroy our American cities, and worse, if Sleepy Joe Biden, the puppet of the Left, ever won.

‘Markets would crash and cities would burn. Our Country would suffer like never before. We will beat the Virus, soon, and go on to the Golden Age – better than ever before!’

The president sent a direct warning to protesters earlier in the night, tweeting:  ‘Anarchists, Agitators or Protestors who vandalize or damage our Federal Courthouse in Portland, or any Federal Buildings in any of our Cities or States, will be prosecuted under our recently re-enacted Statues & Monuments Act.

‘MINIMUM TEN YEARS IN PRISON. Don’t do it!’

And prior to that tweet, Trump doubled down on his support for the federal agents’ actions in another post, claiming that federal properties in Portland ‘wouldn’t last a day’ without their presence.

Hours later the US Attorney’s Office in Oregon shared photos of items that had been confiscated from them over the weekend – including gasoline, hockey sticks, defense shields, leaf blowers, paint sprayers, cans of paint, and a jar prepped for a Molotov cocktail.

Protesters from the Wall of Moms and Don’t Shoot Portland activist groups filed a federal lawsuit against the Department of Homeland Security on Monday, accusing federal officers of violating their free speech, using excessive force and overstepping their authority.

The suit came as reports emerged that the DHS is also considering sending 50 additional Customs and Border Protection personnel to Portland in the coming days.

That plan has yet to be finalized, according to anonymous administration officials, but if it proceeds it would mark a significant expansion of the federal force that first arrived on July 4.

About 114 agents were deployed to the city by mid-July, according to the Post, which said its unclear how many of the existing agents would be relieved and sent home when the 150 reinforcements from the Marshals Service and DHS arrive.

Many critics see the deployment of federal troops as a political ploy by Trump to drum up a ‘law and order’ campaign amid his uphill re-election battle – while the president and his allies insist that it was necessary to protect the city.