US President Donald Trump said he is in favor of members of Congress having the ability to vote in legislation from their homes as three lawmakers have confirmed they tested positive for coronavirus.

Trump made his comments Sunday night after the third phase of a coronavirus stimulus package was unable to pass through the Senate Sunday as Democrats blocked the GOP measure meant to target economic fallout from the deadly outbreak.

The infected lawmakers were Republican Senator Rand Paul, and Representatives Mario Diaz-Balart, a Republican from Florida, and Ben McAdams, a Democrat from Utah. Among those who came in contact with the three was Republican Senator Mitt Romney, who has gone into self-quarantine.

Two House members also announced last week they contracted the virus. Several who came in contact with them, as well as Paul, have isolated themselves, including Republican Senator Mitt Romney.

‘Romney’s in isolation?’ Trump asked when he learned of the self-quarantine at a press briefing Sunday, to which a reporter answered, ‘yes.’ 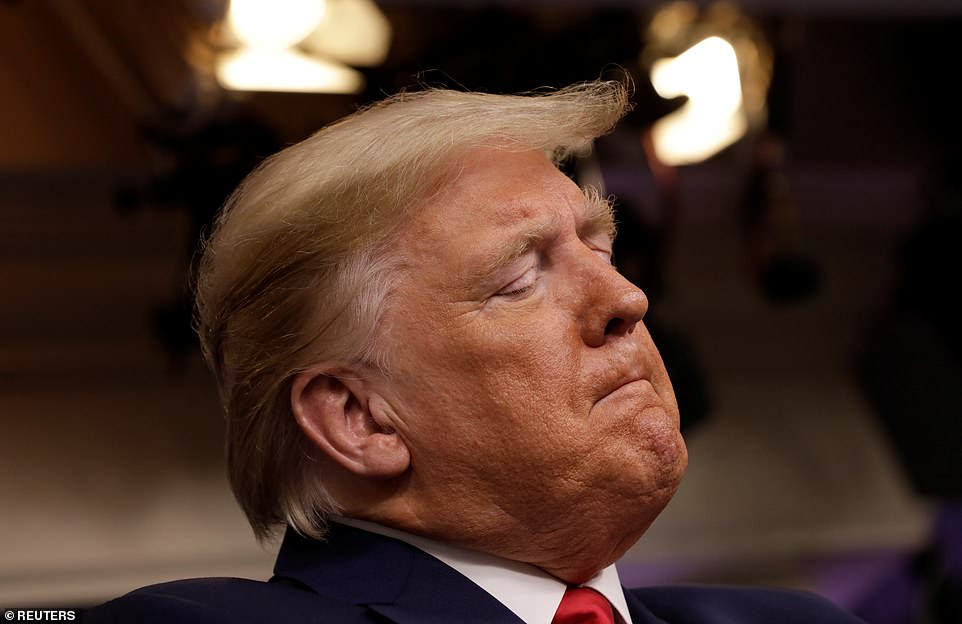 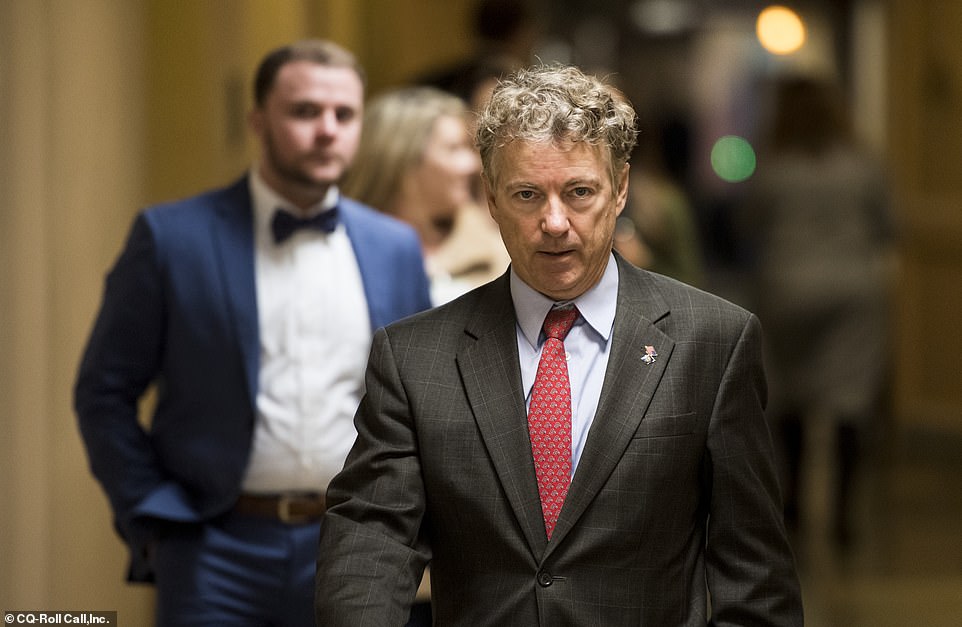 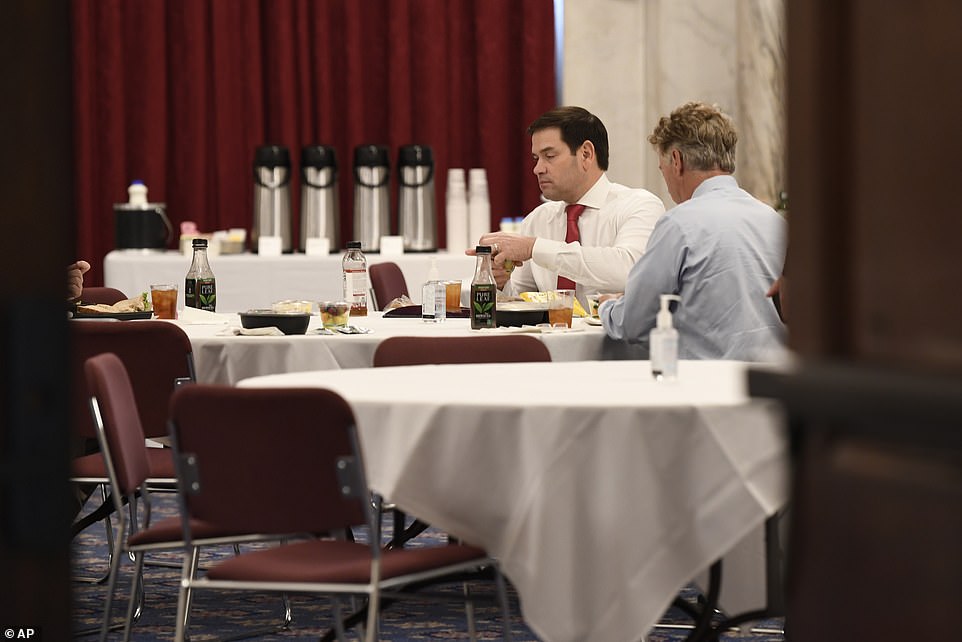 Paul is the first senator to contract the virus, and on Friday was in a GOP luncheon where he came in close contact with several other Republican senators

The first two phases of the economic stimulus packages made it through Congress with few hiccups – but the first phase cost $8.3 billion while the second allotted more than 100 billion.

The new GOP bill would filter nearly $2 trillion into the American economy to keep business, industry and citizens financially stable through the uncertainty.

Mitch McConnell blasted the Democrats after the bill failed on Sunday. He said: ‘The notion that we have time to play games here with the American economy and the American people is utterly absurd.

‘The American people expect us to act tomorrow and I want everybody to fully understand if we are’t able to act tomorrow it will be because of our colleagues on the other side continuing to dicker when the country expects us to come together.’

Democrats have said that Republicans are trying to push a partisan bill that favors large corporations, while the GOP says Dems are trying to include liberal policies which they couldn’t otherwise get into law.

Chuck Schumer said: ‘The legislation has many problems. At the top of the list it includes a large corporate bailout with no protections for workers and virtually no oversight.’

Passing a third phase could prove even more difficult as more lawmakers leave Washington D.C. and head home to wait out their isolation periods.

With that possibility, Trump made his argument for allowing lawmakers to vote by remote.

‘I was thinking about it today, I mean we could be in this – look, with what’s going on, nobody’s seen anything like this. You could have a lot of people in there from Congress,’ he continued. ‘I would be totally in favor of it on a temporary basis.’

Paul’s office announced Sunday that the the senator tested positive for coronavirus, while Diaz-Balart and McAdams were confirmed infected last week.

Several who have come in contact with these three have isolated themselves to make sure they have not contracted and don’t continue to spread the disease even further.

Among those self-quarantining is Romney.

‘Since Senator Romney sat next to Senator Paul for extended periods in recent days and consistent with CDC guidance, the attending physician has ordered him to immediately self-quarantine and not to vote on the Senate floor,’ Romney’s office said in a statement Sunday afternoon.

The announcement came about an hour after Paul’s office revealed the senator’s situation.

A reporter at the press briefing told Trump of the senators quarantining themselves, including Senators Romney, Mike Lee of Utah, Cory Gardner of Colorado and Rick Scott of Florida.

When the president cracked his joke about Romney testing positive, saying, ‘Gee, that’s too bad,’ the reporter who informed him about the senator’s self-quarantine asked, ‘Is that sarcasm there, sir?’

‘No, no,’ Trump said, smiling and shaking his head. ‘None whatsoever.’

While Romney’s office added in its statement Sunday that the Utah senator ‘has no symptoms,’ he will ‘be tested.’ 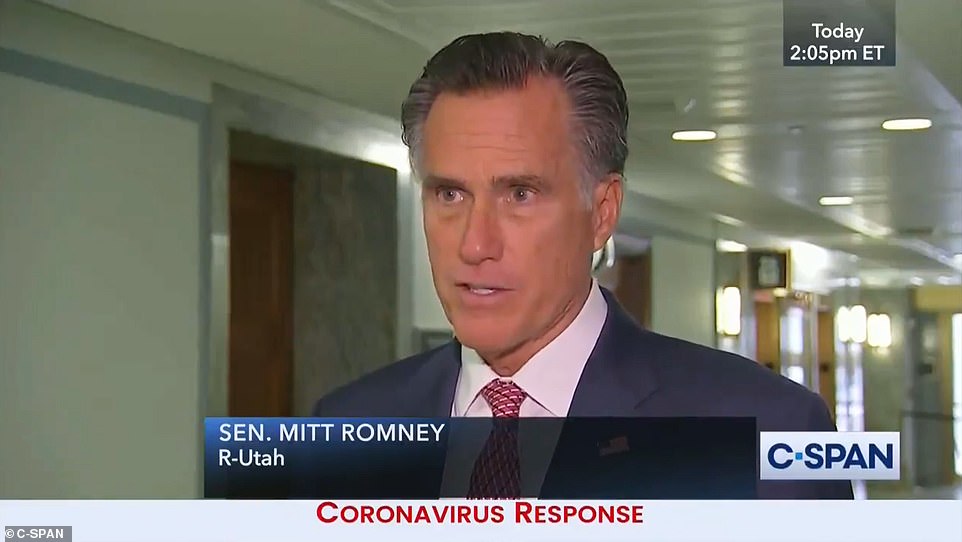 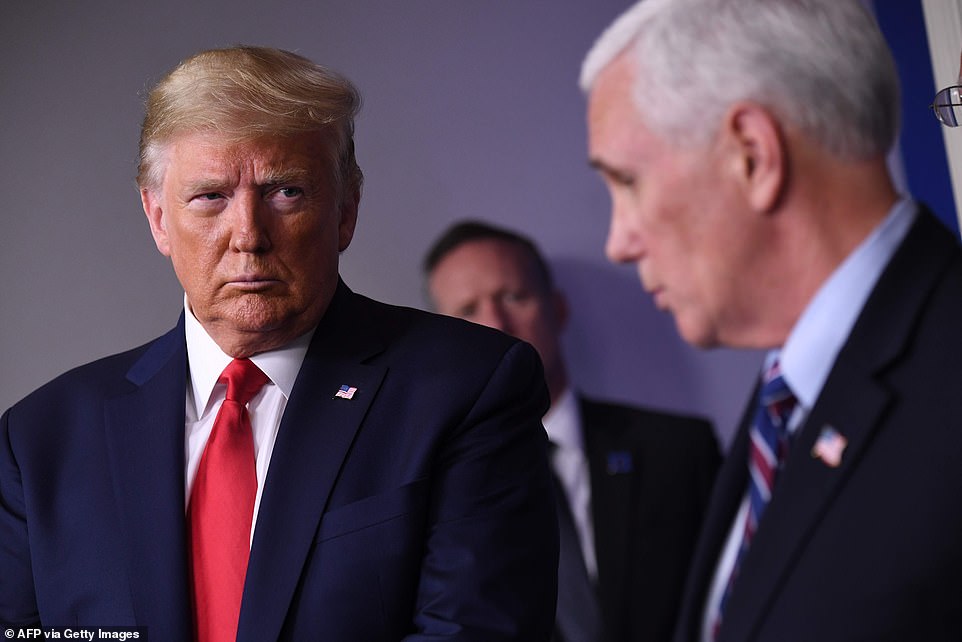 ‘Romney’s in isolation?’ Trump asked a reporter questioning him during the press briefing Sunday. ‘Gee, that’s too bad,’ he quipped

Trump suggested that he was unsure how long some of the lockdowns and isolations would last as coronavirus continues to rock the nation – and claimed even if it’s usually against the Constitution, he feels it would be appropriate to make a temporary exception.

The measure argues that Congress is breaking the guidelines outlined by the Centers for Disease Control and Prevention on social distancing by gathering hundreds of people into the same space for sessions.

Democratic Senator Dick Durbin of Illinois and Republican Senator Rob Portman of Ohio are proposing a similar remote voting resolution on the Senate side of Congress.

‘Yes, it is new,’ Durbin said on the Senate floor of the idea of remote voting. ‘Yes, it is different. Yes, it reflects the 21st century and reflects a challenge the likes of which we have never seen.’

The impact of coronavirus in the U.S. have skyrocketed in the last week to more than 30,200 confirmed cases and nearing 400 deaths.

Romney said Sunday before going into isolation that all senators are now seeking medical advice on how to proceed and are considering self-quarantine after all GOP senators attended lunch with Paul on Friday.

‘Rand Paul has been diagnosed with COVID-19. Wish him the very best. He’s compromised given health conditions he’s had in the past. And so we’ll be praying for him and thinking about it,’ he Utah senator told reporters at the Capitol Sunday, referencing Rand’s previous medical issues following getting jumped by a neighbor in 2017.

The assailant broke five of Paul’s ribs and in August 2019, the senator had to have part of his lung removed as a result of the injuries he sustained during the attack.

‘And, of course, all the senators are going to seek medical advice as to what action we should take to make sure that we don’t, in any way, spread this virus, ourselves,’ he continued.

When asked about the GOP lunch, Romney confirmed Paul attended and suggested he came in close contact with many of the senators.

‘Yes, yes, we were in lunch together with Rand,’ Romney said. ‘Hope he’s doing very well, but we have to determine whether any of us should self-quarantine as a result of being in the same room.’

McConnell said : ‘A rapid injection of cash to help small businesses through this turmoil’

What it means: – Small businesses will be given money to pay THEIR rent and workers

McConnell said: ‘Senate Republicans want to put cash in the hands of the American people’

What it means: – According to the Associated Press individuals will receive $1,200 and couple will get $2,400 plus $500 per child, with some income restrictions

– Treasury Secretary Steven Mnuchin said each household will receive $1,000 per adult and $500 per child within three weeks of the bill passing

McConnell said: ‘Entire sectors are being crushed by public health guidance, which is obviously no fault of their own’

What it means: – Industries will receive money and additional loans, which they must pay back, to help with ongoing costs

McConnell said: ‘This is primarily a health crisis with an economic crisis strapped to its back’

What it means: – The measure will remove barriers to care and speed up innovation, like progress toward on a vaccine