Donald Trump’s campaign canceled his scheduled speech to the outdoor overflow crowd at his Tulsa rally after the supporters failed to materialize and ‘radical protesters’ were blamed for their absence.

An outdoor stage had been set up to accommodate the thousands who will not be able to fit inside the BOK Center, the 19,000 seat arena where the president will speak. The Trump campaign said they had a million requests for tickets. Any one from anywhere can request a ticket online.

But the area outside the arena – six blocks were blocked off by police for the expected crowds – was devoid of people. Both Trump and Vice President Mike Pence’s speeches were canceled by the campaign.

The Trump campaign blamed the protesters for the lack of a crowd.

‘Sadly, protesters interfered with supporters, even blocking access to the metal detectors, which prevented people from entering the rally. Radical protesters, coupled with a relentless onslaught from the media, attempted to frighten off the President’s supporters. We are proud of the thousands who stuck it out,’ Trump campaign communications director Tim Murtaugh said in a statement.

Empty seats were seen inside the BOK Center too as the rally began with an opening round of speakers, including Eric and Lara Trump, Kimberly Guilfoyle, and Diamond and Silk

Empty seats were seen in the BOK Center, which holds 19,000 people; although the campaign handed out face masks, few people were seen wearing them 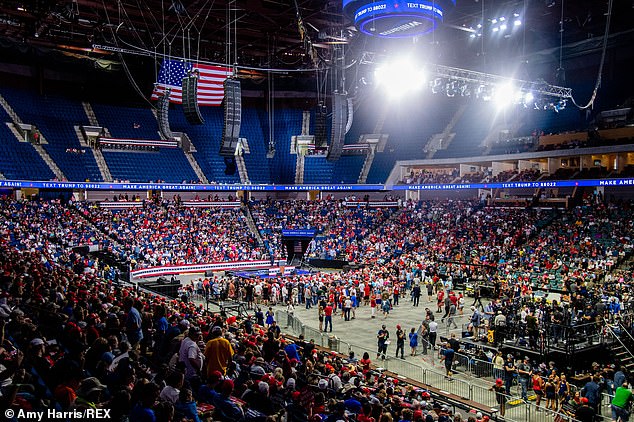 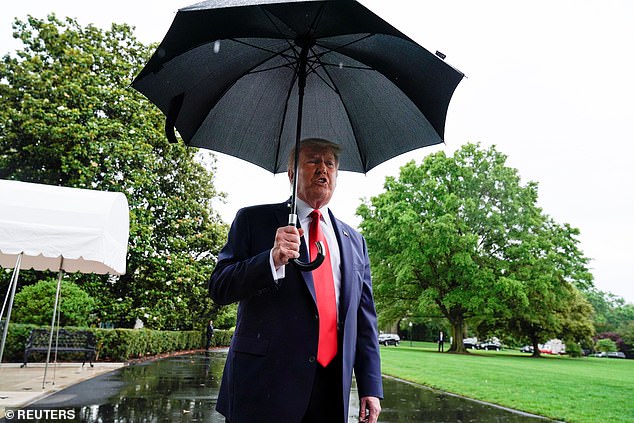 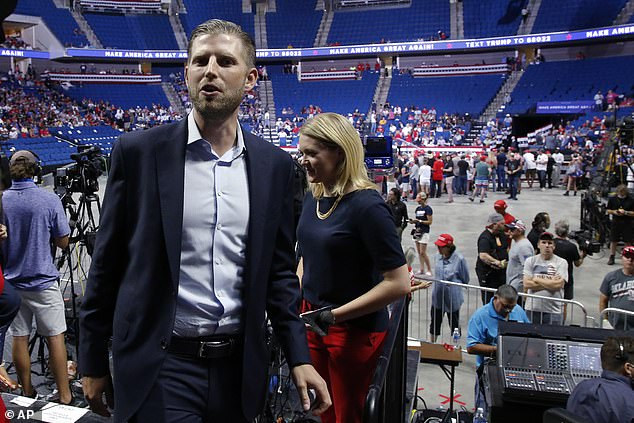 Trump’s son Eric Trump checked out the BOK Center, where the president will speak 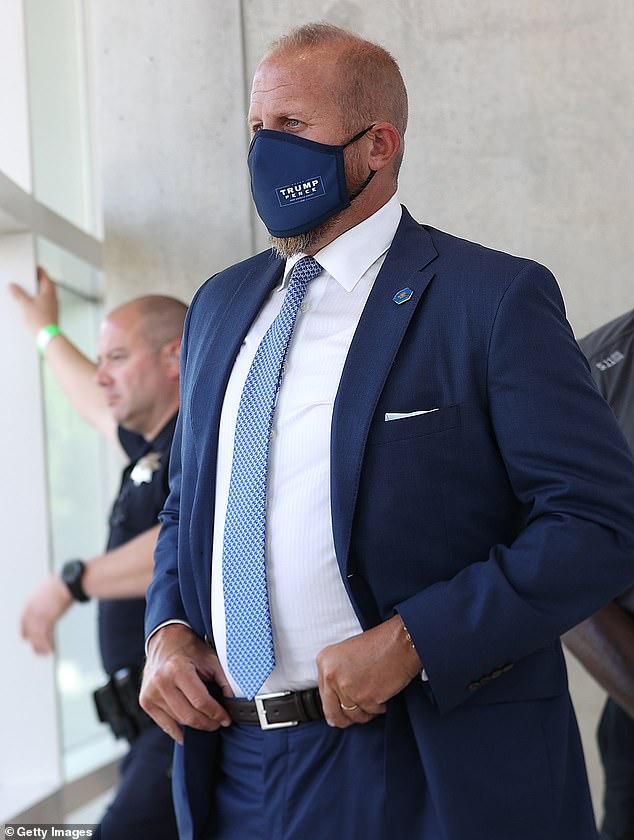 The rally was designed by the campaign to reboot the president’s re-election effort, which was side lined by the coronavirus. Trump’s approval rating tanked based on his handling of the pandemic and of race relations in the wake of the death of George Floyd. Polls showed Democratic rival Joe Biden winning in November.

‘Today is the start of a new chapter and a brand new campaign for President Trump,’ Guilfoyle said in her opening remarks.

The rally was plagued by problems and criticism before it started. Six members of the advance team – the staff that arrive on the ground weeks ahead of time to set up the arena and take care of logistics – tested positive for COVID-19.

‘No COVID-positive staffers or anyone in immediate contact will be at today’s rally or near attendees and elected officials,’ said Murtaugh.

Two of the six were reportedly Secret Service agents.

Oklahoma has seen a spike in coronavirus cases as the state moved through the re-opening process. It is one of the state’s furthest along – in stage three – which is one of the reasons it was picked for Trump’s comeback event. On Saturday, 331 new cases were recorded. Oklahoma set a new state record for COVID-19 increases in a single day on Thursday, confirming 450 new infections. The state has more than 10,000 cases.

Protesters mingled with Trump supporters outside the BOK Center but there were no reports of violence. Trump issued a veiled threat via Twitter on Friday, warning protesters they would be dealt with in a harsh matter.

Many of the demonstrators wore t-shirts or carried signs expressing their support for the Black Lives Matters movement, the protests that sprung up around the country after Floyd died.

The majority of Trump supporters at the event are white.

Members of the Oklahoma National Guard and law enforcement officers were in the secure area around the center – an area that stretched six city blocks. Inside, Trump supporters sold campaign merchandise. Some supporters had camped out overnight to make sure they got inside to hear the president.

Trump was ready to get back out on the trail.

‘We have to get back to living our lives’ Trump told Axios on Friday, adding ‘we’re going to have a wild evening tomorrow night at Oklahoma.’

Attendees had their temperature checked before they went inside as they went through the security line. The campaign handed out face masks but few people inside the BOK Center appeared to be wearing one. 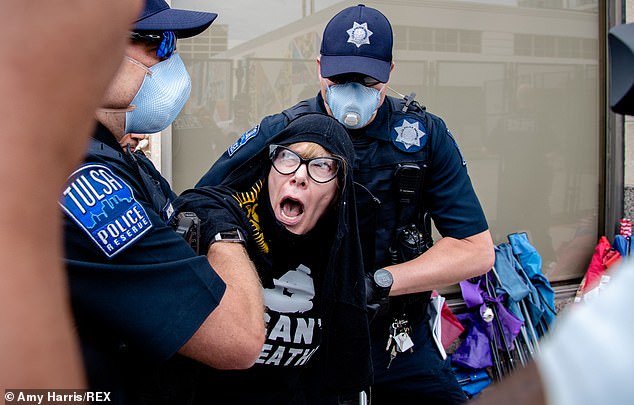 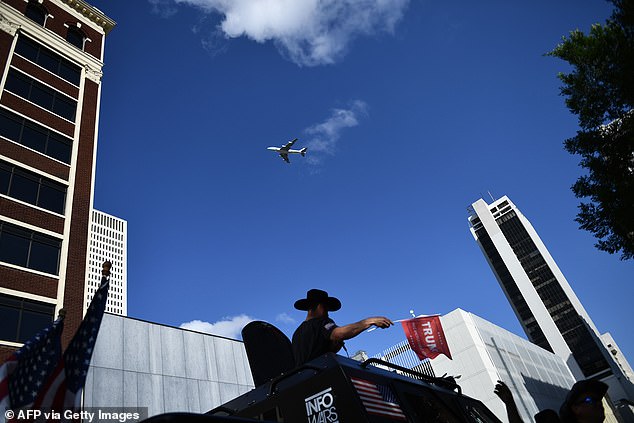 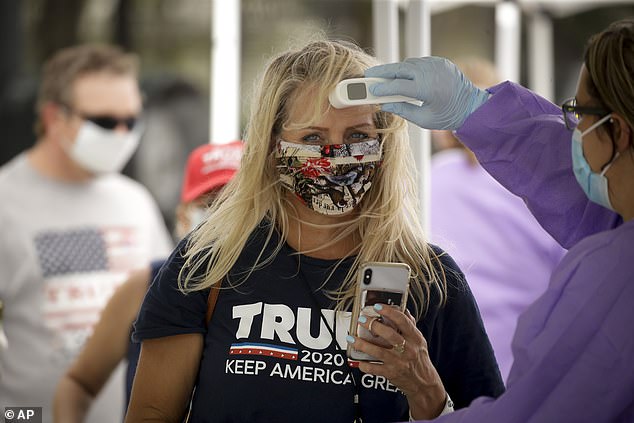 The Trump campaign emphasized the safety measures put in place for the rally, including having temperature checks done before people were let inside 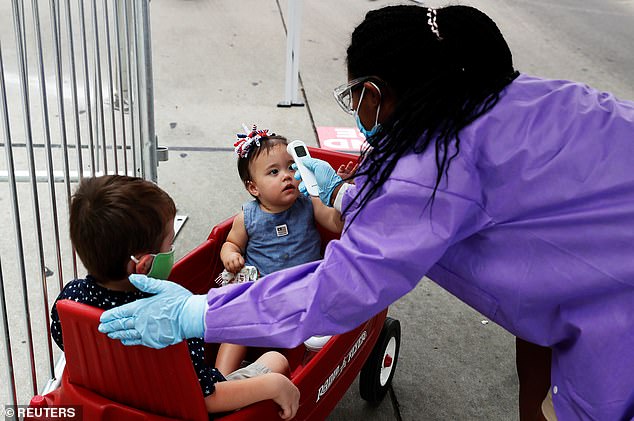 Two children have their temperature checked before entering the BOK Center 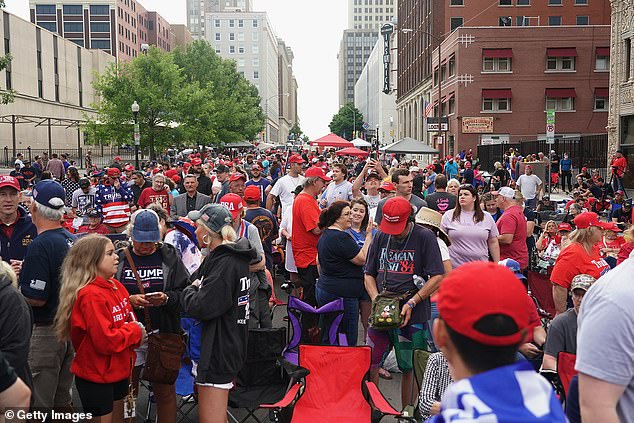 Trump supporters lined up outside the BOK Center, waiting to get inside

Trump campaign manager Brad Parscale was spotted in the stands wearing one. White House press secretary Kayleigh McEnany, who’s traveling to the event, said at her briefing on Friday she would not be wearing one, pointing out she is tested for the coronavirus regularly and that it’s a personal choice for those attending.

Asked about whether people attending the rally should wear face coverings, as is now recommended by the CDC, Trump told Axios: ‘I recommend people do what they want.’

Trump, who has been loath to appear publicly in a mask, said he has no intention of wearing a mask at the rally.

‘You know, there was a time when people thought it was worse wearing a mask,’ he said, referring to earlier guidance from the CDC saying that the general public should not wear masks. ‘I let people make up their own decision.’

Trump’s last rally was March 2 and the country looked vastly different. The economy was strong with the unemployment rate at about 3.5 per cent. The number of coronavirus cases in the U.S. was estimated at 91.

Now, the unemployment rate stands at 13.3 per cent and the number of coronavirus cases stands at about 2.2 million. More than 119,000 people have died.

Trump’s rally has been deeply problematic ever since it was announced on June 10.

It survived a lawsuit by local residents and businesses which tried to get it shut down, citing concerns about the spread of the coronavirus. Local health officials also recommended it be postponed, to no avail.

The original date of Friday, June 19, was switched to Saturday after an uproar about the clash with Juneteenth – the annual celebration marking the end of slavery.

The anger at the date – which takes place on the holiday celebrating the end of slavery – meant that the rally got off to a bad start.  Critics pointed to the Trump’s administration handling of protests that sprung up around the country in the wake of George Floyd’s death.

Tulsa was the site of one of the country’s bloodiest outbreaks of racist violence in 1921. Called the Tulsa Race Massacre, as many as 300 people were killed, more than 10,000 remained homeless, and, according to the Tulsa Race Riot Report of 2001, an estimated $1,470,711 was incurred in damage – equal to about $20 million today.

Trump has show some insensitivity on race relations. He also bragged he made ‘Juneteenth very famous’ in an interview with The Wall Street Journal. He also admitted he learned about it from a black Secret Service agent and was surprised to hear the White House had put out a statement on the holiday last year.

‘I made it famous. I made Juneteenth very famous,’ he told the newspaper. ‘It’s actually an important event, it’s an important time. But nobody had heard of it. Very few people have heard of it. Actually, a young African-American Secret Service agent knew what it was. I had political people who had no idea.’ 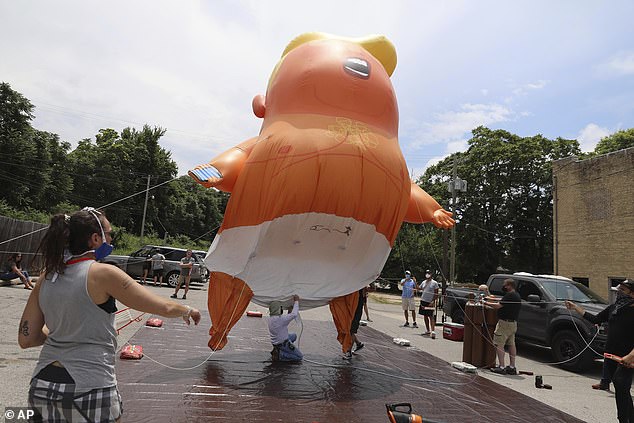 The Baby Trump blimp, a symbol used by Trump protesters, was sighted 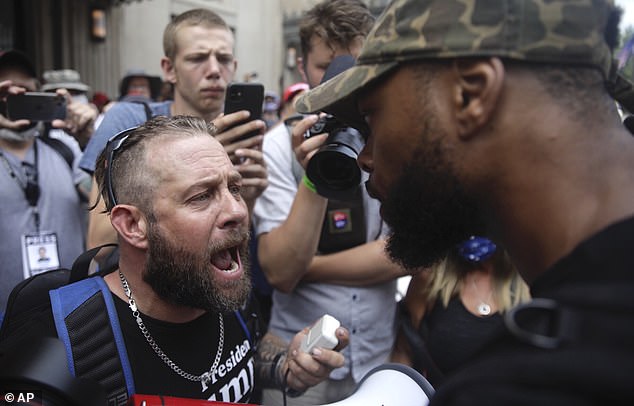 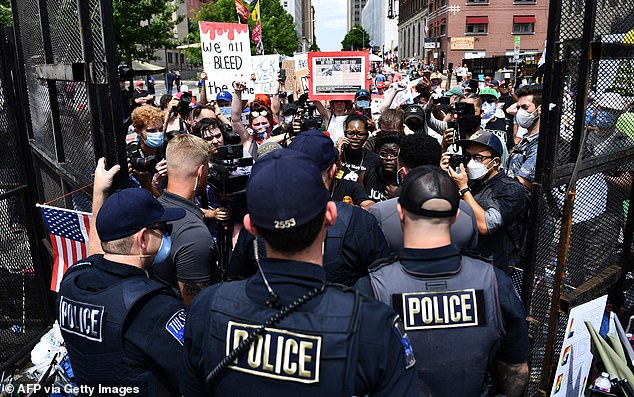 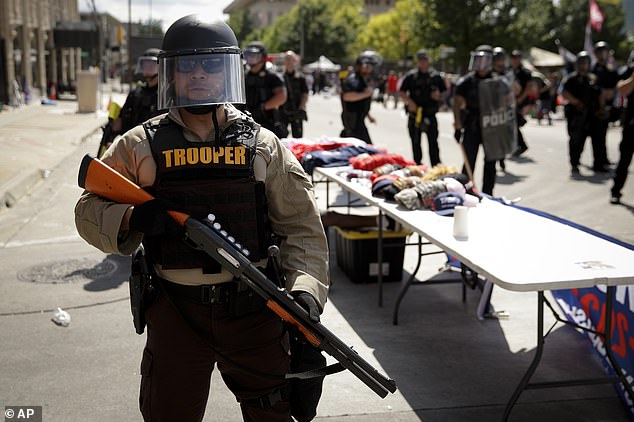 A trooper stands outside the BOK Center

Oklahoma also was chosen for its Republican support – Trump carried the state by 36 points in the 2016 election. Additionally Tulsa has a Republican mayor. Most cities in the country are run by Democrats.