President Trump says his campaign kickoff next week in Florida will be the ‘”hottest”‘ rally he’s ever held – after nearly four times the number requests came in for seats his campaign is able to fill.

Trump promoted the rally on Wednesday morning that’s taking place in a week in the Sunshine State, where temperatures are expected to be in the high ’80s while his supporters are waiting in line.

‘Wow! Just got word that our June 18th, Tuesday, ANNOUNCEMENT in Orlando, Florida, already has 74,000 requests for a 20,000 seat Arena. With all of the big events that we have done, this ticket looks to be the ‘hottest’ of them all. See you in Florida!’

Trump sent the tweet amid a flurry of complaints about a report that he instructed aides to lie about support for his reelection bid in battleground areas.

The New York Times claimed that internal polling had Trump down in Texas, Pennsylvania and Michigan.

Trump’s campaign denied that it had been asked to lie and argued that survey, which leaked in part to the media, asked narrowly-tailored questions that reflected the current political landscape and not the conditions of the general election.

The president chimed in on Wednesday morning to claim that the surveys his campaign took were ‘fake polls’ and the media was reporting ‘Fake numbers that they made up & don’t even exist.’

He’d claimed as he spoke to reporters on Tuesday: ‘My poll numbers have been very, very good. We’re starting, really, next week. It’s going to be something, I think, very special. We’re starting in Orlando, Florida.’

Trump has been campaigning for reelection under the slogans “Keep America Great!” and “Promises made, promises kept” for the last year. His Orlando event will be the first rally since he was elected that will reunite him on stage with his wife, his vice president, and the VP’s wife in a traditional capacity.

A May 31 announcement from the campaign said Trump ‘will announce his second term presidential run with First Lady Melania Trump, Vice President Mike Pence, and Second Lady Karen Pence on June 18th in Orlando, Florida, at the 20,000 seat Amway Center. Join us for this historic rally!’

The event is being held at Orlando’s Amway Center, which has a max capacity of 20,000 people for sporting events. For a rally like Trump’s the campaign usually fills additional floor space with standing supporters to expand the number of attendees it can accommodate. Sometimes it’s not enough, and the campaign has to broadcast to an overflow room. 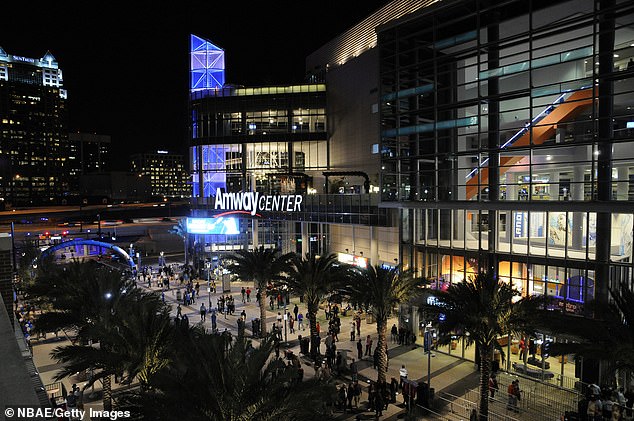 The event is being held at Orlando’s Amway Center, which has a max capacity of 20,000 people for sporting events

At a Texas rally last year, when the campaign said 100,000 people RSVP’d for a Houston rally, supporters of the president camped out overnight for a chance at limited seating in the indoor arena. That line stretched across five city blocks.

The U.S. president has taken to mocking his Democratic competitors for their inability to fill arenas with their backers.

Former Vice President Joe Biden, in particular, has struggled to draw large crowds. His campaign kickoff event in Philadelphia had an estimated crowd count of 6,000 people. The outdoor event was his largest rally yet.

Trump seized on the comparatively low turnout at a rally in Montoursville two days later.

California Democrat Kamala Harris and Vermont Sen. Bernie Sanders are the only candidates who’ve held rallies that came close to the max capacity for a Trump event.

Harris’ campaign kickoff in Oakland had an estimated attendance of 20,000 people, and Sanders held several rallies in 2016 that met the marker. His opening act in 2019 Brooklyn, New York, had a crowd count of 13,000 people, his campaign said.