Trump claims coronavirus might have been spread INTENTIONALLY by China

Donald Trump claims coronavirus might have been spread INTENTIONALLY by China, calls testing ‘overrated’ and says he objects to masks because people fidget with them

President Trump claimed China may have spread coronavirus intentionally, called COVID-19 testing ‘overrated’ and explained his beef with mask-wearing in a new interview with The Wall Street Journal.

‘There’s a chance it was intentional,’ Trump said of the coronavirus spread that started in Wuhan and traveled around the globe earlier this year.

Without providing any evidence, the president speculated China may have had economic motivations letting the virus escape.

In a new interview with The Wall Street Journal, President Trump said China might have intentionally let out the coronavirus, while calling COVID-19 testing ‘overrated’ and explaining why he wasn’t a fan of masks 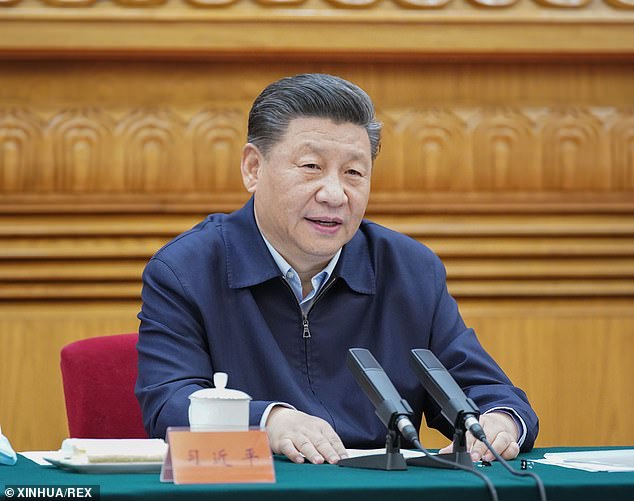 President Trump alleged that China could have purposely let loose the coronavirus to hurt the American economy. Here Chinese President Xi Jinping is photographed in Beijing on June 2

‘Correct, they’re saying, man, we’re a mess. The United States is killing us. Don’t forget, my economy during the last year and a half was blowing them away. And the reason is the tariffs,’ Trump told The Journal.

He said he didn’t have intelligence reports to back up the claim, adding that there was a better chance it was Chinese incompetence or a mistake.

‘I don’t think they would do that,’ Trump then said. ‘But you never know. But it has had an impact.’

China tested nearly 11 million people in Wuhan, the city where the first outbreak occurred, when a secondary wave of cases cropped up.

Trump said he had no plans to do testing in the U.S. at this level.

‘I personally think testing is overrated, even though I created the greatest testing machine in history,’ Trump boasted.

Critics have hit Trump for not nationalizing the country’s testing strategy and deploying the Defense Production Act too slowly to force companies to create products like testing swabs.

‘In many ways, it makes us look bad,’ Trump said, again suggesting that overzealous testing is the reason why coronavirus cases continue to grow in some parts of the U.S.

Dr. Anthony Fauci, the country’s top infectious disease expert and a member of the White House’s coronavirus taskforce, said earlier this week additional testing is not the reason why there’s a larger percentage of cases in some states.

Fauci said the uptick ‘cannot be explained by increased testing.’

During the course of the interview, Trump also connected Americans’ mask-wearing habits to their political leanings, telling The Journal that those who opted to cover their face disapproved of the president.

But Trump said his main concern with pushing Americans to wear masks is that he believed they made people more likely to become infected with COVID-19.

While his own government recommended sporting masks to slow the spread of the disease, Trump countered that by pointing out how people fidgeted when wearing masks.