Donald Trump said Monday that the bottom has dropped out of public support for impeaching him, making the improbable claim that less than 30 per cent of Americans favor it.

‘Support for Impeachment is dropping like a rock, down into the 20’s in some Polls,’ the president tweeted.

He used a quiet pre-holiday morning to blast Democrats in Congress for sidelining his U.S. Mexico Canada Agreement, a trade package that the White House has yet to formally send to Capitol Hill.

There don’t appear to be any publicly released polling data that support Trump’s contention that impeachment has become wildly unpopular in general. Independent voters, however, do line up with the surprising number in his tweet.

There are no published polls with impeachment support under 43 per cent, but one recent survey shows just 23 per cent of independent voters favor it

An Emerson College poll of Americans from November 17 to November 20 found just 23 per cent of independents want him impeached.

Of the 41 published polls on impeachment since pollsters started asking the question regularly in September, the Emerson survey was just the second to find more opposition than support. It was just a two-point gap, 45–43, tilted against impeaching the president.

Thirty-nine of the polls have generated Trump-unfriendly results.

On average, according to an index maintained by Real Clear Politics, 48 per cent of voters in recent published polls favor impeachment while 44.7 per cent oppose it.

Trump has complained repeatedly that his USMCA trade deal is no closer to congressional approval as leaders in the Democratic-led House of Representatives maintain a near-singular focus on impeachment hearings.

Congress is in recess this week and members are expected to work just two weeks of December at the U.S. Capitol.

Some Democrats are whipping up a frenzy among their constituents, promising an embarrassing end to the impeachment process.

Nevada Rep. Dina Titus told a crowd in her home state that she wants to ‘impeach the bastard right now.’

The Emerson poll sampled the opinions of more than 1,000 registered voters. 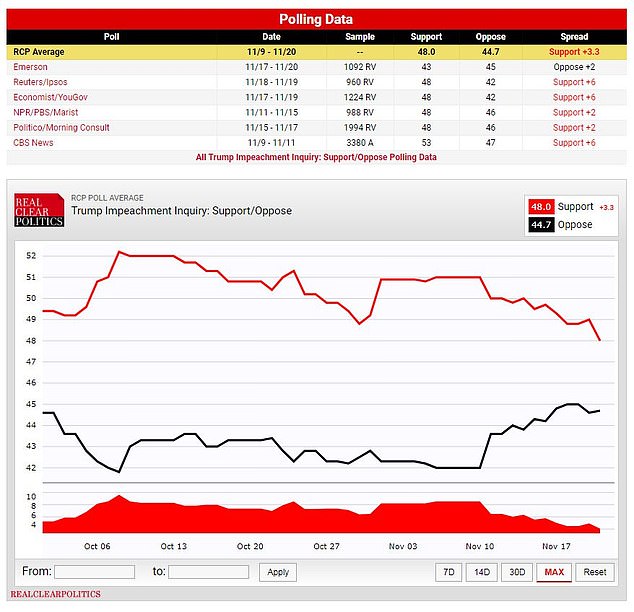 A polling average maintained by Real Clear Politics shows impeachment support headed in the right direction for Trump but still ‘under water’with 48 per cent in favor and 44.7 per cent opposing