‘Yes, I think it’s great,’ Trump told Fox News in an interview with Steve Hilton, when he asked for his thoughts about the new ‘normal’ of Buttigieg and his spouse appearing at campaign events together.

‘I think that’s something that perhaps some people will have a problem with. I have no problem with it whatsoever. I think it’s good,’ Trump said.

President Donald Trump told Fox News in an interview that he thinks it’s ‘great’ openly gay presidential candidate South Bend, Indiana Mayor Pete Buttigieg can appear on stage with his husband and it be ‘normal’ 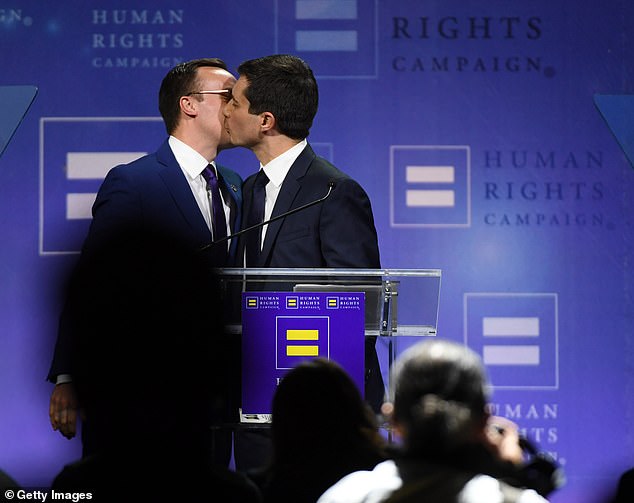 Buttigieg (right) appeared with his husband, Chasten (left), at the Human Rights Campaign Gala over the weekend, and the two kissed on stage after the candidate delivered a keynote address

Buttigieg, the mayor of South Bend, Indiana, has been married to his husband, Chasten, since June 2018.

The two appeared on stage together at the Human Rights Campaign’s 14th annual Gala in Las Vegas over the weekend, where they shared a kiss in front of the audience after Buttigieg delivered the event’s keynote speech.

Trump has recently begun calling the candidate ‘Boot Edge Edge,’ a playful reading of his last name delivered in a mocking tone.

Earlier this week the president said he thought the Democratic race was down to just four contenders, with ‘Boot-Edge-Edge’ being one of them.

He also mentioned independent Vermont Senator Bernie Sanders, referring to him as ‘Crazy’ Bernie; former Vice President Joe Biden, who he calls ‘Sleepy’ Joe; and also said former Texas Representative Beto O’Rourke, or ‘Reboot’ Beto, could have a shot at the nomination.

Hilton noted that gay marriage remains a divisive topic in the U.S. Vice President Mike Pence has long opposed the relatively new institution, building his bona fides in Indiana as a conservative governor there.

Buttigieg’s brother-in-law is also not a fan of the two’s unconventional marriage. 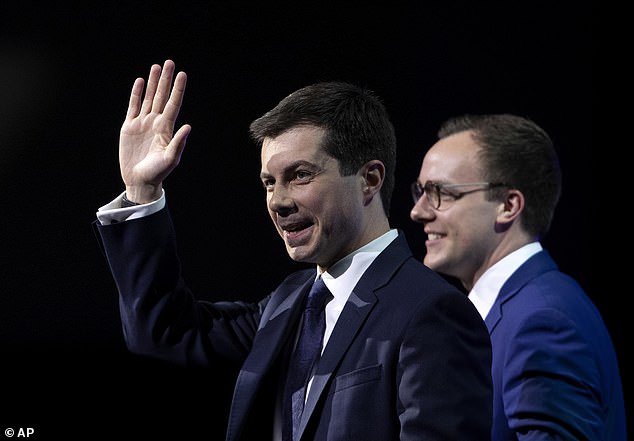 ‘I want the best for him, Chasten’s brother Rhyan has said. ‘I just don’t support the gay lifestyle.’

Buttigieg has embraced the rigors of the presidential campaign trail, taking questions from reporters at nearly every stop.

A former long-shot candidate, the calm, understated Indianan swiftly rose in the ranks among the crowded field of Democratic contenders, and averages 6.8 per cent support among Democratic primary voters.

The field grew to 24 candidates on Thursday when New York City Mayor Bill de Blasio announced he would also vie for the party’s nomination in 2020.

‘It’s not like we’re in first place,’ he told reporters on Thursday, adding that he is ‘thrilled with the fact that we are obviously running ahead of a lot of better-known competitors and got a lot of favorable attention.’

But the presidential sweepstakes ‘is a long run,’ he said. ‘This is a marathon. We’ve got a long way to go. We are frankly ahead of where I hoped to be. But now we are right where I want to be.’