President Trump denied having Parkinson’s in the face of questions about his health after he tip-toed down a ramp at West Point last weekend.

‘I stayed there for hours. And what do I do? I get publicity about walking down a ramp,’ said a Trump aghast by the media coverage, in an interview with The Wall Street Journal. ‘And does he have Parkinson’s? I don’t think so.’

The president explained that he walked daintily down the ramp due to wearing leather-bottom shoes, adding ‘and then the last 10 feet I ran down.’

In a new interview with The Wall Street Journal, President Trump blamed his slow walk down a West Point ramp on wearing leather-bottom shoes. He also said he doesn’t have Parkinson’s disease, as critics speculated about his health 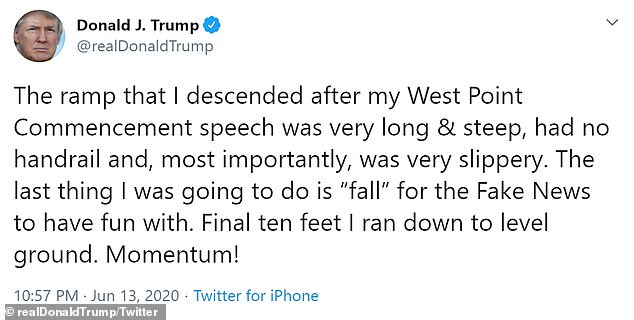 In an initial tweet about the incident, which took on the name ‘ramp-gate,’ Trump described the ramp as being ‘very long & steep,’ adding that it ‘had no handrail and, most importantly, was very slippery.’

‘The last thing I was going to do is “fall” for the Fake News to have fun with,’ the president said. ‘Final ten feet I ran down to level ground. Momentum!’ he added.

He didn’t mention his shoes.

During his interview with The Wall Street Journal’s Michael Bender, Trump said he was wearing the same pair.

‘I can show them to you if you like,’ he offered the reporter.

At the same event, Trump was also criticized for drinking water with both hands.

The Lincoln Project, part of the effort by Kellyanne Conway’s husband George and other so-called ‘never-Trumpers’ to push Trump from the White House, put out an attack ad with the theme #TrumpIsNotWell.

Bender later remarked that Trump may be under fire for his health because his campaign has attacked his Democratic rival Joe Biden in a similar manner.

‘Well, I’m four years younger,’ the president, who turned 74 earlier this week, interjected. ‘But no, it’s not Biden’s age, I know people that are much older than me. And they’re sharp as they were when they were 25. I know a man who’s 92, is 100 per cent sharp,’ Trump said.

He pointed to prominent, old Republicans including mega-donor Sheldon Adelson, who is 86.

Again focusing on the media coverage, Trump talked about how an op-ed in The Washington Post sided with him.

The president often criticizes The Post for being too liberal.

‘It wasn’t his health, it was politics,’ the president told Bender, repeating the crux of writer Henry Olden’s argument.

‘This was one of the great shockers of all time,’ Trump told Bender. ‘Do you want it? You don’t need it, right?’ he asked the reporter.