President Donald Trump’s health has been questioned by critics after he appeared to struggle lifting a glass of water and descending a staircase at his graduation speech at West Point.

During the speech on Saturday, Trump started to lift the glass with his right hand but seemed unable to guide it all the way up to his lips, using his left hand to steady the glass.

It is not the first time Trump has used two hands to sip from a cup of water, an odd tic that has led some to question whether he has a medical issue.

‘This is a persistent neurological sign that, combined with others, would be concerning enough to require a brain scan,’ Dr. Bandy Lee, a Yale psychiatrist, wrote on Twitter in response to the West Point footage. 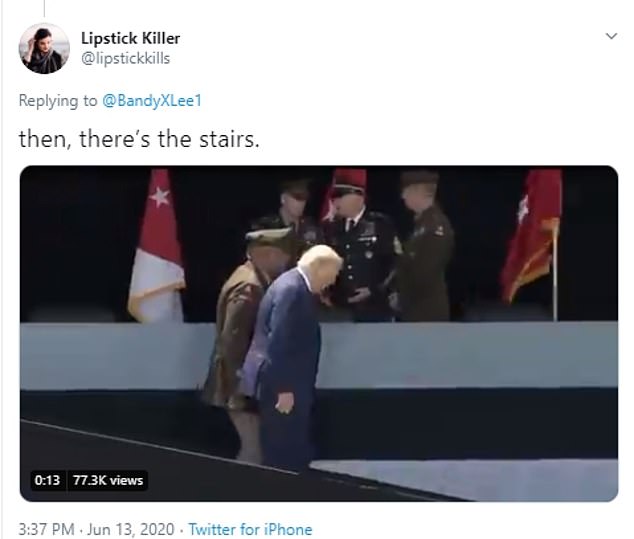 Descending the stairs after his speech, Trump appeared unsteady as he looked down at his feet and crept slowly down the steps.

‘Recent videos make it clear that there is something medically wrong with Trump. The way he walks, how he holds a glass of water, his slurred words, his lapses in thought. What is the White House hiding?’ tweeted Jon Cooper, a top fundraiser for Joe Biden.

Trump insists he is in perfect health and the White House recently released an annual physical that claimed he is in good shape for his age. He turns 74 on Sunday.

Trump’s habit of sipping water with two hands has been noted since at least 2017, when he cradled a glass while delivering his national security strategy in front of military service members in Washington, D.C.

In another 2017 speech, Trump gulped from a water bottle with two hands while touting a trade deal with Japan. 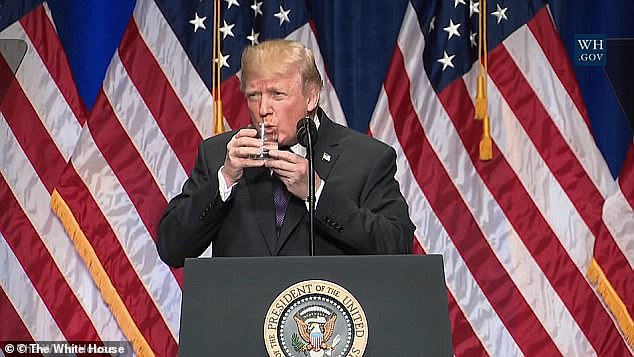 Trump is seen cradling a glass in 2017 while delivering his national security strategy in front of military service members in Washington, D.C. 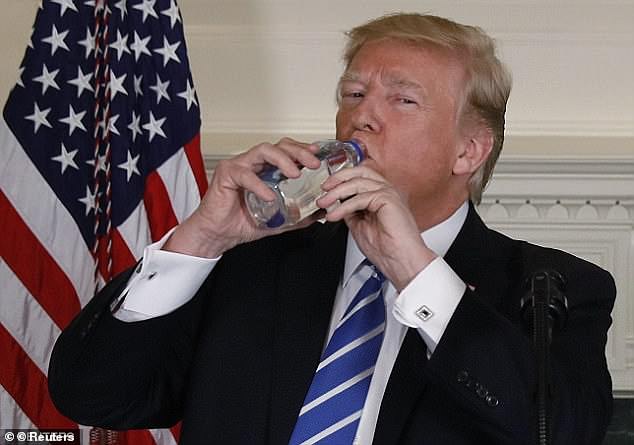 In another 2017 speech, Trump gulped from a water bottle with two hands while touting a trade deal with Japan

On Saturday, Trump urged West Point’s graduating class Saturday to ‘never forget’ the legacy of soldiers before them who fought a bloody war to ‘extinguish the evil of slavery.’

Trump’s appeal to remember history came as his own relationship with the military is under strain from the unrelenting criticism he and Pentagon leaders have faced over their response to protests that erupted after George Floyd´s death in Minneapolis.

It also came hours after Trump made what amounted to a rare concession for him: He rescheduled a campaign rally planned for Tulsa, Oklahoma, on June 19. The day marks the end of slavery in the U.S., and Tulsa was the scene of a fiery white-on-black attack in 1921.

‘What has historically made America unique is the durability of its institutions against the passions and prejudices of the moment,’ Trump told more than 1,100 graduates at an unusual outdoor ceremony held during a pandemic.

‘When times are turbulent, when the road is rough, what matters most is that which is permanent, timeless, enduring and eternal.’ 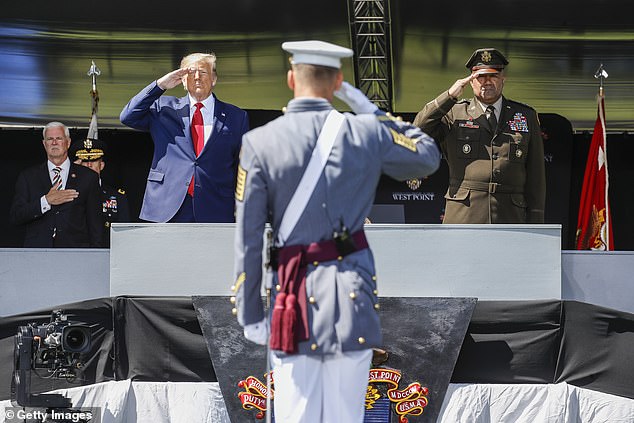 Trump and United States Military Academy superintendent Darryl A. Williams salute alongside graduating cadets as the national anthem is played during commencement ceremonies 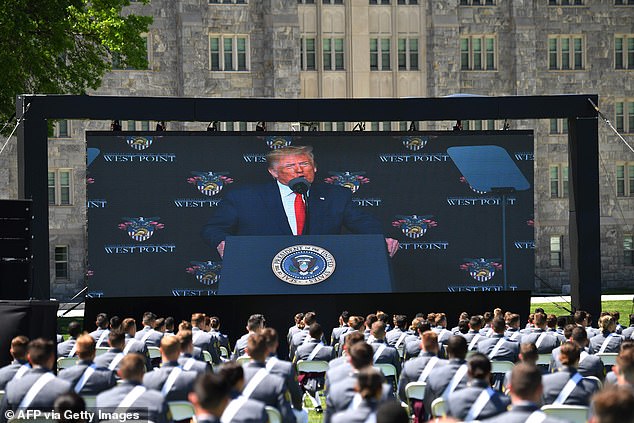 In the past two weeks, Trump has yelled at Defense Secretary Mark Esper for publicly opposing his call to deploy active-duty troops to quell the protests stemming from the killing of Floyd, who was black, by a white Minneapolis police officer.

During the commencement ceremony, protesters denounced the president from boats and kayaks along the nearby Hudson River.

‘It was on this soil that American patriots held the most vital fortress in our war for independence,’ Trump said. He said the U.S. Military Academy ‘gave us the men and women who fought and won a bloody war to extinguish the evil of slavery within one lifetime of our founding.´´

‘This is your history. This is the legacy that each of you inherits,’ Trump continued, adding that it was bought with American blood spilled in battle. ‘You must never forget it.’

Trump, however, was incorrect to say women had been trained at West Point for the anti-slavery fight; they were not allowed to become cadets until 1976.

In the speech, Trump leaned into his ‘America first’ brand of foreign policy without uttering the phrase, telling the Army’s newest officers their job is ‘not to rebuild foreign nations, but to defend and defend strongly our nation from our foreign enemies.’

‘It is not the duty of U.S. troops to solve ancient conflicts in faraway lands that many people have never heard of.’ He said America is not the ‘policeman of the world,’ but warned adversaries that it will ‘never, ever hesitate’ to act when its people are threatened.

He thanked those in the military who helped the country respond to the coronavirus, once again calling it an ‘invisible enemy’ from China. 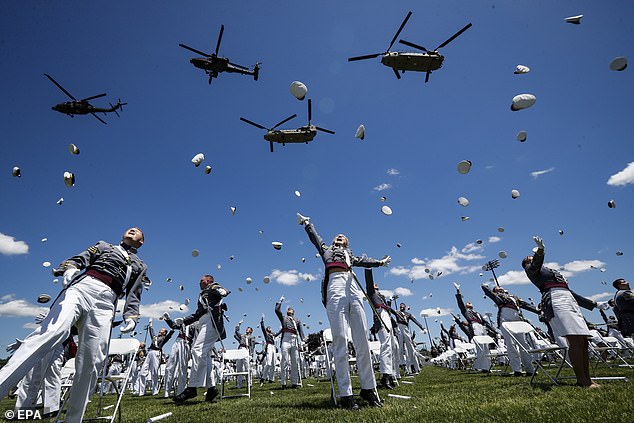 At the end of the ceremony, five hulking helicopters flew low and slow over the field as the graduates tossed their white dress caps into the air 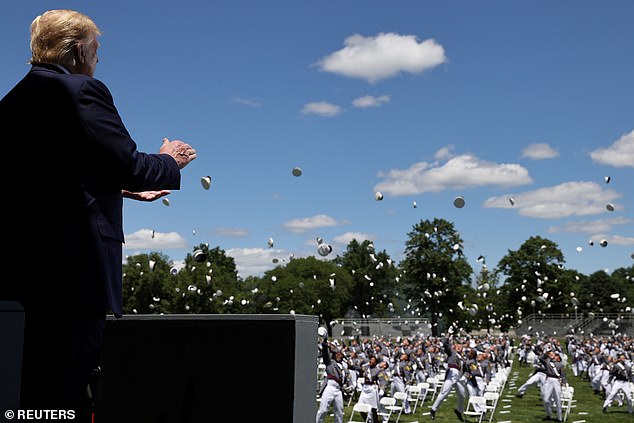 The president stressed the unity of a graduating class that came ‘from every race, religion, color and creed.’ The class also includes citizens of 11 other countries, including Bosnia-Herzegovina, South Korea and Tanzania.

Trump highlighted bigger defense budgets under his watch but falsely said he had destroyed 100 percent of the Islamic State caliphate in the Middle East; the group still poses a threat to the U.S. He noted he had directed the killing of two terrorist leaders and had created the Space Force.

Trump also remembered a cadet who died in an accident last year and whose father is a Secret Service agent, and noted that both he and the Army share a birthday Sunday. Trump will turn 74, while the Army marks its 254th year of existence.

Esper did not attend, but emphasized the principles of duty, honor and country in a video message, saying they will help guide the new officers ‘in challenging times and in the face of new and emerging threats.’

Trump’s appearance at West Point had been criticized as a political move that would put the graduates at risk since the academy is located up the Hudson River from New York City, the epicenter of the U.S. coronavirus outbreak.

The Army defended the move, saying the cadets had to return to campus anyway for final medical checks, equipment and training. They had been home since spring break in early March..

For the ceremony, the newly commissioned second lieutenants wore face masks as they marched onto the parade field, but removed them after sitting for the socially distant ceremony required by the pandemic.

Instead of shaking hands with the president, they exchanged salutes. Family and friends were not allowed to attend and had to watch online.

At the end of the ceremony, five hulking helicopters flew low and slow over the field as the graduates tossed their white dress caps into the air.