Ohio Gov. John Kasich said Wednesday that he was open to a variety of paths to the presidency, should he decide to run in 2020.

‘All of my options are on the table,’ Kasich told reporters at an event he appeared at alongside former California Gov. Arnold Schwarzenegger in Los Angeles, according to Politico.

Kasich, a Republican who formerly competed in the 2016 GOP primary, noted how ‘the Republican Party is my vehicle. It’s never been my master.’

Ohio Gov. John Kasich told reporters Wednesday that ‘all my options are on the table’ for the 2020 cycle, which suggests he’d take on President Trump in a Republican primary, or consider running as an independent 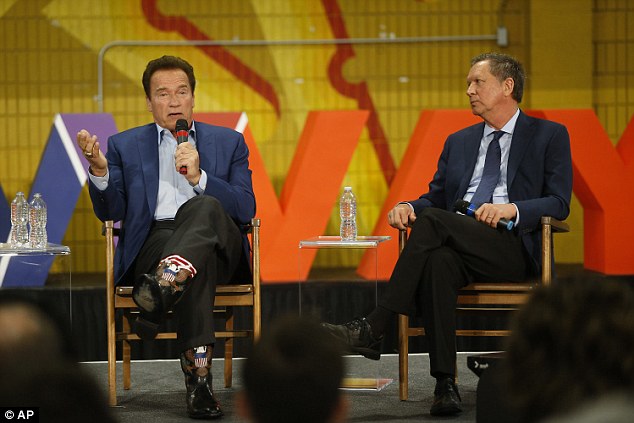 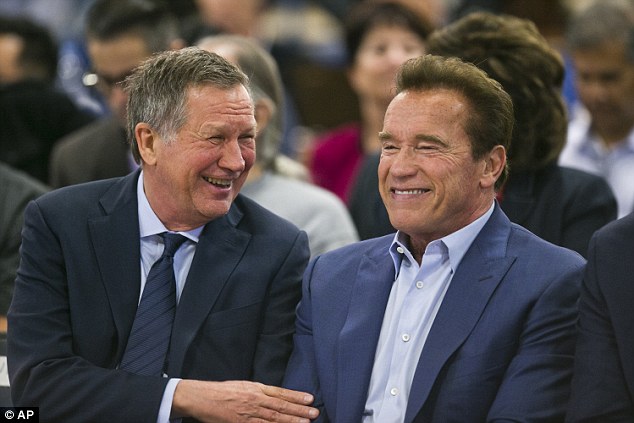 Ohio Gov. John Kasich (left) and former California Gov. Arnold Schwarzenegger (right) both believe the GOP would be better if it became more moderated and Republicans compromised more with Democrats

Both he and Schwarzenegger, who supported Kasich’s presidential bid, have been among the handful of Republicans never to re-align themselves with Trump.

They were attended the New Way California Summit, hosted by a group trying to remake California’s GOP.

At the event, Kasich said it was his ‘job to lead the party.’

The governor was asked then if he had ruled out running as an independent. He replied that he hadn’t.

‘But I’m a Republican, I’m a conservative, and I just want to add to the public debate and do a good job,’ Kasich said.

‘I’m not ruling anything in or out,’ the governor added.

Kasich could also run against Trump – who’s already announced his re-election bid, even hiring a campaign manger – as a Republican in the next set of primaries.

Sen. Jeff Flake, a retiring Arizona Republican who has also played the role of thorn-in-Trump’s-side, said on Sunday he hoped that some Republican would challenge the sitting president in the primary.

On CNN’s State of the Union Flake said there was a ‘crying need out there for some Republicans to stand up and say, this is not normal, this is not right.’

Flake believed that it would be ‘extremely difficult to defeat the president right now if the election were held in a Republican primary.’

He added, however, that a bruising midterm in 2018 might do the trick.

‘This is the Trump party right now. I just am not sure that it will be two years from now,’ Flake said.

‘I’m not ruling it out, but I certainly am – I think the odds are long that I would do it,’ the Arizona senator said.

He added that, ‘People want to remember the Republican Party as a decent party. And it is not right now.’

Kasich and Schwarzenegger believed the pathway to that was a GOP that was more compromising and moderate.

In Los Angeles, Kasick looked back on the presidency of former California Gov. Ronald Reagan, who was considered a conservative in his time, but now looks moderate in comparison.

And unlike Trump he was ‘very welcoming of immigrants,’ Kasich said.