Trump gets a Republican primary challenger as former Massachusetts Gov. Bill Weld soft-launches 2020 campaign while saying president is ‘too unstable’ to be re-elected

A former Massachusetts governor who ran for vice president in 2016 as a libertarian said Friday morning that he is launching a committee to explore a Republican run against Donald Trump next year.

‘Our country is in grave peril,’ William Weld told an audience in the early primary state of New Hampshire, clad in a business suit and brown work boots – a common sight in the snow-blanketed American northeast.

‘Our president is simply too unstable to carry out the duties of the highest office in the land. He’s simply in the wrong place,’ he said, appearing at an event in the New Hampshire Institute of Politics’ influential ‘Politics and Eggs’ speaker series.

Weld’s entry into the race marks the first direct head-on challenge to Trump. A Republican National Committee spokesman did not immediately respond to a request for comment. 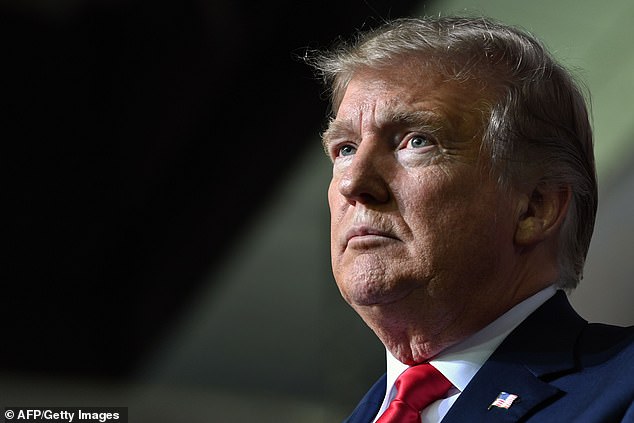 Weld said Trump is ‘too unstable’ to continue in office for another six years; although he ran for vice president in 2016 as a libertarian, Weld is now once again a Republican

Trump, he said, ‘acts like a schoolyard bully, except of course when he is around other bullies, like Mr. Putin. And then he turns ingratiating, all smiles, kicks the American press out of the Oval Office, and has his summit meeting with Mr. Putin with no news media present except TASS.’

‘We have a president whose priorities are skewed toward promotion of himself rather than toward the good of the country,’ Weld jabbed.

‘The country is in grave peril.’

He outlined a series of conservative positions that have the potential to roil what he called ‘the president’s culture of divisiveness in Washington.’

Weld argued for shuttering the federal Department of Education, decriminalizing marijuana possession and use, eliminating trade tariffs and rejoining the Paris climate change accord that Trump withdrew the U.S. from last year.

But mostly he stood Friday as an anti-Trump contrarian, holding himself out as a tool for saving the United States if not the GOP. 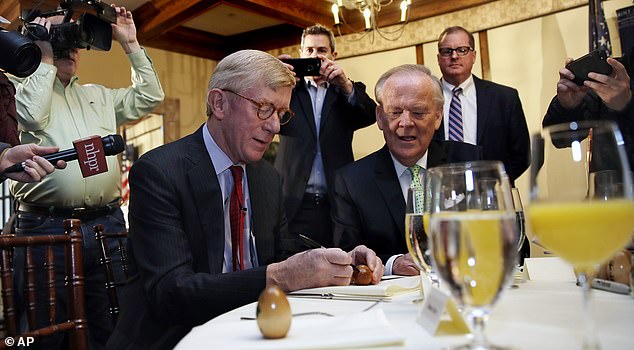 ‘It’s no one thing,’ he said of his anti-Trump sentiments. ‘It’s a series of actions, and I would describe them as antics. And if th president is re-elected that means we’re looking at six more years of this.’

Reflecting on the potential international consequences of Trump continuing to control America’s nuclear launch codes, he declared: ‘It aint’ pretty.’

Weld wouldn’t say whether he would support Trump in 2020, should the president win renomination at the GOP’s convention in Charlotte, North Carolina.

‘I find the current incumbent a difficult act to swallow. I’m not sure,’ he said.

He added that other Republicans might join the race now that he has broken through and promised to appear ‘often’ in the Granite State.

It’s ‘important that the incumbent be challenged, even confronted,’ he said.