Trump has narrowed the gap with Biden, poll shows

Trump has narrowed the gap with Biden with the Democratic challenger’s lead shrinking to just one point in 15 key election battleground states, poll shows

A new national poll has found that Donald Trump has narrowed the gap with his political rival, Joe Biden.

The survey, carried out from August 12-15, found that Democratic candidate Joe Biden and his running mate, Sen. Kamala Harris had a 4-point advantage over Trump and Vice President Mike Pence at 50%-46%.

The 4-point advantage given to the Democrats was on the cusp of the poll’s margin of error of plus or minus 4 percentage points.

A new national poll has found that Donald Trump has narrowed the gap with his political rival, Joe Biden. Above, Trump pictured during a press conference in New Jersey

Yet among the 72% of voters who say they are either extremely or very enthusiastic about taking to the polls in November, Biden’s advantage over Trump widens to 53% to 46%.

The CNN survey indicated that Biden has a smaller lead over Trump than previous polls have shown.

The survey’s results were published on Sunday and comes ahead of the two parties’ major political conventions.

The gap is narrower among voters who live in 15 crucial swing states, where Biden has the support of 49 percent of registered voters whereas Trump has 48 percent. 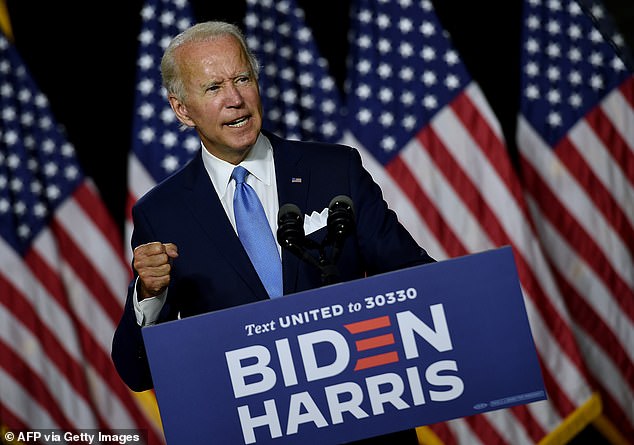 The CNN survey indicated that Biden has a smaller lead over Trump than previous polls have shown. Above, Biden speaks during a press conference in Delaware

Trump has strengthened his support from his partisans, according to the findings.

While 8 per cent of Republicans or Republican-leaning independents said they would back Biden in June, now only 4 per cent say they will support the Democratic candidate.

The poll also found that it was men who had changed their mind to lean more towards Trump since June, with 56% backing Trump and 40% backing Biden.

Voters between the ages of 35 to 64 were Biden-leading in June but now tilt towards backing Trump. 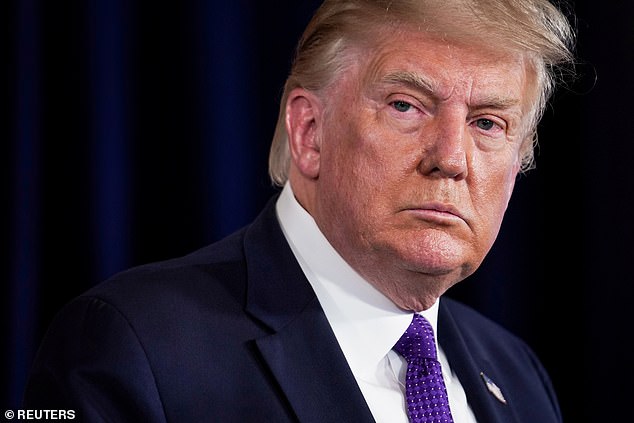 Overall, Trump has advanced his backing among conservatives from 76 percent to 85 percent

But the findings also suggest that President Trump’s voters are more likely to say that they could change their minds by fall.

Overall, Trump has advanced his backing among conservatives from 76 percent to 85 percent.

The CNN poll was carried out on a random national sample of 1,108 adults reached on landlines or cellphones.