Trump hasn’t given NSA authority to go after Russians

The U.S. response to Russian meddling and disinformation campaigns has not been strong enough to deter Moscow’s activities, a top intelligence official said Tuesday.

‘I believe that President Putin has clearly come to the conclusion that there’s little price to pay and that therefore, “I can continue this activity,”‘ Adm. Mike Rogers told Congress. ‘Clearly what we have done hasn’t been enough.’

Rogers, director of both the U.S. Cyber Command and the National Security Agency, said he’s taken steps to respond to the threat, but that neither President Trump nor Defense Secretary James Mattis has granted him any additional authorities to counter Russian efforts to sow discord in the United States.

Adm. Mike Rogers, commander of the United States Cyber Command and director of the National Security Agency, made a fresh warning about Russian meddling when he appeared before the Senate Armed Services Committee on Tuesday 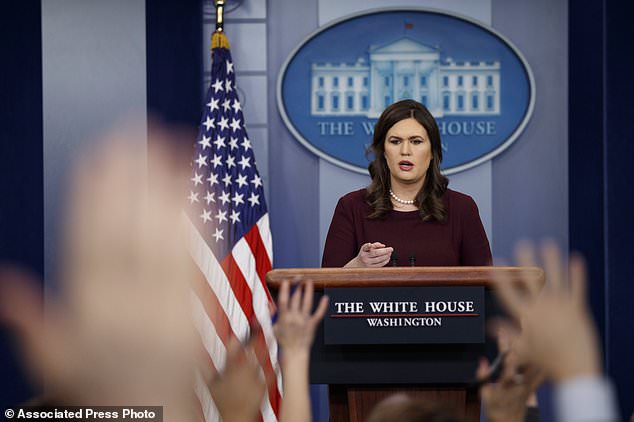 ‘I’ve never been given any specific direction to take additional steps outside my authority. I have taken the steps within my authority, you know, trying to be a good, pro-active commander,’ Rogers said at a Senate Armed Services Committee hearing.

‘I have not been granted any additional authorities,’ he added.

‘Nobody is denying him the authority,’ Huckabee Sanders said.

‘I can tell you that we are taking a number of steps to prevent this and we are looking at a variety of other ways that we’re going to continue to implement over the coming weeks and months,’ Huckabee Sanders added during Tuesday’s press briefing.

Sen. Jack Reed of Rhode Island, the ranking Democrat on the committee, said Rogers’ testimony was an indication that the U.S. had not yet taken action against Russia for its meddling.

Rogers said he didn’t fully agree with the characterization that the U.S. was just sitting back and waiting.

But he said: ‘It’s probably fair to say that we have not opted to engage in some of the same behaviors that we are seeing’ from Russia.

Rogers said he doesn’t have the day-to-day authority to try to deter Russian activities at their source.

He said that authority is held by Trump and Mattis.

‘There are some things I have the authority to do and I’m acting on that authority,’ he told lawmakers.

He said U.S. sanctions and recent indictments of Russians have had some impact.

But Rogers said: ‘It certainly hasn’t generated the change in behavior that, I think we all know we need.’

Rogers is retiring and his appearance before the committee was expected to be his last.